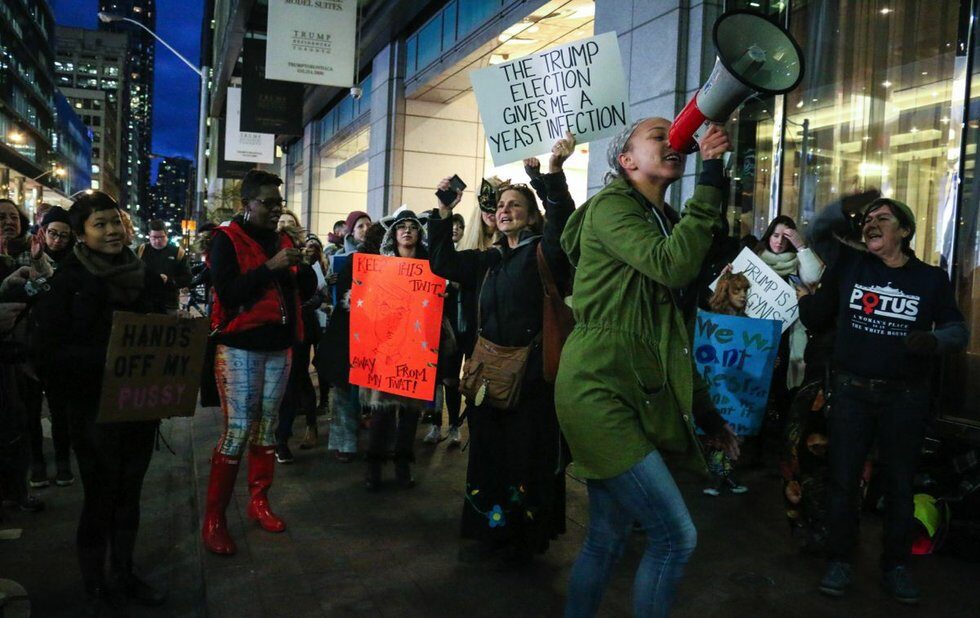 That there aren’t more protests at the Toronto’s Trump Tower is a mystery. Any group with a grievance against any aspect of the hegemonic status quo could fairly and reasonably channel their frustration toward the southeast corner of Adelaide and Bay, where Talon International Development thoughtfully erected a 65-storey lightning rod for rage.

But on Monday, October 24, the rallying cry was specific.

“Smash the tower! With pussy power!” chanted the three dozen women gathered on the sidewalk, as percussionists/activists Rhythms of Resistance kept the samba-inspired beat on their drums. 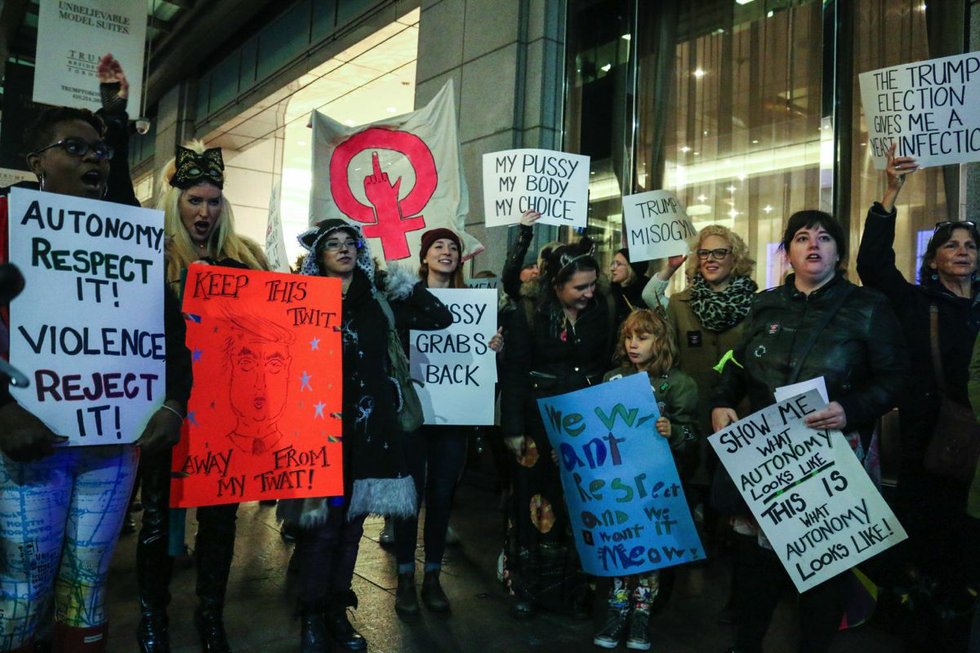 Pussy Grabs Back Toronto was a show of solidarity with women holding similar demos across the U.S. who continue to face the real possibility of a uniquely unqualified misogynist taking control of their country’s highest office. More than that, the event was an effort to place Donald Trump’s views on women and the sexual assault allegations against him into an examination of a larger rape culture that nourishes, protects and even rewards such attitudes and behaviour.

These are edited excerpts from some of the speeches:

Most of the negative comments and the shitty remarks I have gotten on the internet since promoting this event this week have had the same general message: “What the hell do you care? This is not your election.”

But in another sense they are wrong as hell, because even though it isn’t a Canadian election, it will impact us nevertheless. It will impact the flood of anti-choice protesters who’ve been pouring onto Toronto’s streets in the last few months by putting the weight of the Oval Office behind their calls for the end of a woman’s right to choose.

It will impact the conservative voices in this city, the voices of men like U of T professor Jordan Peterson, who think that dehumanization of trans and non-binary people by erasing their correct pronouns is an issue of free speech rather than an issue of basic human respect.

It will impact men like Jian Ghomeshi, who spent precisely zero days in jail for his conduct. And will impact women like his accusers, who will face an invigorated opposition if they choose to come forward.

Finally, it will impact every single one of us here who have had to sit through a crappy conversation or a painful family dinner with crappy people who just don’t get it and who will feel validated in their ignorance by a president like Donald Trump.

Co-producer and subject of upcoming documentary Slut Or Nut: The Diary Of A Rape Trial

How many more women need to come forward before we start recognizing sexual assault as a serious problem?

The risks that these women are taking to call out Donald Trump – that is brave. We need to acknowledge that, because you’ve got a lot to lose when you come out and say, “This person raped me,” especially when the person is running in a presidential election.

So we need to take this conversation out in public, not just on the streets but within our own circles and families.

First witness in the Jian Ghomeshi trial and founder of Coming Forward, which offers resources and advocacy for sexual assault survivors in the justice system

So you may have heard of a little trial I was in earlier this year, involving me and a not-to-be-named radio show host and Canadian celebrity.

While I was going through this trial, they suggested that it was fame I wanted, it was money, it was to better my career. (I am a mother of two and didn’t really want to do much more than that.)

Donald Trump has numerous women coming forward against him, and what is he saying? “They’re liars, they’re horrible, horrible people. They want fame. They want this, they want that.”

Why is it that we cannot just go and report and be taken seriously and validated? Why do we have to beg? Why aren’t all sexual assaults tried in a court where somebody understands the behaviour of a person who’s gone through trauma and does not act the way people expect them to act.