Jonah Hill gears up for his directorial debut

The War Dogs actor talks about coming up with a distinctive laugh, handling complex characters and writing a play with Spike Jonze 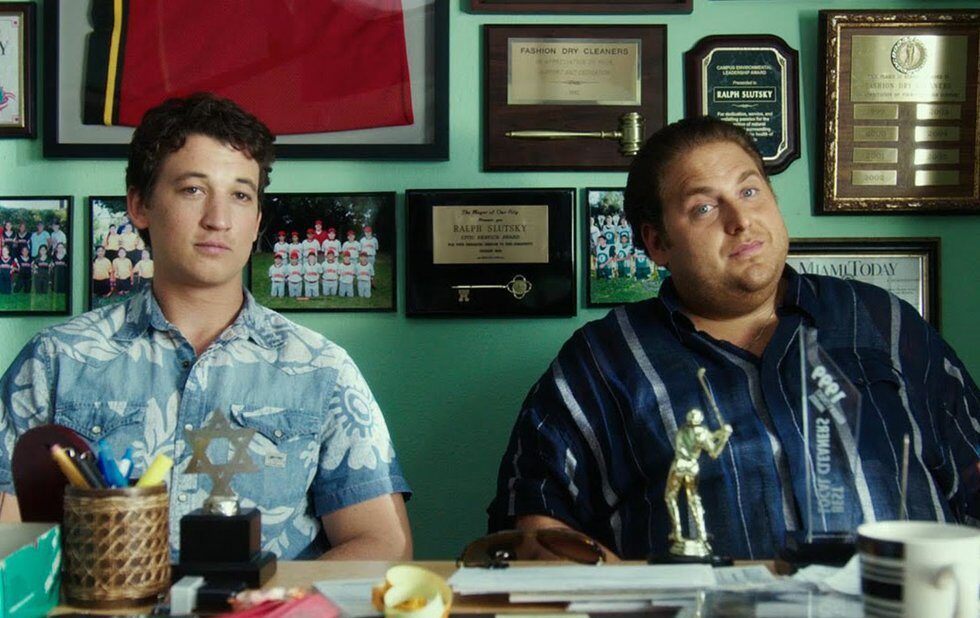 Jonah Hill has spent the last few years shifting between serious roles and comic parts – an Oscar-nominated role in The Wolf Of Wall Street here, a 22 Jump Street there – and this summer finds him doing both.

Last week Hill invaded the megaplex as the voice of a lusty hot dog in Seth Rogen and Evan Goldberg’s Sausage Party, and this weekend he toplines Todd Phillips’s War Dogs as real-life Miami arms merchant Efraim Diveroli, who pulled his friend David Packouz (Miles Teller) into the world of high-rolling military supply – and questionable ethics.

I sat down with Hill at the Shangri-La on a miserably humid morning to discuss talking wieners, career trajectories and passion projects.

So you share story credit on Sausage Party with Rogen and Goldberg. That film might be a more subversive picture than War Dogs.

They did all the work. I just had the idea with them they put all the time and effort into making it great. Not that I don’t think it’s awesome, which I do – [but] I worked on it for probably, like, four days whereas they worked on it for, you know, eight years or something. I just want to give my friends the credit they deserve, whereas this movie I actually worked on [laughs].

How deep did you go with your ­research into War Dogs? You have a pretty distinctive laugh in the movie – was that pulled from the real Efraim Diveroli?

No, I never got to meet him or anything like that, unfortunately. I would have loved to. But I got to meet David Packouz, whom Miles plays, and a bunch of people who knew Efraim. The laugh came about because one of the things David said to me was that if you met Efraim once you never forgot him, so I started to think about people I had met throughout my life that I never forgot. And a common trait a lot of them had was a very distinct laugh. So I tried to create a laugh that was very distinct – like, a laugh that actually fits the person, that would come from him.

The laugh feels like a calculated thing, but from the character rather than the actor. He’s the one performing.

Yeah. I saw it as him trying to disarm people and make them feel warm and comfortable so he can manipulate them.

Just last year you were playing a journalist being manipulated in True Story, and now you’re playing the character doing the manipulating.

I guess. You really like comparing movies to one another! [laughs] They all have nothing to do with one another, though. They’re all individual, you know.

They may be unrelated but they’re all movies you’ve chosen to make, so there’s that.

Yeah, but I personally think you have to separate each thing. I really try to have different challenges each time, you know?

Well, it’s certainly true that the path of any actor who isn’t writing and ­directing his own projects will come down to what he gets offered.

But again, to connect things, it does feel like with Moneyball and The Wolf Of Wall Street and this that filmmakers are seeing you as someone who can handle a lot of complex expository dialogue and still create a distinct character. Do you feel like that’s a niche people put you in, or were you attracted to those roles?

[Thinks.] I dunno. I love making movies that are based on true stories – I just find life really fascinating without having to, like, fly around in a cape or anything like that. I mean, I don’t know how people perceive me – that’s kind of a hard thing to think about. I just try to make things that I’m proud of, and I happen to be proud of this movie, the performance. What’s cool now is I kind of have a clean slate. I don’t have anything lined up. I’m gonna direct my next movie, and I’m not in it or anything. But after that I don’t know what I’m gonna do – and it’s kind of exciting, not knowing.

Can you talk about the movie you’re going to direct?

It’s a personal story. It’s a coming-of-age drama that takes place in the street skateboarding world of Los Angeles in the mid-1990s. It’s called Mid 90s, and yeah, it’s really exciting. I grew up skating in L.A. in the mid-90s, it’s how I made a lot of my friends and ­surrogate family.

How did it come about?

I wrote a play with Spike Jonze two years ago, and he’s kinda the godfather of that scene. I was telling him this was what I was thinking of making as my first movie, and he was really encouraging. I wrote the first draft at his house. I had to find out what I was passionate enough about to spend years of my life to tell as my first story, you know? Just purely for love.

I was reading Judd Apatow’s interview with Jonze in Sick In The Head, and he’s such a fascinating talent. To come from skateboard culture and do what he did with movies, it’s really ­incredible.

He’s the greatest. He’s a close friend and may be the most creative person I’ve ever met, and so genuine and giving with his advice and things like that.

Is he producing your movie?

No, Scott Rudin – who’s, like, in my opinion the most legendary producer ever – and Bennett Miller, who directed me in Moneyball, they’re producing it with me.

When are you going into production?

I shoot in mid-February. It will be nice to get out of the cold – I live in New York and you live here, so you get it. Is winter worse here than New York?

Yeah. New York is usually 5° warmer than Toronto. Winter’s not so bad there, but summer is even more horrible than it is here.

Yeah, I’ve been on tour so I haven’t been there. All accounts are that it’s not pleasant to be there right now [laughs]. But, you know, I love New York in the summer. I don’t mind the heat. I’ll take it over the cold.