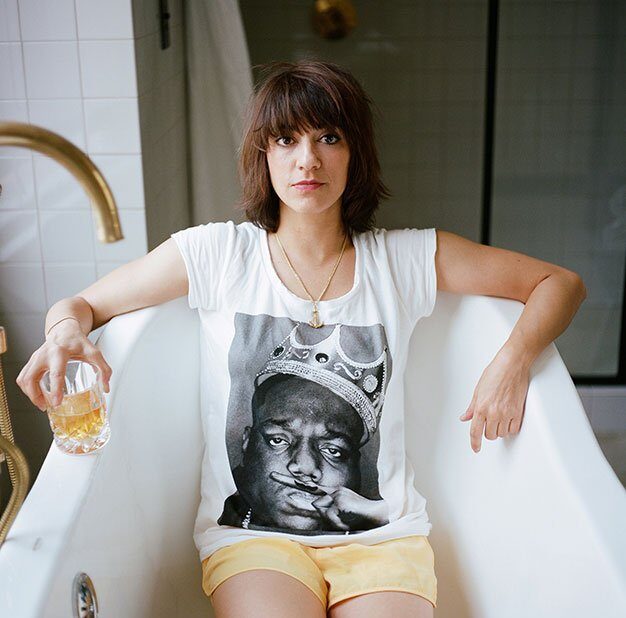 With her knockout first feature A Girl Walks Home Alone At Night, writer/director Ana Lily Amirpour synthesizes a century of cinematic influences into a sultry, sinewy horror movie about an alluring vampire (Sheila Vand) and the young man (Arash Marandi) who becomes fascinated with her.

There’s also a sociological component that’s as sharp as the eponymous Girl’s fangs: the movie is set in a fictional Iranian city, and its vampire preys exclusively on men who would harm women. A few days before her movie’s Toronto opening, Amirpour was more than willing to dig into her movie’s subtext – and then some.

So where did the idea for A Girl Walks Home At Night come from? It’s a strange, slippery kind of film that takes a number of very different ideas and turns them into this unique new thing.

A film is a weird thing, because it’s like a ticket to adventure. Certain things fascinate you, and you kinda don’t know where it’s gonna lead. It’s like when you go into your dreams. There’s all this stuff that’s connected to you, but sometimes your dreams have all these really weird things in store.

It felt very much like a dream to me – this amorphous landscape where people’s roles are constantly shifting. Or at least your characters keep revealing new aspects of themselves.

I like hearing that, because that seems more true to life to me. Each person you encounter, even in day-to-day [life], is unknowable. The world is this vast, complicated, constantly changing thing, and the best chance you have of understanding anything would probably be most yourself – and even that is extremely challenging and complicated. It feels more like what life is to me, and maybe that’s why it’s like that in the film. Film is such a manipulation: you’re coming in at one moment and leaving at another moment, in two hours, and then the rest of life goes on. I think it’s fun when characters can go on in your mind, like life doesn’t have this finite point. Except for death, of course, I guess. But I conveniently have a vampire in my film, so I figured out death, at least. [laughs]

I do love the sense that there’s a history to the Girl, even if we don’t get to see it. Her fashion sense reaches back through the decades, and there’s a Madonna poster on her wall from the Vogue days. She’s certainly older than she looks.

She’s 187 years old. I do backstories for every character, and when I did it for her it was this long, elaborate story. I wanted to use all those stories, so I made a comic book out of [them] so I could go on with her stories and adventures – where she’s been and what she’s seen. I wanted to use all those stories, so the comic book is a really great way to let her continue. It’s all prequel stuff – it jumps around in time, how she ends up in Bad City, and all this stuff about her. It’s fun.

I look forward to reading it. There’s a sort of surreality to the movie, and to the look of Bad City, that seems like it’d work really well as a comic.

It was always my plan to find a kind of almost Sergio-Leone-Western [location], to take a really archetypal, small ghost town and turn it into an Iranian city. I never thought of shooting in Iran. The film – what it is, the people, the whole mythology about it – was a result of many things. It is the way it is because of the fact that I’m a kind of limbo type of Iranian I didn’t grow up in Iran, I don’t have that version of Iran as my reality. But I’m also not just American in that way that somebody is who is from here. So it’s a mix of things, and I feel like in many ways the film is actually a very accurate description of my own brand of how Iranian or how American or how whatever I am.

And you’ve literally created your own Iran, by shooting Bad City in Southern California. The disconnect between the locations and where they’re supposed to be isn’t obvious, but we can sense that something is off.

Yeah, I love that. And it’s also the thing about a fairy tale, telling a story where the film doesn’t have to be in any way beholden to physics or laws or any reality in the real world. It’s just like the way Rapunzel can have absurdly long hair, and that somebody would climb up it: it’s absurd if you think about it, but these fairy tales have been told for hundreds of years, and I think [they become] about something else. That whole disconnect suddenly does set you free, and it also pushes you into a new place. I feel like your thoughts get erased into new directions when what you expect or assume is suddenly turned off-balance. I love that.

Certainly the Girl presents herself as something she isn’t – demure, submissive, docile – to lure her prey.

Yeah, she’s definitely not as she appears. But no people really are, you know?

The movie is similarly tricky about the way it handles violence. That dreamlike quality is shattered by some very gruesome moments.

I’ve had many different experiences with reactions to the film. Like, a hardcore blood-seeking genre fan will find the film extremely subtle and boring and not graphic at all, and then, you know, maybe someone who’s kind of seeking more arty, expressive filmmaking would be more, ‘Oh!’ I mean, I feel like violence is part of everything and every story. We all come to terms with our physical mortality at some point. You can break an arm, or you can have your dog die, or your parents, your family – there’s accidents, and this violence is part of everything. Those visceral moments are in almost everything I’ve done, and my next film is even more intense. I think how you explore violence is also limitless. I mean, people do it in different ways – like [Nicolas Winding] Refn with Drive, it’s like this hypnotic kind of thing. And then Tarantino has his way of going into it, and I think Lynch goes into it too, just all the psychological stuff, and the emotional stuff, and then there’s violence. Just violence. You saw Wild At Heart?

The scene where they come across the girl who’s been in the car accident, and she’s bleeding and dying and just speaking gibberish. You remember it?

Yes, it’s Sherilyn Fenn. It’s probably the most disturbing moment in the film, this little vignette. It’s not even their story they just stumble onto it, and are forced to stand there and do nothing. Nobody’s being heroic, there’s no salvation – it’s just awful.

That moment was so impactful and tense and surprising. It was so many things for me. I remember when I was a kid – one of my first, really pronounced memories – I guess I was like four or five years old, and I was in England, and I was in the backyard and I saw this furry insect. It was really cute and soft, and it had fur, and it was just the most amazing thing I’d ever seen. It was like something out of a fairy tale, and I just couldn’t believe it. I grabbed it into my hand, and I started petting it. It was really soft – as I thought it would be – and it was on my thumb, crawling around, and then suddenly I just felt this excruciating pain. Like, unheard of, searing pain – it turned out that that was a bee. And that was how I discovered what a bee is. And I think [laughs] I think it’s just so interesting, you know? Like, how do you see something – I really didn’t know what a bee was, and I just thought it was a soft, cute-looking fuzzy creature. Because that is what a bee is, if you don’t know all the stuff we know about them.

And if you did, of course, you’d never try to pet one.

I can remember it so graphically, too, that feeling when this thing became something completely different. And the scene in Wild At Heart – you’re driving along the road, and it’s just about that one thing, and suddenly this whole other thing about life, this absolutely chaotic stuff. Yeah. Violence and pain – it’s intense. It’s interesting.