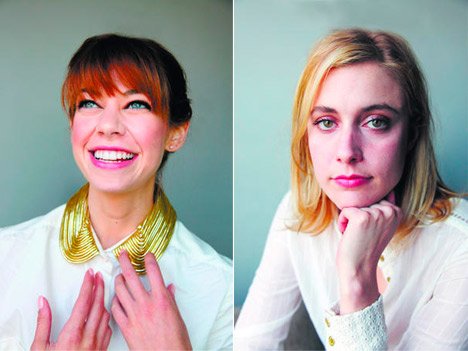 Damsels, yes. Distressed, not so much. In fact, Greta Gerwig and Analeigh Tipton are positively giddy the day after screening their new comedy, Whit Stillman’s Damsels In Distress at the Toronto Film Festival.

In the movie, Gerwig – who came up through the mumblecore movement and has been edging into Hollywood via Greenberg, No Strings Attached and the Arthur remake – plays Violet, a well-intentioned sorority sister who’s decided to improve her East Coast university campus by dating young men in desperate need of betterment.

And Tipton – a former America’s Next Top Model contestant who broke out as a lovesick babysitter in Crazy, Stupid, Love. – is her newest recruit, who soon discovers that accommodating the stupid isn’t exactly the path to happiness.

Whit Stillman’s movies have a specific rhythm to them – the dialogue is very precise, the editing very crisp – and you both pick up that rhythm really well. Did either of you prepare for Damsels In Distress by watching his earlier pictures, like a sort of Stillman boot camp?

Greta Gerwig: I love his films, but I tried to stay away from them for the couple of months leading up to it, because the dialogue is so precise and people who have been in his films execute it so well that I didn’t want to have their rhythms in my head. I didn’t want to be imitating them as opposed to playing a scene, like a copy of a copy. I wanted to be true to the characters as they existed on the page. But, yeah, the first 48 hours were hard, with the dialogue, and then it got easier. The words just started coming, and they seemed natural.

Analeigh Tipton: I needed to watch the films, mostly because I wasn’t familiar with them. When I first read the language, I wasn’t sure how to approach it. And, yeah, the first few days were tough – especially because I came off of Crazy, Stupid, Love., where my character literally stumbled through her lines. So I had to sit down with someone and do sentence after sentence after sentence – really write them out – and then once I got the words down, I had to go back and find the [emotional] reality. But it was fun – it was like a puzzle.

Gerwig: He’s very precise. I felt like he kept telling us to do less, actually. I mean, he doesn’t want jokes sold as jokes, and he certainly doesn’t want you to have any awareness that they’re funny when you’re saying them. I think the key to playing all this stuff is to play it with utter conviction: [the characters] believe they are in a drama. They do not believe they’re in a comedy. I think that’s what he was always aiming for.

Tipton: Yeah, a lot of the humour comes from the fact that everything we do we believe thoroughly. You know, we’re not saying anything that’s ridiculous to us. And I love that because of his editing, you don’t even have time to realize there’s been a joke. He’ll just roll right over it, and it’s not till later that you’re like, “Oh! That was a joke!”

Your characters have a mentor-mentee relationship that feels very natural. Did you two spend a lot of time together during the shoot?

Gerwig: The thing about movies is, the first day you spend 14 hours together. It’s like camp. You get so close so fast that you don’t have to force relationships. They just emerge.

Tipton: Yeah, I agree. I think all of us were especially close in general because of our excitement about the project. That helped drive us together. Or maybe we were just a lucky group that kind of got along. It could be that simple.

Greta, you came to this just after wrapping the Arthur remake, which was savaged on its theatrical run despite being kind of okay. What was that like?

Gerwig: It was weird the amount of vitriol that met it was really strange. Liking the movie or not liking the movie aside, it felt like people went after it in this extreme way.

But you escaped the firestorm unscathed.

Gerwig: I did. I felt like I was rescued from a burning building. I felt like some critics were saying, “We’re taking you with us!” I think it’s always rough to be in a roughly reviewed movie, but it’s how you earn your stripes. I mean, no one who acts or does anything [in film] hasn’t been badly reviewed at some point or been in a movie that doesn’t get good reviews. In some ways it’s kind of a relief to get bad reviews, because that’s the thing you’re always worried about. And then it happens and you’re like, “Well, that’s what it feels like to be panned [laughing]!” And then it’s not scary any more.