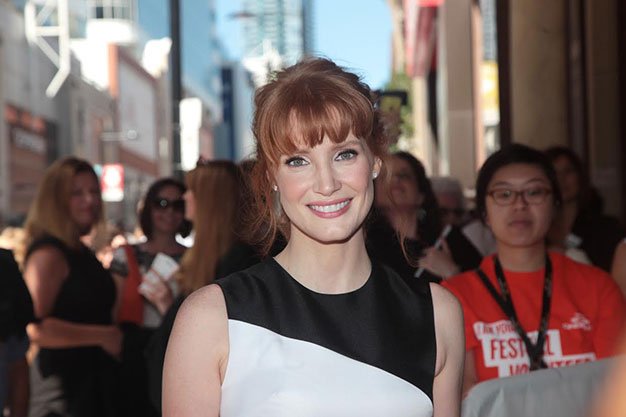 Jessica Chastain has spent a lot of time thinking about Miss Julie. And you can feel that dedication in her phenomenal performance as August Strindberg’s imperious noblewoman (opposite Colin Farrell and Samantha Morton’s indignant servants) in Liv Ullmann’s new screen adaptation of the play.

Reached over the phone in Paris, Chastain only has a few minutes to talk – but she starts by asking what the weather is like in Toronto. I’m happy to give her good news.

Oh, good. Those Toronto winters can be pretty deadly. [laughing]

Oh, of course, you were shooting Crimson Peak here last year, weren’t you?

But you were inside, at least.

Mostly indoors, you’re right. But it still meant that I was either in the studio or at home. No outside. [laughing]

So tell me about making Miss Julie. Literally every time we’ve talked in the past, you’ve brought up the play – once it was as an example of a character you found spellbinding, and another time as your exit strategy if the movie career didn’t pan out. And now you’re doing it in a movie, and being directed by an actual legend.

I mean, it was an extraordinary experience to work with Liv. I feel like I acted the character with her, like it was a partnership. It wasn’t a normal situation where it would feel like I played the role and she was the director. She’d never played the role, so it definitely felt almost like a sisterhood, like we were sharing the character. It’s unlike anything I’ve experienced.

I was sure Ullmann had played the role. I’m kind of stunned that she never has.

I know, I know! She’s kind of perfect for this role. It stuns me that she’s never played it.

Are you familiar with the earlier film adaptations?

How did you approach this version?

Colin and I didn’t even kind of realize what it was gonna look like, or what it was gonna be like we just kind of went with it, you know? We rehearsed it like a play we just wanted to work with her to create her interpretation of this story.

And now you’re about to make a movie with another actor-turned-filmmaker, Xavier Dolan.

He makes tiny Canadian psychodramas and you’re off working with the likes of Liv Ullmann and Kathryn Bigelow and Christopher Nolan. How did you guys even get together?

Well, I watched Mommy in Cannes [last year] and I was so impressed. All I did was tweet that I loved the film, and then he tweeted me and asked me to be his beard [laughing]. As soon as I saw that I thought, “Oh my gosh, this guy’s fun.” And we started a friendship and then we made plans to meet in New York for dinner, and I opened the door and he was standing there with a huge bouquet of flowers in front of his face. So sweet. We just became fast friends I mean, I wanted to work with him – it started as me saying “This guy’s a great filmmaker, I really believe in him” – and now I’m just really glad he’s in my life. He’s actually a really, really cool person.

What can you say about the film you’re making together?

Well, I don’t want to say too much about it because I think that’s more his place, but we’re going to do a film called The Death And Life Of John F. Donovan, and I guess I play the villain of the piece. I don’t know when we’re gonna do it, but I’ll be there when he tells me it’s going. [laughing] I’m excited to do it.