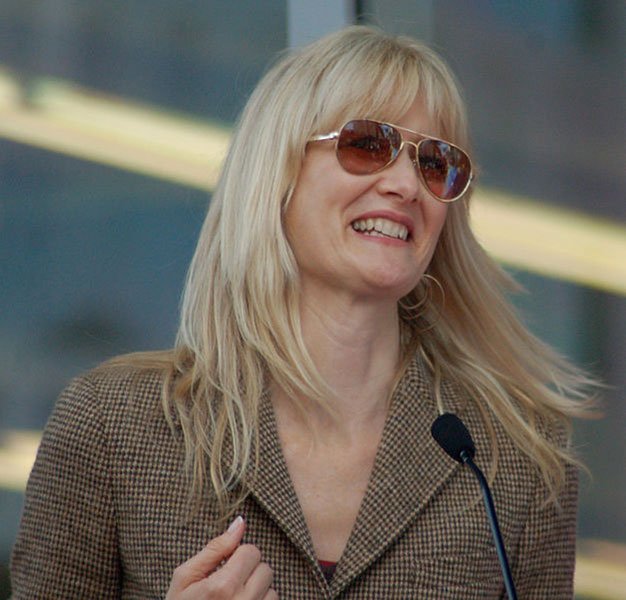 Laura Dern is only nine years older than Reese Witherspoon, but thanks to flashbacks and a fragmented timeline, the star of David Lynch’s Wild At Heart and Inland Empire is entirely credible as Bobbi Lambrecht, mother of Witherspoon’s Cheryl Strayed in Wild.

The day before the TIFF premiere of Jean-Marc Vallée’s impressionistic character study, Dern – who is even taller in person than you’d expect – is positively bursting with enthusiasm for the project, and for Vallée in particular. So we get right into it.

How did Jean-Marc Vallée come to cast you as Reese Witherspoon’s mother in Wild?

He just found me. And thank god, you know? He and Reese and Bruna [Papandrea], the producers. I hadn’t read the book, so that was the great privilege of my life, just to get to read Cheryl’s book.

Did you know what you were in for? Were you already familiar with Vallée’s work?

The first time we spoke about it, we had a Skype call. And he started talking to me about Café De Flore, which I hadn’t seen, and I was like, “I have to see this movie right away.” He sent me a [viewing] link, and I watched the movie, and at about 2 in the morning I was in Pittsburgh sobbing in a motel room. I was like, “I have to talk to you, you’ve made the most important movie!” I was just weeping. And then we talked again about Cheryl, and mothers, and this love story, and I wept again. I just was so moved at his fierce commitment to Cheryl, that this be a love story between these two women.

How much research did you do into the real Bobbi Lambrecht?

I had, thank god, spent great quality time with Cheryl, so I was able to bring lines, thoughts, ideas from Bobbi into it, when given those moments. And I had this blessing of little Bobbi [Strayed], Cheryl’s daughter, playing Cheryl as a young girl.

Wait, really? I didn’t know that.

Yeah! The eight-year-old Cheryl is [actually] the granddaughter of Bobbi, Cheryl’s daughter. So the emotions surrounding that, and Cheryl being there watching her daughter play her as a little girl – it was just so powerful and moving. That’s all Jean-Marc too, going “Let’s have Bobbi play this part.” He’s just constantly creating.

With the real Cheryl around, did you make more of an effort to keep your Bobbi closer to the real person, or were you creating a character based on your own interpretation?

I think both. I mean, I never wanted to not play to the truth of it, [but] I have to bring my own truth to it. And when I understood both what I had to learn from Bobbi and where I related to her, I had my way in and I let Cheryl know. We shared a lot about our own lives, Reese and Cheryl and I, and I think it made Cheryl feel safer to know that Reese and I understood, in our own way, her journey. Thank god not all of us had to hike across the country a thousand miles. [laughing] I was like, “Cheryl, thank god you did the hike so I can just learn the wisdom from your book and not do the hike.”

What was the experience of working with Vallée like?

First of all, as you know, he’s the most delicious, authentic person. I just adore him. I find him incredible. I never for one second felt a moment of judgment of anyone. As a storyteller, he just accepts people for who they are and all they are. He’s the only person I feel who should have made this movie, because he sees Cheryl as this magnificent soul journey. He doesn’t go ‘Whoo, well she went through a tough time.’ You feel it in those scenes, you feel the dignity and the respect [for her] in very crude, hard scenes that could have been done so differently… I mean, there’s so much bravery in it. Bravery with my voice humming throughout the film, my singing – like, layers of commitment and diligence. You know, David Lynch is like that – every sound, every detail to the end of making the film, he never gives up. It has to be perfect.

Yeah – much more intense and assaultive. Just in the use of room tone.

It’s so insane, the hurrrrrrrrrrrr – oh my god, it’s so crazy. And until Jean-Marc I hadn’t seen someone’s love of sound as such an instrument to storytelling. It’s incredible. And the way he’s told such an internal story, and yet everyone feels let into the pain of [Cheryl’s] loss. And I haven’t said this [elsewhere], but I was invited by Jean-Marc to come to the editing room: “Please spend several hours with me.” He asks everyone to go.

Everyone? Were you all there together?

He set up a screening room for the two of us with a beautiful bottle of wine with the cheese and the chocolate and a box of tissues, and the two of us got to sit side by side with tissues and experience the film together, and then go to dinner and really talk about how it unfolded, and how I feel. He’s always collaborating and wanting to hear everyone’s point of view. “Did you miss this? Did you feel this? Do you like that?” I mean, many a director will let you see your film when it’s finished, and not tell you if things are cut, or how it turned out. He’s so respectful of everyone’s process, and everyone’s partnership. It’s gorgeous.

And how close to finished was the version you watched?

Pretty close. The sound wasn’t done just some temp music wasn’t done. Many layers weren’t there yet, and there were some things added, really, to Reese’s and my story, a bit. And I think he felt very proud of that. He said to me [does a perfect Vallée whisper] “I used everything. Everything we did, I used.” I mean, cause we did stuff all the time – “Let’s go around over there, let’s go over to the middle. Splash them. Cut the apple!” And it’s all in there. It’s beautiful.