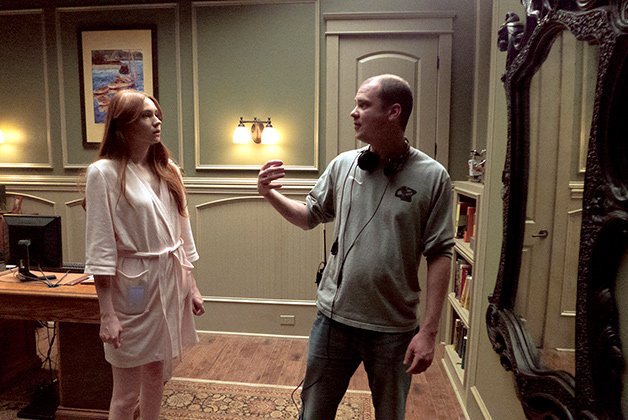 Mike Flanagan’s Oculus is a savvy response to the wave of slow-burn horror sparked by the success of the Paranormal Activity movies, with dynamic characters who aren’t content to sit around waiting to be eaten by an off-screen monster.

In fact, the monster is right onscreen with them – an ancient mirror with a centuries-old body count that a young woman (Karen Gillan) is determined to hold accountable for the deaths of her parents (played in flashback by Rory Cochrane and Katee Sackhoff). The movie takes place on the night she brings her brother (Brenton Thwaites) to confront the mirror – and the mirror confronts them right back.

Over the phone from Los Angeles, writer/director Flanagan and I talked about telling stories that take their time, resisting distributor pressure and nerding out over casting Amy Pond and Starbuck.

Oculus is based on a short film you made in 2006 called Oculus Chapter III: The Man With The Plan. What happened to Chapters I and II? How many were there going to be?

It’s funny – we did a really dumb George Lucas kind of thing where we wrote nine scripts for these little short films. We only made one, the third one, and it’s led to tons of confusion… so I wish we hadn’t [laughing]. But, yeah, it was intended as one of a bunch of stories about the mirror. I was just never able to put together the money to do any more. It took seven years to find producers who wanted to expand the short but not do it as a found-footage movie, which I really didn’t want to do. The short will be available on the Blu-ray and DVD for everybody, which I think is cool for such a little movie, and to see what it grew into will be really neat.

I can’t conceive of Oculus as a found-footage project.

I know! I couldn’t either [laughing]! Everybody just said, “Low budget, found footage.” One in five of those was rocking the box office, and people were like, “We want that.” We’d say, “But this different!” “Well, we don’t necessarily want different.” “Oh, then I’ll just pack up my little bag and be on my way.”

You’ve done a little tweaking since the TIFF premiere, but the movie only runs about a minute shorter.

I forget who said it, but there’s that saying: “Films are never finished, they’re abandoned.” There’s always something you think you can improve on, but I don’t think you should try. George Lucas started doing it, and didn’t stop. You can tinker indefinitely, and it doesn’t necessarily make it better. I think when a filmmaker gets into that rut, [if] there’s no one there to stop him he’ll go on forever. You have to draw your own line in the sand and say, “The movie’s done, and that’s that.” We drew our own line before TIFF, and I was very pleased with that. But the thing [about] bringing a distributor on after a movie’s complete is that they’re gonna want to get in there and get their fingerprints on it – especially with the amount of money and resources they’re gonna have to put into a wide release. They need to feel some kind of ownership over that.

It’s tough. It’s very tough. We survived. I’m ecstatic, actually, because it could have gone a number of other ways. I saw drastically shorter cuts, you know? And it was like, “Oh my god! What’s happening to the movie?”

They were that bad?

Yeah. Oh, it’s brutal. And because I always cut my own stuff, it’s particularly hard for me to let go. I wasn’t involved in that, because I was shooting Somnia at the time and just wasn’t physically available to do it. That’s the only reason they went with another cutter. And I came back and was like, “Oh, okay, let me do a shorter cut – if what you want is ‘shorter,’ let me show you what I would do.” And ultimately what was revealed was that they wanted to try everything on, much the way we do in prep and production to make sure we’ve covered all the bases. But at the end of the day, they emerged with a lot of faith in the movie as it [always] was. And I was grateful for that.

Oculus is a slow burn, as many horror movies are these days, but I really appreciate the way it avoids those obnoxious fake jump scares. You credit the audience with some patience.

Thank you for that. At all turns we’re gonna give the audience the benefit of the doubt and kind of go on faith that an audience appreciates intelligent material, likes being challenged and engaged, and will hang with it. There’s always a lot of nerves before you screen it for the first time: “Oh, god, did we not give them enough? Did we rely on patience that won’t be there?” I like to believe that if you give the audience the benefit of the doubt, you can’t really go wrong. And it’s really nice to see that validated, because it’s a philosophy I want to continue to work on.

Your casting choices were interesting too – there’s Karen Gillan from Doctor Who and Katee Sackhoff from Battlestar Galactica, and Rory Cochrane from pretty much everything. And then there’s Brenton Thwaites, this unknown Australian who totally holds his own against them.

You’ll see Brenton in every movie released this year. Everywhere. It was funny, because when we cast him I was like, “Why hasn’t he broken out yet?” And one of the producers was like, “I have a feeling he’s about to.” And between when we wrapped and when we opened, he’s shot like six movies. Big stuff, too. We got him about six seconds before he exploded that’s pretty great.

And Thwaites spends all his screen time opposite Karen Gillan, who brought heart and depth to Doctor Who and plays a very different role here.

I’m a big Whovian, so it was beyond awesome to meet her – even to be able to present the project to her. When she signed on, I was like, “Oh, we’re gold. I have nothing but faith that she can carry the whole movie if she has to.” And she doesn’t have to! She’s great – I think her work is just so strong.

What she does could work even without the story’s supernatural aspects. The mirror doesn’t have to be evil for her to go where she goes.

Everybody we cast, what they responded to most was: “We want to do this not because it’s a genre film but because if you stripped the genre elements out we’d still be really excited about playing these characters.” That’s how we knew we had the right people, and that was kind of the criteria we held everybody up against. Every first instinct that a lot of people would have [for] these characters, our cast kind of consistently went a different way. Like when we talked to Rory initially, people would read that [part] and immediately think, “Okay, it’s Jack Torrance he goes crazy.” And Rory came in and said, “Well, no, I’m not gonna play him crazy, because he doesn’t think he is.” Like this is an exercise in normalcy for him it’s only later that he can look back and think, ‘Holy shit, I’m crazy.’ But he’s never gonna know it in the moment.” It was great having somebody who wasn’t gonna try to out-crazy Jack Nicholson he was gonna out-normal him.

And you put him opposite Katee Sackhoff, another actor who showed amazing range in a genre show.

On the page, [Sackhoff’s character] Marie kind of came off as very mousy, but when Katee came on it was like, “Well, no, she’s a strong and interesting character now, and Katee gets to explore a vulnerability we haven’t seen from her.” That was a blast, to watch her dive into it. I think having somebody of Katee’s composure and strength going through that made a huge difference for us. I’m a big Battlestar fan, so it was very much, “Oh my god, I can’t wait to see Starbuck just go for it. It’s gonna be awesome!”

It almost sounds like you had your own little nerd playground on the set.

I allowed myself, like, one day to be an elated fanboy and just kind of sit back and be like [high-pitched voice], “Amy Pond and Starbuck are in the same room! This is awesome!” But beyond that I had to snap back in. I think the two of them would have been pretty disturbed if I’d remained in that zone any longer than I did. But it has been a really cool and surreal experience for me, just as a fan of all of them, to see them come together. It’s really cool.

Most of Oculus takes place in a single location, but you’re telling two stories there – one set in the 90s, and another in the present. Was it a tricky shoot?

It was 25 days, and the shoot itself was very hard the two timelines made it logistically very difficult. But it was really fun: we were making two movies and then mashing them together, and that was just really exciting. So I remember the shoot as being incredibly frustrating and difficult on a day-to-day basis, but it was the best kind of exhaustion at the end of every day. We were doing something really cool, and when that energy starts to come out of the cast it’s infectious.

And now that Oculus is finally in commercial release, what can you tell me about your next project, Somnia?

We’re just finishing the edit. It’s very cool. It’s a script we’ve been sitting on for a couple of years, and it’s actually my sentimental favourite. It’s very different from Oculus. It’s kind of more fantastic, but it’s got a big heart to it, and I’m really excited to get that out there. I think it’ll satisfy horror fans, but it’s going to appeal to a broader audience as well.