Actor, I’ll See You In My Dreams 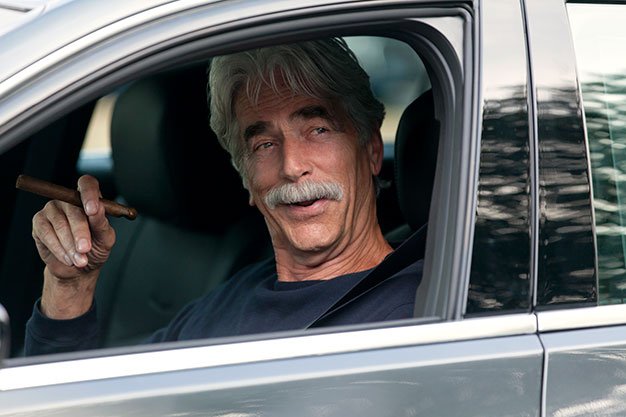 I’LL SEE YOU IN MY DREAMS Rating: NN. See listing.

You can’t read this interview without hearing Sam Elliott’s confident drawl in your head. Even over the phone from his Malibu home, that deep, resonant tone carries considerable weight, somehow loose and serious at the same time. That slippery quality makes him such a compelling screen presence you always want to know the angle he’s playing.

Today, the angle is “contented.” Elliott is coming off one of the best runs he’s had in a while: he played the big bad of Justified’s final season – which also gave him a complex romantic subplot opposite Mary Steenburgen – and now he’s in theatres as Blythe Danner’s love interest in I’ll See You In My Dreams, which is how we’ve ended up talking today.

It’s nice to see you suddenly popping up everywhere.

It just opened the Inside Out Film Festival here in Toronto.

Yeah? It’s a whole different cup of tea, compared to this one, needless to say.

You’ve been getting to show a wider range than usual. Certainly Justified and I’ll See You In My Dreams give you things to do on screen that you haven’t done in a long time.

Yeah, I’ve been in that western box for a long time – and you know, it kind of slopped over into other films, like The Big Lebowski or The Golden Compass, but it was always kind of that same western character. The military guys that I’ve played, and the bikers, are also kind of that same ilk.

Did you make a conscious effort to chase different sorts of roles, or did it just work out this way?

It’s hard for me to figure out why 2014 turned the way it did. All three of these projects, they just came, you know? Justified, as I understood from Graham [Yost] and the rest of the producers, they just took a shot and reached for me.

That must have been flattering.

People have these misconceptions of actors in general – that you’re not gonna be interested in working with them, or they think you’re busy all the time, they think you turn things down all the time. And, you know, that’s not the case. When Justified came my way, it was an opportunity to do something totally different and work with people I have great respect for on both sides of the camera. It’s incredible material, and that’s what gets me every time. A great script will get me to go to work, regardless of what it is. And it was fun to get back in the TV game for a time. It had been a while.

Did it feel different? Television can be very cinematic now – Justified certainly went for it from time to time.

I think this digital age is partly responsible for that. There was a period, obviously, when actors said, “I don’t want to do television, I want to just do films.” It’s hard for actors to say no to television now. Again, it’s just the quality of work. I think the best of it is on cable, but a lot of network television is pretty quality stuff. [And] actors like to work. It’s not about the money, because you don’t make a ton of money unless you’re one of the regulars on cable television. You certainly don’t make money doing these little independent films. For a lot of us it’s really about the work, not about the money. It isn’t for me at this point in time and really never has been.

You certainly made your screen time count on Justified. And the same could be said about your performance opposite Blythe Danner in I’ll See You In My Dreams, where you make a really vivid impression in, what, five scenes?

I really didn’t count ’em. Probably not more than that. But I’ve always felt, if you get three good scenes in a piece, then it’s worth doing. That’s always been my rule. But you know, it was an opportunity. Brett Haley and Marc Basch’s script came to me, and there wasn’t anything I was gonna do to not do this film, particularly once I knew Blythe had been set for it. I’d never crossed paths with her in the 50 years I’ve been in this business. Those opportunities, they’re just not coming around for me any more. It was a no-brainer.

Yeah, I can see that – I mean, how often do you get the chance to smoulder at someone these days?

And Blythe Danner doesn’t get that many chances to carry a film either, I’d imagine.

Yeah, no. She’s certainly done some great films over the years, but she’ll tell you first that her first love is the stage. I mean, she became a member of Actor’s Equity I think 50 years ago, and she still loves it. I think she was kinda bowled over by the reception that this film is getting. I don’t know that I’ve ever seen reviews on any film like this – certainly not any film that I’ve been in. It’s, like, not just an old folks’ tale. We’re all gonna end up here. We’re all gonna be faced with making those decisions, we’re all gonna face those fears that come to us at a later age. We’re all gonna experience losses, and that begins at an early age. You don’t have to be old to face loss, or be forced to live with the decisions you make. Life is a complex journey, you know? And it’s ever hopeful, as we see in this film. We’re beset by all these issues and all these things that trouble us, but there’s always hope as well.

It’s an interesting premise to build a movie around, especially at a time when fewer and fewer movies seem targeted or even interested in older audiences.

It’s one of the realities of the picture business. Older folks in life and particularly in the movies get marginalized and kinda pushed to the side in favour of younger actors, a younger crowd, kind of a different mentality about where that target audience lies. I’m hoping this is maybe gonna have something to do with that shifting a little bit. I heard somebody say on television the other day, on some news program, there’s like 10,000 baby boomers retiring daily, which is an astounding number. I’m not sure that’s true, but the fact is there’s a lot of them, and I think every one of them would react to this film in a positive way.

I can’t let you go without bringing up Frogs, which just came out on Blu-ray…

It’s very strange, that picture, huh? I think through an actor’s career, at least for mine, I can draw a line through a number of projects that are kind of connected. Frogs came to me not long after I’d done Mission: Impossible, through a connection I had with Fox, where I’d started out. [And] Frogs was directly responsible for me getting Lifeguard. Dan Petrie, the director, and his wife were watching late-night TV and thought I was a guy named Adam Roarke, who was also in Frogs – they didn’t have a clue who I was. [laughter] They got my name off the credits, found out the next day who my agent was, called me in and got me to meet on Lifeguard. It’s a strange game.

And I suppose The Legacy fits on that line, too, being in a similar genre.

I would think, yeah.

That was a formative experience for me. I was a kid when it came out.

Oh my god. Well, it was for me, too – that’s when I met my wife. And that gets us back to this subject matter about older actors and older people in general being marginalized in the world, but particularly in this business. Katharine [Ross] was the girl, you know? Whether it was Butch Cassidy or The Graduate, she was the gal – she was the “it girl” in town. She doesn’t work [now]. It doesn’t come her way any more, and she’d love to work. She does plays, she does theatrical stuff, but it’s a strange game.

You developed some projects as a couple in the 90s. Are you still looking for things to do together?

Yeah, we’ve got other stuff that we’re continuing to work on. I think I’m a little lazy in terms of generating work myself, but there’s stuff going on.

Whether it’ll keep rolling, who knows? But it was a great year last year, so we’ll see what comes around this year.