Co-writer/director/actor, What We Do In The Shadows 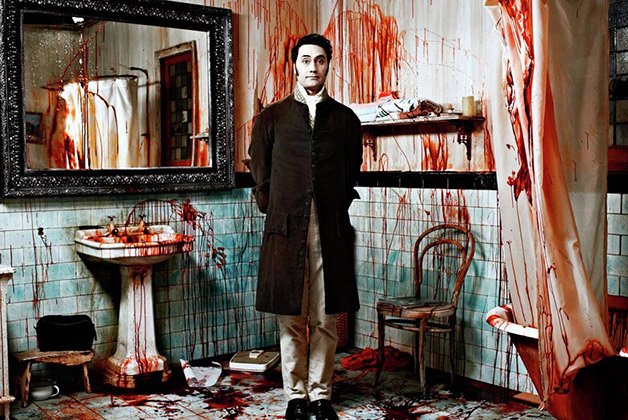 Taika Waititi wasn’t able to join his pals Jemaine Clement and Stu Rutherford for the TIFF launch of their improvised vampire comedy What We Do In The Shadows I get to sit down with him a month later, when the film opens Toronto’s ImagineNative Festival. (It’s his second time opening that festival, having brought Boy here in 2010.)

In person, Waititi – who shares the writing and directing credit for Shadows with co-star Clement – seems an awful lot like his on-screen alter ego, the sheepish bloodsucker Viago. No fangs, obviously, and we’re sitting outdoors in broad daylight, but he’s a pleasant, chatty fellow, generous with his time, happy to elaborate on the finer points of his art.

Jemaine mentioned that there are hours and hours of improvisation that didn’t make it into the film – “three DVDs worth,” was how he put it. Were you guys killing yourselves over what to cut and what to keep?

It was just nuts. [laughing] But like, when I think about it, I’m not sure if we got that much extra great stuff. Different versions of a joke, or whatever. There are definitely things, little nuggets we called them, that we would find trawling through all that material.

I can imagine spending a lot more time with these characters. You guys built a great ensemble, not just actors who looked right but who could keep working in character.

And casting’s important. I think it is a giant mix of all of those really essential qualities and aspects of creating interesting conflict within your scenes, and within the world, and creating a world that’s gotta have characters that are different enough to be interesting to look at, but also create that conflict.

In character, or with each other?

With some actors you can tell, just from their different backgrounds and their different approaches to working, they would have just a natural conflict, just a sort of friction. Not that they disliked each other, but you can see them getting frustrated with each other through the way we were working. And it was kinda perfect, because their characters needed to reflect that as well. So it kinda did end up drawing on who people naturally were, yeah. Because you always bring that. You make up a character, there’s always gonna be parts of you that, like it or not, shine through. There’s nuances and qualities that you can’t avoid.

How much of you is in Viago? He seems like a sweetheart.

One of my favourite books when I was young was Wuthering Heights. I just really loved the idea of dressing up. I remember watching the Laurence Olivier version, and I just loved the idea of wearing one of those frilly shirts with a tight jacket. I kind of mixed that sort of thing with Tom Cruise and Brad Pitt from Interview With The Vampire. And a bit of it’s also my mum, just the way that growing up she’d always make me do housework and do the dishes and keep a really clean house. And then also some people, flatmates who created [chore] wheels and were really anal about that sort of shit. Characters I create are just mixtures of the people I know. It’s a fun process for me, and sometimes it’s just easier: “Oh, I’m just playing my cousin.”

Do you ever get too specific?

I take care not to do stuff that I think if people recognize themselves they’d take offense. Little tics or little qualities that they can also laugh at, sure. Like, there’s this old flatmate of mine who had the [chore wheel] thing, and he e-mailed me and was like “You bastard.” [laughing]

The idea of having roommates forever is kind of a perfect comic engine, isn’t it?

Yeah, yeah. This is kind of about me and Jemaine and Johnny just playing vampires [in a version of] the story of how we all lived together when we were young. And then the idea of immortality some would see it as a gift, but I think the whole point of life is to die, in a way. We shouldn’t live forever. Not only because humans are just dickheads [laughing], but humans by design are just useless and lazy – and if you’re gonna live forever you’re just gonna be that way forever. It perpetuates the laziness and encourages you to put things off.

A big gag we have with all these vampires is, you know, Jemaine’s character in one of the deleted scenes – it’ll come out on the DVD – he’s painting, and he talks about his art and how he’s been painting for 80 years, but his drawings are super-shit and amateurish. [laughing] I think that’s what would happen if you lived forever. You would just say “You know what? I’m gonna be a virtuoso violinist tomorrow. I’m gonna learn that tomorrow. I’ve got the time, what’s the hurry?” Whereas having a deadline in the real world means – if you’re doing it right – you cram things in. Especially as you get older, you start going “Oh, shit, I’m running out of time! I’ve gotta learn Greek now!” [laughing]

Yeah, they’re awfully immature for people who’ve been around for centuries.

I think vampires always feel the age that they were bitten, and they don’t really progress further than that. They don’t get any wiser. Deacon is still just a young rebel, Vlad still talks about torturing. He’s so hung up on the old days.

Did you look to any reference points within the horror world? Novels, movies, any specific vampire lore?

Our influences, I guess, were the films we grew up with. I mean, I didn’t take any influence from films like Twilight … I mean, it’s questionable if the stories are actually good, but they just don’t look good.

There’s a kind of flatness to them.

Yeah, all the effects look really cheap as well. I feel like they obviously cut corners on these films it’s just sad, as a filmmaker, to see people making these things just to go “Oh, make ‘em cheap. Teenagers are dumb, they don’t know the difference.” But I think teenagers do. Like, they can kinda tell. Even though they fall over themselves for the Twilight films, it’s sort of giving them the impression that it’s okay to cut corners with the effects and the visual style. So their aesthetic is now this flat, cheap shit – and that’s the standard. Whereas when we grew up, it didn’t matter what horror movie it was, they’d just put everything into the effects. You know, An American Werewolf In London, the effects are still incredible to look at. And The Thing, the effects in that are still amazing. Those are the things we grew up with, and we had budget restrictions, but we wanted to put as much into it as we could to make it look believable and pull people into the world.

Which brings me to the question of how one makes an improvisational comedy while working with fairly elaborate visual effects, which have to be planned carefully in advance.

That stuff did take time, and we had to plan out as much as we could, because we were rushing the whole time. A lot of the flying stuff was just us basically saying “Eh, lift us up in the air and we’ll see what happens.” We couldn’t go, “Oh, we’ll run around the walls” – it was just too complicated for our small set. We were just like, “Go up in the air, hiss at each other and then we’ll go down.” A lot of it was that simple. And other things, we choreographed – the chase through the house, we choreographed that. We didn’t storyboard it, but we made sure we knew what was going to happen. But everything the characters say is all improvised. That stuff, as fun as it was to look at, and fun as it was to be lifted in the air now and then, it was just really frustrating in terms of time. We were just running out of time the entire time.

Was there a learning curve for mockumentary? Did you have to adjust your expectations on the set? In addition to the improvisation, What We Do In The Shadows has a really different aesthetic from your previous features, Eagle Vs. Shark and Boy.

Oh, totally. And my other films were shot on film, and usually with my own projects I would take care to make sure it looked cinematic. But this one doesn’t look very cinematic.

Often I was just worried that it was going to look like TV I’m actually pleased it looks more cinematic than I thought it would. We borrowed some Red cameras off Peter Jackson to shoot the thing – he has like 60 of them – and most of the time we were like, “This looks too good. It looks like a movie it looks like someone faking a documentary.” Or “Why would you shoot a documentary with Red cameras? Those things are huge.” A lot of the time we were trying to degrade the image, make it look shitty.

You sort of set that up by starting with a scratchy old New Zealand Documentary Board logo, which also lets the audience in on the joke immediately.

Yeah, we never want to be smarter than the audience, because I think it’s really rude. And it’s not as fun. It’s better when the audience is there with you and you’re all in on the joke. You all get the reason why you’re laughing, you know? The kind of films that do that are my favourite. They make you feel like you’re smart for getting it.

For me, one of the big ones was This Is Spinal Tap. I just liked the way it was shot. Because it was shot on 16mm, and it looks great but they really embrace the documentary thing. Like, it looks really real. They did it really well.

And all of the characters are complex, with specific personalities and desires, which is kind of similar to what you’ve done here. Even the jerk vampires have distinct points of view.

It’s a balancing act as well, because Jemaine’s character and Johnny’s character are both so acerbic and very hard to love. You enjoy watching them, but if all of the vampires were like that, it’d be very hard to connect. You need sensitive people like Stu and Viago to kind of keep you in the world, to keep you going “Okay, there’s something worth holding on to and worth caring about.” And even though it’s a ridiculous film about vampires in a flat together, you’ve still gotta have that heart. You’ve still gotta show humanity. Because no matter what, people just like a good love story, or they just like a good feel-good story, or they want a happy ending. And it’s sort of your job to give it to them, to make them not go away. It’s gotta be satisfying.