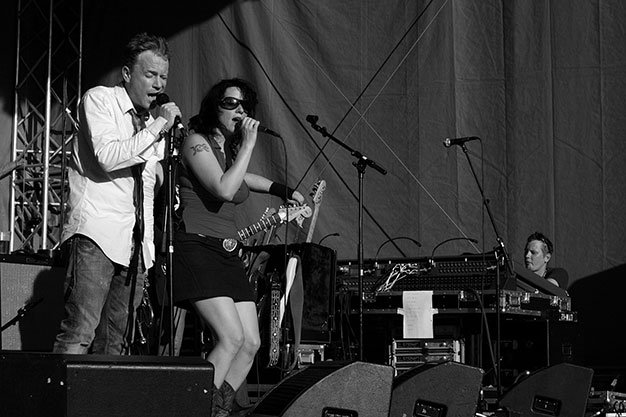 The nucleus of Stars has always been the dual male/female perspective singers Torquil Campbell and Amy Millan bring to the band – as the primary lyricists and frontpersons for the group, the pair’s distinct yet complementary spirits come together to create Stars’ trademark dramatic, romantic vibe. (Fun fact: both were actors in their youth, perhaps no surprise to anyone who’s seen them emote onstage.)

That symmetry’s often evident in conversation with the two – even though our interviews with the pair took place while Millan was at home in Montreal and Campbell on a visit to Calgary, both offered near-identical responses to certain questions, or completely opposite answers to others.

Any chat with Stars is always a fascinating one, and yields far more quotable material than is possible to run in print. So here’s more from Millan and Campbell on making music in the modern era, from the joys of parenthood to the songwriting process to the pleasures and perils of social media.

Q: Both of you have young daughters and have brought your respective kids on tour – has parenthood changed the way you make music in any way?

Millan: Not really, except for the touring part – a lot of our friends are doing it now, like The Dears… We took Delphine all over Europe, to the most amazing museums and such, and when she got home and was asked at school what she’d done while away, she said: “I got a blister.” (laughs) We’re just a bunch of hippies in a caravan – except we dress better.

Campbell: It’s affected who I am profoundly as a human, but we don’t really make diary music. The act of making art is an attempt to connect, and act outwards, and self-reflection is not a big priority for me in art – I want to make things that are beautiful, and I want to make things that make people reflect on their own lives, but it’s not a form of therapy for me. I’m not saying that it shouldn’t be I think there’s great art that is that, and I think there are great artists who make art that way – I’m just not one of them. [Parenthood] is a motivator because you have to pay the bills, so you’re willing to work harder, and you’re willing to make tougher choices, because that money has to be coming in every month. But in terms of the actual art I’m making, I’m not going to be writing a song about the joys of fatherhood any time soon, because I just don’t think I have a great pop song about it in me.

Q: After 15 years, Stars seems to have honed a signature sound and yet each album still sounds distinct from the last – do you go into each new record trying to push yourselves in a different direction?

Millan: I think that when we finished The North, there was something really great about ending our show with Hold On When You Get Love, with everyone jumping up and down and having a great time. So we focused on how we could get out and play live and have a lot of very upbeat songs and really harness that energy. It’s always about coming off the last record, from where we were, towards where we’re going – I mean, for the next record we’ve been talking about trying to find a run-down castle in Ireland and recording on all acoustic instruments. (laughs) It’s like seeing the light differently – like when you look through a camera lens in a certain way, where you’re seeing the same thing, but the focus is different. For us, it’s always about finding the melody that’s going to connect, but how to position it so that it’s different than something we’ve tried before.

Campbell: I think we’re always looking to push ourselves in the same direction – we’re just getting better in moving in that direction. The guys in this band are virtuosic musicians – they’re not limited in what they can or can’t play they can play pretty much anything. But our mission has always been to write perfect pop songs. And we don’t really apply a patina of paste upon that – we follow the song.  Being in Stars means writing songs about you – we write songs for other people. We write kitchen-sink music. We want you to take it, and use it, and make it your own. And once that contract is fulfilled, once you’ve got it and are listening to it, it’s yours. We don’t want to apply some kind of context in which you have to listen to it – the context is your own.

Q: Even after 15 years, Stars never really seem to get the same kind of recognition many other similar indie acts have – why do you think that is?

Millan: Eh, that’s the kind of thing that bothers Campbell, and I don’t give a shit about. This record has our highest hits on Spotify and Rdio, and it wasn’t even nominated for a Juno. But look, we’re selling out theatres across the country. We played a show in Amsterdam, where there was an 8-year-old girl in the front losing her mind the whole show. And then in Bologna, we had this 80-year-old man pumping up the entire crowd – we run the gamut from eight to 80! I just try to focus on writing the best songs, because if you do that, everything else will fall into place.

Campbell: I don’t really know why it is – I can’t honestly say it’s because I think we’re not good enough. I think we are good enough, and I think we deserve a lot more credit from the industry, and the press, than we have ever received. I think it has something to do with our messy humanity – I think we’re a hard story to tell, and I think that rock journalists have a lot invested in feeling cool. Liking Stars doesn’t make you feel cool – it makes you like Stars. And I think there’s something about our so-called theatricality, and our obvious desire to connect, that rubs journalists the wrong way. So I think we end up being kind of dismissed in a way that’s unfortunate. Stars have done more than their fair share of the heavy lifting in Canada for the last 15 years – we’ve gone abroad, we’ve worked our asses off, we’ve put out good records, and we’ve stayed true to who we are. And I think we deserve some credit from the industry for that. But we’re not gonna get it – so what are you gonna do?

Q: Torquil’s known for being a bit of a pop provocateur on Twitter – what’s your approach to social media in this day and age where artists can use it as a promotional tool but also as a way to express your own ideas?

Millan: I vacillate wildly on that – sometimes I feel like it’s all just an addictive nothingness… I think for me, the most interesting thing about being on Twitter is that you get so much news before the news cycle even picks it up. Ferguson, Egypt – these are the things where we’re getting the updates second-by-second – that to me is the exciting part, not some people talking about what they’re having for lunch.

Campbell:  As far as I understood it, the idea is that if you’re in a band, you make pop records, you drink too much, you tour around in buses, and you stay stupid shit. I’m not a philosopher, I’m not a political scientist – I’m a dickhead in a band. And I like to annoy and provoke people. And it’s part of my job. If you want nuanced psycho-commentary on the world’s events, I would go read a John Ralston Saul book! If you’re in the world of pop, part of your responsibility is to say things that incite, excite, inspire… And nothing I say should be taken seriously by anyone, ever. As far as Twitter goes, I’ve sort of made a deal with myself for as long as Stephen Harper is in government. Should he lose, I’ll take a break, but if I don’t have the ability to regularly tell him that he’s an egg-shaped sociopath, I’m gonna die of a coronary, because I go into such rage spirals that I have to let it out somehow.

Q: So much of Stars’ appeal has to do with the musical and personal bond between you two. What would you say you appreciate about each other after all this time being in the band together?

Millan: Campbell gives everything he’s got every single night he’s on stage – to be able to work with an artist like that every night is a gift that I don’t take for granted anymore. I think there were times when he would step on my toes, or he’d get frustrated by something I was doing, and we worked through that shit. At the end of the day, I need him up there – if we’re having a hard night with the audience, all we have is each other onstage, and we need to know we can rely on each other. I know that I can look at him and he’s going to deliver for me. So it makes me a better artist.

Campbell: The conversation we’ve had over 15 years, and the trust that we’ve built up between each other, and the ability we have to make silent decisions together about how to tell the story each night is one of the greatest gifts I’ve ever fucking received in my life. She’s just so gifted, and she’s so willing to be there with people – I think that’s what I learned most from Amy: to look at those people and feel their energy and find out what they need from you in that moment. She’s taught me an incredible amount about being an artist. She’s my sister, and she drives me fucking crazy. Not half as crazy as I drive her, she would guaranteed say that. (laughs)