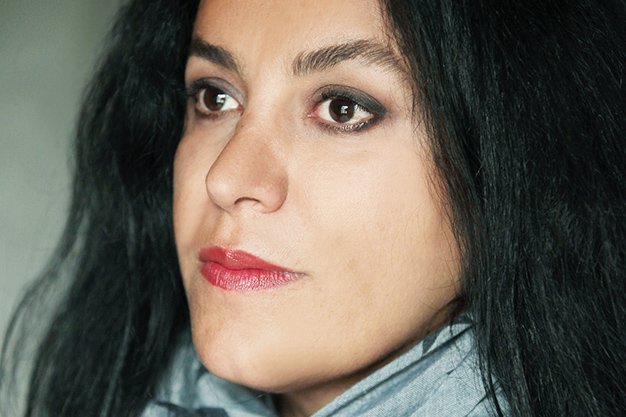 Iranian-born, France-based filmmaker Marjane Satrapi made her name with the autobiographical graphic novel Persepolis, which she then turned into an Oscar-nominated animated feature. And now she’s made her English-language debut with The Voices, which had its Canadian premiere at TIFF. During the festival, we have eight minutes to talk.

This is problematic since The Voices is an insanely complicated movie. Ryan Reynolds stars as Jerry, a well-meaning toilet-factory employee whose quest for love and understanding is complicated by rotten luck and a cat named Mr. Whiskers that keeps telling him to murder people. (Jerry’s dog, Bosco, is much more of a pacifist.)

With the clock ticking, we leap into conversation.

Michael R. Perry’s script obviously gives you a sense of what Jerry’s world should look and sound like, but the film is realized in such a weird, specific way. Did you always imagine The Voices looking like this?

I always knew it, because that is the way I choose my scripts: I read something and I see the film in front of me. But between what I see and when the film comes out, you have to work, you know? It’s not that you really know everything in detail, but basically you have an idea of what you want. A very vague idea, but still an idea. And then you have to have good people to work with – like Udo Kramer, a great production designer. This is the second film we have done together, and hopefully I will make all of my films with him, because he’s great. So it’s really about that you work, you work, you work and suddenly the thing takes place and you see it.

Someone once told me that the best, strangest movies are the result of everyone involved pulling in precisely the same direction, and knowing exactly how hard to pull. Does that sound right to you?

Yes, absolutely. That’s why you have to work only with people you love. Because making a film is so difficult. You have so many things that happen, you have a [set] amount of time to make the film, everything has to work. But one day someone is sick – you know, you’re working with human beings, not machines, so you are not actually in control of everything. So it must be that we all go in the same direction, and you have to choose the people that you work with. I have the same editor for all the films I have made, my production designer is the same – I work with my team, because it makes everything go smoothly. They know what I want.

When it came to casting, was it hard to imagine Ryan Reynolds as Jerry?

No! Ryan had read the script, I think even before me, and I had a call saying, “Ryan wants to do it.” So I came to New York for, like, three hours and met him, and he was the guy. You know, you can have great actors, but the fact is, the actor and the director, they have to want to make the same film. He saw the same film that I saw, so from the beginning the relationship between us was great. And then he arrived [on the set] and everything just exploded beyond belief. He was remarkable.

He is, really. It’s a fantastic performance, especially since he’s spent the last few years doing movies that don’t really let him stretch.

You know, Ryan Reynolds is a Ferrari and people use him as if he were a bike. He’s a Ferrari: he can go from zero kilometres per hour to 400. The spectrum is large. He’s tall and handsome and beautiful, but he’s more smart than he’s beautiful, more talented than his beautiful figure. The problem is that people are like, “Oh, he’s so good-looking!” But he has so much more than his good-lookingness. He’s just incredible – I mean, besides his talent as an actor, he’s a great human being. I don’t become friends with everybody I shoot with, but he’s a friend.

You’ve also got Gemma Arterton doing a really complex performance as Jerry’s love interest, Fiona. She has to be sexualized because that’s the way he sees her, but she’s somehow complicit in her exploitation. At the same time, she can project these little hints that she isn’t as into him as he is into her.

Yeah, I had a very good cast.

The Voices is a very different project from Persepolis or Chicken With Plums. Did you encounter any resistance while putting it together?

Well, until now, I have to say – not to sound arrogant – that when I really like an actor, normally they like me. And when I don’t like them, they don’t like me either. So I always get the actors I want. I remember one time I had to meet an actor because the producer wanted me to, and I really didn’t want to – I really disliked her. And I could see the dislike in her eyes, too. We were never going to work together.

Which is just as well, I guess.

You know, I have to fall in love with the people I work with. The procedure of making a film is so complicated, it asks so much. Even with loving them, it’s difficult. If you don’t like them, it’s hell.