Landlords turn away desperate smaller retailers, using a convenient tax rebate on vacant space to hold out for brand-name tenants 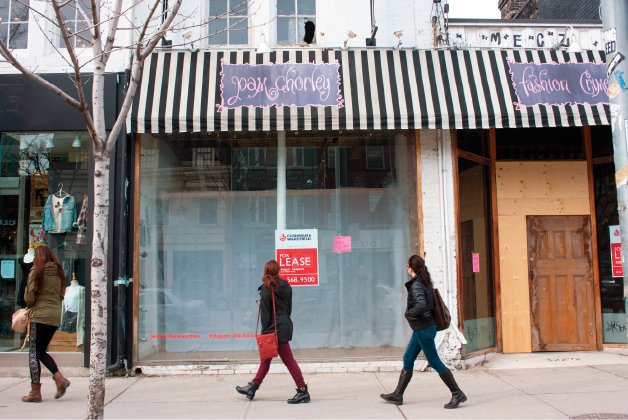 Toronto’s indie retailers are dropping like flies. At least once a week for the last few months, an e-mail lands in my inbox with notice of another store closure.

Some shops, like Fashion Crimes, Klaxon Howl and Theodore 1922, have been lucky enough to set up again in more affordable locations. Others, like Magic Pony, Jacflash and Preloved have shuttered stores in favour of e-commerce. Others still, like GreenShag and Perry’s, have folded for good.

Affordable retail space is hard to come by, especially on gentrified strips like Queen West, where it’s now the norm for tenants to pay upwards of $10,000 a month for street-level retail space.

Such high rates are almost impossible for small retailers to pay, but some landlords aren’t angling for them – they’re waiting for the bigger guns with bigger wallets to swoop in. Queen West, which was once a hotbed of opportunity for hip indie retailers is quickly becoming the land of big-box stores and $10 dresses.

“I don’t know what is going to become of Queen West, but it will definitely not be the place where independent boutiques open up shops any more,” Preloved owner Julia Grieve tells me over the phone.

Oddly, in the midst of all these closures, vacant storefronts abound on Queen West. (I casually counted upwards of 10 between University and Strachan on my daily streetcar commute.) The pattern is repeated along Harbord and Bloor West. Some of these spaces have been empty for months, if not years, but desperate retailers who call the numbers on For Lease signs aren’t having much luck.

Asking prices are too high, the spaces are derelict, with no plans for improvement, and property managers seem generally uninterested in negotiating, let alone renting.

“If Toronto were going through a recession or a brain drain, it would make sense. But Toronto is supposedly growing,” says Theodore 1922 owner Miranda Black, who decided to move when the rent for her Bloor West store spiked from $7,600 a month to more than $11,000.

One space she visited in the search for a new location had no heating another was a former restaurant with mouldy food splattered across the floor.

“The space cost $10,000 a month, and mice were running the place. When I asked the property manager what would be done to clean it up, he just told me it comes as is,” recounts Black.

The stores that do stick around find new locations by word of mouth and inside connections. This is how both Chorley and Black found their most recent properties. Good spaces with fair landlords seldom make it to market.

But what about all those empty spaces sitting on supposedly hot real estate? Why aren’t landlords eager to rent them out?

Black vents her frustration: “It doesn’t make sense. I’m a successful retailer who can guarantee that I’ll pay my rent, so why are these landlords not motivated to get me in there?”

Some are waiting for H&M or Joe Fresh to fill their pockets by signing long-term leases that pay them five figures a month, few questions asked. Others are real estate speculators greedily waiting for prices to skyrocket further.

“There certainly are landlords who do that, ” says real estate broker Coldwell Banker Real Estate Group’s Alex Edminson, who specializes in the sale and leasing of flagship retail properties in Toronto. “From a financial perspective, it makes sense.”

Edminson is careful to add that not all landlords engage in these sorts of practices, and that there are still many who favour local retailers. “It’s a mix, and different parts of Queen West are more amenable to international tenants than others.”

While the landlords who do decide to roll the dice wait, they can take advantage of Ontario’s convenient tax rebate for vacant commercial spaces.

Landlords with commercial spaces that remain vacant for 90 days can receive a 30 per cent rebate on their property taxes – essentially enough to knock the commercial tax rate back to the residential rate.

That rebate has come under fire in both Hamilton and Ottawa for stifling economic revitalization and subsidizing deadbeat landlords. Ottawa’s finance committee passed a motion last year to lobby Queen’s Park to cap rebates to three years maximum.

Opposition to the rebate has been much quieter in the Toronto political sphere, although Councillor Mike Layton made a motion to “redesign the commercial tax relief program as a strategic incentive to stimulate economic development” back in 2012.

As it stands, the city receives no benefit from the tax break. Layton suggested tweaking it so that instead of providing an incentive for speculation it would motivate landlords to offer vacant spaces to small businesses and not-for-profits in exchange for the rebate.

“The problem is there’s only so much that we can actually do about it, because it falls under provincial purview,” says Layton.

His motion was referred to the Economic Development Committee, which, two years later, has yet to return any findings. Lack of traction among Layton’s peers at City Hall means change isn’t likely any time soon.

For now, Layton encourages consumers to take support for local retailers into their own hands: “Rather than jumping in a car and driving to Costco, walk to your neighbourhood shop.”

If there are any left, that is.