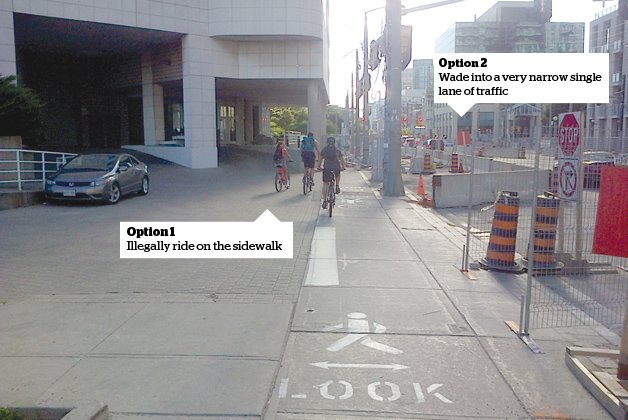 Let’s try a thought experiment: Queens Quay West from Spadina to Bay is closed off – to cars – until March 2014. Or it’s not entirely closed off, you just have to get out of your car and walk beside it most of the way.

This is pretty much the situation on Queens Quay for the next eight months if you substitute riders for drivers. Going east from Spadina, there is no bike lane, and cyclists have the choice of walking their vehicles, illegally riding on the sidewalk or wading into a very narrow single lane of traffic where they have to wedge their bikes between the bumpers of two cars.

Queens Quay is just another example of how cyclists are expected to obey the same road laws as cars but get lesser treatment. This, after all, is a major bike commuter pathway as well as a tourist/weekender one, but shutting it down for an extended period is considered no big deal.

True, you can take the detour that runs along the old Martin Goodman Trail on Lake Shore, but the trail ends before the construction does, so you still have several blocks on the congested sidewalk if you don’t want to take your chances in a car-bumper sandwich.

The bigger problem, however, is that most people don’t seem to know the detour is even there.

I spent last Saturday hanging out just east of the first detour sign and stopped several cyclists walking their bikes to ask if they’d noticed it. Most said they hadn’t. The only person who saw it also said she didn’t understand where it was telling her to go.

Perhaps not coincidentally, east of Spadina there’s an artist’s rendition of what the waterfront will look like once construction is finished. The Martin Goodman Trail will be extended all along Queens Quay, and in the drawing a very fit woman on roller blades cruises by completely unassailed by cars or pedestrians.

“It’s going to be fantastic, not just for cyclists, but for everyone,” Daniel Egan, manager of Cycling and Infrastructure at City Hall, tells me.

Egan acknowledges that it’s not an ideal situation for anyone right now. He tells me construction is moving east every few months and “it’s impossible to maintain bike lanes in those conditions.” He also notes that the construction would take much longer if the lanes were retained.

“Nothing prevents cyclists from riding on the road,” he adds (aside from the instinctual will to live), and he doesn’t see any problem with the detour signage. “It’s clear if you want to see it.”

Perhaps I take this situation a bit more personally than most. I grew up on Queens Quay just west of Bathurst and live there still. For many years, the stretch to Spadina was essentially a vacant lot: no streetcar tracks, bike lanes or Music Garden.

I’ve waited a long time for these good additions to the neighbourhood. They showed up, of course, at around the same time all the condos did. Personally, I wouldn’t mind the construction taking twice as long if it meant we could keep bike lanes operating.