NOW MagazineNewsQuidditch for muggles, pranking Gore Vidal and a Pump Up the Volume 2?

Quidditch for muggles, pranking Gore Vidal and a Pump Up the Volume 2?

Highlights from this year's Fan Expo 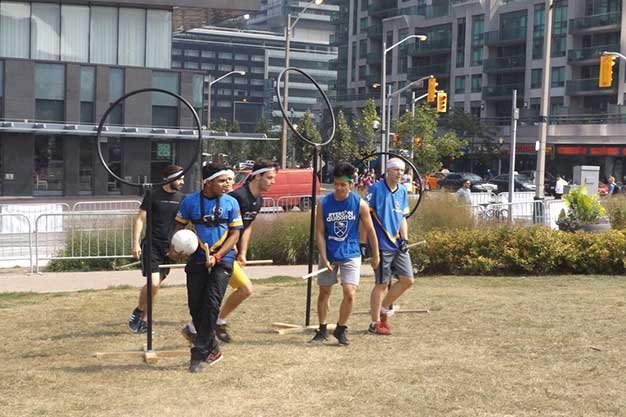 Fan Expo felt smaller this year, but made just as big an impact as previous years. Here, the highlights:

The good ol’ quidditch game,  it’s the best game you can name

With Harry Potter’s Rupert Grint, (Ron Weasley) Tom Felton (Draco Malfoy) and the Phelps twins (Fred and George Weasley) in attendance this year, what better way to open Fan Expo than with a game of quidditch – a sport that made its way from fiction to real life at Vermont’s Middlebury College before spreading to Canada in 2009?

Quidditch Canada brought Ryerson Quidditch and Valhalla Quidditch together for an exhibition match on Thursday.

“You may be familiar with quidditch from the Harry Potter books and movies, but ours is a little bit different – mainly, we can’t fly,” said Clare Hutchinson, Quidditch Canada spokesperson.

However, teams do play the entire game with broomsticks between their legs. Plus, even though chasers still score through upright hoops, (10 points) beaters still try to hit chasers with bludgers, (dodge balls) and seekers still go after the golden snitch, (ending the game with 30 points) the snitch is not a small ball with wings, but a person with a gold shirt wearing a tennis ball that the seeker must grab.

“It’s full contact, it’s mixed gender and it’s the most fun you can ever have,” said Hutchinson.

That’s unless you were playing for Ryerson University. The boys and girls in blue were blown out 130 to 40 by Valhalla – a community rec team – during last Thursday’s exhibition match.

Malcolm McDowell was cast in Caligula by screenplay writer Gore Vidal. At the time, Vidal was embroiled in a longstanding feud with fellow writer Truman Capote.

As McDowell was preparing to leave for Rome to start shooting, he got a call from Vidal, who was already there, to see if he would pick up his laundry from The Connaught Hotel.

“I’m thinking, ‘I’m leaving my house, putting my dog in a kennel for nine months and this guy’s calling for me to go into the centre of London to pick up his fucking laundry,’” McDowell told his Fan Expo audience. “I went, ‘Sure Gore. Okay, no problem, will do.’ And then, of course, I forgot completely about it.”

The next day, he said he was sitting in a limo with Gore Vidal, who had come to meet him at the Rome airport. Vidal asked about the laundry. He responded:

“Gore, thank you for asking. Yes, I went to The Connaught Hotel. I went up to the concierge and I said, ‘Excuse me, I’ve come to pick up the laundry of the greatest living American writer.’ The guy said, ‘Oh yes, that’s right. I have this parcel here somewhere. Here we are. There you are sir, thank you very much.’ I tipped him a five pound note, I grabbed hold of the paper parcel that was done up with string, I got into a cab, went back to my house and, as I was coming into my street, I looked down and it was the laundry of Truman Capote.”

Vidal was perplexed, McDowell said. They sat in traffic for another 40 minutes, got to the hotel, and just as McDowell was getting his luggage out of the back of the car, Vidal exclaimed, “That was a good one!” 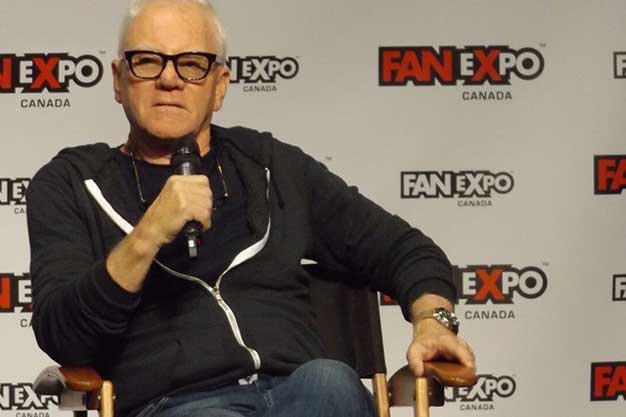 Before Christian Slater played the mysterious Mr. Robot on the eponymous hit anti-establishment hacker drama, he played a younger version of the character, Hard Harry, in the 1990 teen flick Pump Up The Volume.

“Mr. Robot is like Hard Harry squared,” said Slater following an advance screening of episode two, which is set to air on Showcase this Friday.

In the movie, Mark Hunter, aka. Hard Harry, is a loner who founded his own pirate radio station in his parents’ basement. He was fsociety before there was fsociety – and was a heavy influence on Mr. Robot creator Sam Esmail.

“I’ve had my opportunities to play my fair share of anarchists,” Slater told fans at Fan Expo. “Sam Esmail talked about it and he’s talked about Pump Up the Volume.”

So it was only fitting that right in the middle of the panel Q&A, moderator Jonathan Dekel brought up a text message he received that day from Canadian Pump Up the Volume director Allan Moyle asking Slater if he’d be willing to play Hard Harry again.

“I love that character. If he were to write a great script about what happened to Mark Hunter, of course I would do it,” confirmed Slater.

So could there be a Pump Up the Volume sequel in our future? 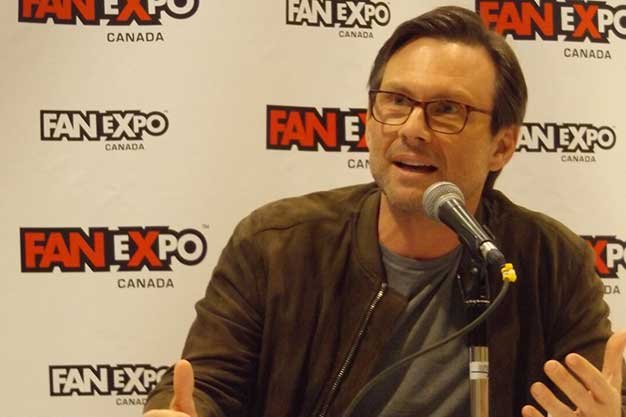 Christian Slater doesn’t not agree to be in a Pump Up the Volume sequel.