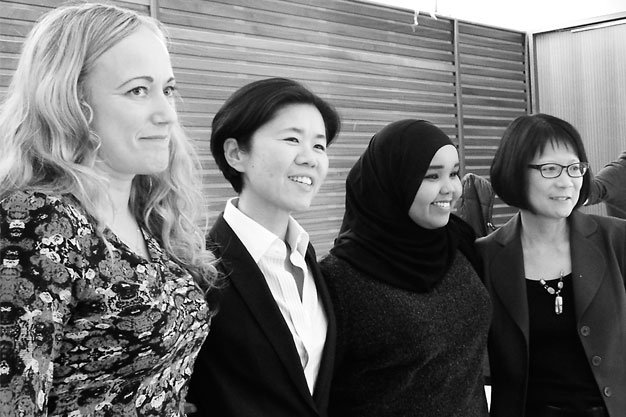 “I received a new death threat,” Councillor Kristyn Wong-Tam tells the crowd with the calm weariness of one who receives many death threats. It happened when one of her canvassers was knocking on doors in a “very prominent neighbourhood” she represents.

According to her campaign volunteer, not only did the constituent say that Wong-Tam “should go back to her own country” but that “if I had a gun I’d put a bullet through her head.”

That was the kind of municipal election it was.

At U of T’s Koffler House on Monday night, January 19, Wong-Tam, former mayoral candidate Olivia Chow and former council candidate Munira Abukar reflected on their recent encounters with bigotry and on what Torontonians might do to better counter such hate in the future.

Hosted by the university’s Centre for Community Partnerships and moderated by the Maytree Foundation’s Alejandra Bravo (herself a former candidate), the event’s title assertively reframed the issue: We Belong! Equity, Diversity And Inclusion In Toronto’s Municipal Election.

Though at least some of the 200-strong crowd may have been there for the “FREE FOOD!” advertised on the poster, the event felt like the latest stage in a gradual civic reckoning.

The Rob Ford years were traumatic in more ways than we’ve yet understood. They were exhausting, embarrassing, wacky and filled with terrible policy, but they also exposed our social fabric as alarmingly tenuous.

“I have often seen Toronto as a progressive place, and it certainly did startle me to see how quickly the civility and the politeness of our Canadian society, of our Toronto heritage, unravelled because of one person who opened the doors of hatred and bigotry for everybody else to step through,” Wong-Tam says to the room. “And I don’t feel that we had a proper response in 2014.”

For most of his term as mayor, the mainstream media and much of the public tended to dismiss Ford’s racism, homophobia and misogyny (and that of some of his supporters) – or at least were reluctant to call it what it was. The social systems that were supposed to identify and confront hatred were too timid or polite to do so.

“We become complacent from time to time,” explains Chow, “and sometimes we think these racist statements or homophobic statements… ‘Eh, you know, they’re small, little things and they’re just a small minority, a small group.’ But when it comes from people that have the power, then it gives other people the licence to hate.”

The day before the election, the Sun published a racist caricature of a dwarfish, slanty-eyed Chow wearing a Mao suit, literally riding the coattails of her late husband, NDP leader Jack Layton. Later in the week, the paper defended cartoonist Andy Donato’s drawing as being not racist at all, and issued a textbook non-apology to Chow and “anyone else offended” by their own interpretation.

“I didn’t feel that there was a big community response,” Chow laments, seemingly hurt by the limited reaction.

Wong-Tam echoes the theme of abandonment. She says she regularly receives hateful messages, but even after she went public about an especially vicious anti-gay letter in September, the response from the expected quarters was muted.

“I don’t believe that our community, in this case the LGBT community, rallied around the issues of homophobia the way we should have and could have, which to me is disappointing,” says the councillor for Ward 27 (Toronto Centre-Rosedale).

She reasons that parts of the community had relegated their rights struggles to the past and were caught off guard by Ford, failing to grasp the extent to which his attitudes would reverberate through the larger population.

“It seemed that it was just one person, so we just let him go. He’s the clown in the room. But that one person did a lot of damage to our community.” In the 2010 election, Wong-Tam’s sexual identity was not a factor four years later, it was.

Abukar, who ran against Ford for councillor in Ward 2 (Etobicoke North) and whose volunteers were berated as “terrorists” by a passing truck driver, is similarly critical of that type of privileged complacency but had fewer illusions going into the campaign.

“A lot of people want to say, ‘Well, this isn’t my Toronto. This doesn’t happen downtown. Starbucks is right around the corner, and I see my one black friend every day,'” she jokes.

“You need to unpack this and have a genuine conversation about it.”

Chow and Wong-Tam hold up the Ausma Malik situation as a model for community response. Malik, the newly elected Toronto District School Board trustee for Trinity-Spadina, was subjected to escalating racist and Islamophobic attacks through the final weeks of the campaign.

Malik couldn’t participate in the panel, having been called to an emergency TDSB meeting, but sent a statement about the “coordinated, well-funded barrage of hate, lies and innuendo” she faced.

She overcame it, she wrote, “with the tremendous support of my community of Trinity-Spadina: from residents associations, parents, teachers and activists who took to the neighbourhoods and spoke out, who came and canvassed with me, who donated.”

Chow, who used to represent the area as its councillor and then MP, credits the social infrastructure in place there.

“There’s already institutions and structures where the kids went to school together, where they understood what racism or hate or Islamophobia, all of that was. And they knew that they had to come out and be very clear, and not just to speak about it but also act.”

On the afternoon of election day, October 27, a pair of men took up posts at the northwest corner of Bloor and Palmerston. One of them hoisted a trio of signs.

“Anyone but Chow & Malik,” read the third.

A video shot by the other protester and posted to LiveLeak shows seven minutes of his arguing with passersby who took issue with the nature of the demonstration.

“Leave our community! You’re not wanted,” demanded a cyclist who stopped.

“It’s not wanted,” said the cyclist. “There’s nothing to join here except hate.”

Wong-Tam wishes the sort of support received by Malik had been reflected in her corner of the city, also seen as a “bastion of downtown pinko elitism.”

“We’re okay, right?” she asks, sending up the area’s self-image.

“And yet we were not okay. We were very far from being okay.”

#1 Rally against complacency. If your community’s candidate is under attack, get behind him/her.

#3 Build the social infrastructure so that communities are already organized and able to respond.

#5 Hold media to account. Mainstream news outlets have a responsibility to pay attention to discrimination and investigate it.