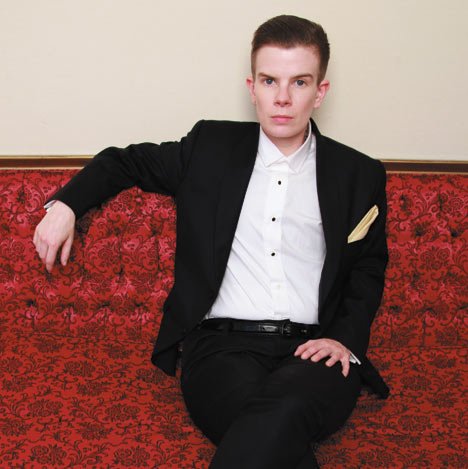 You could say that Rae Spoon’s year began with a battle.

In reaction to Xtra’s refusal to refer to transgendered comic artist Elisha Lim as Lim’s preferred “they” in an article and because Xtra editor Danny Glenwright used trans woman Lexi Sanfino’s legal name on his Facebook page, Spoon wrote a lengthy, personal, articulate Tumblr post entitled Instead Of An Interview With Xtra.

The Montreal-based transgendered electronic pop maker, who also prefers the plural pronoun, even gave up a cover on Capital Xtra after Xtra refused to issue an apology.

“I recognize that the pronoun thing is a challenge, especially grammatically,” says Spoon over sparkling water at the Gladstone. “That’s why I didn’t come out till now. I don’t hate being called he’ but I do prefer they.’ Also, after years of fighting to be called he,’ the idea of coming out again made me tired.

“But now I feel kind of rejuvenated, ready to fight on some more. I think the they’ pronoun is a pretty cool thing. It’s letting a lot of people not have to identify as a man or a woman. Whatever it means to them.”

Spoon speaks fast and laughs easily, and grows animated when we move on to the main topic at hand: their impressive new album, I Can’t Keep All Of Our Secrets (Saved By Radio). It’s a moving work propelled by Spoon’s high, endearing voice, affecting melodies and icy programmed beats and synths.

Written for a friend who died five years ago, it’s anchored by grief’s myriad shades yet never becomes heavy or dramatic. That Spoon has only recently processed the loss is something they credit partially to their gruelling tour schedule, which has included up to 250 shows a year.

“On the road, you don’t have room to feel all your feelings all the time. And when something terrible or dramatic happens, I don’t think that in the moment a person can afford to totally connect with it. You just get these tiny pieces of it sandwiched by not feeling anything at all.

“I’ve never done an album that’s so honest about its sources. I also wrote a book of short stories about growing up in Alberta” – out via Arsenal Pulp Press this fall – “so I guess I’m in a confessional period. But I hope anyone hearing the songs will find something in them. When you’re making art, it’s yours while you’re making it, and then when you’re done it’s not any more. So I’m done. I’ve had my time with it.”

And about Kate Bush being an inspiration.