NOW MagazineNewsRage against Ghomeshi outcome can be channelled into great things

Rage against Ghomeshi outcome can be channelled into great things 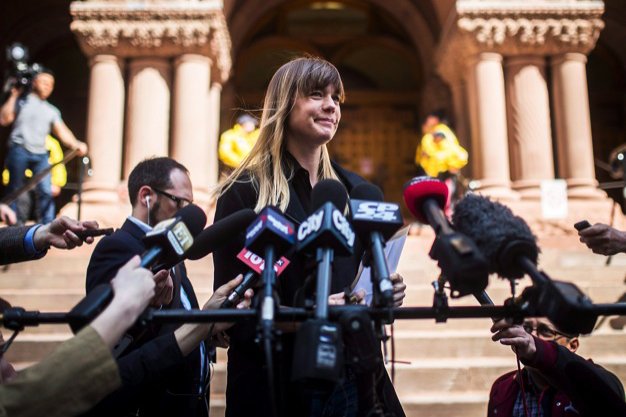 I love Kathryn Borel, the woman who talked back to Jian Ghomeshi’s prattling apology last week as he walked free from accusations of sexual assault and harassment by more than 20 women. That last fact is easy to forget since only three went to trial.

But in a few short paragraphs in a statement read on the courthouse steps, Borel did what the police, lawyers, Crown attorneys and judges refused to do, what a court of law will not do: she held Ghomeshi publicly accountable for his actions.

She also told us that forgoing a sexual assault trial was, for her, the closest path to the truth and that undergoing one would have subjected her to further abuse.

Folks across the country rose to cheer her. I sure did.

The sad-sack spectacle of Ghomeshi and his trials came to a close, at least for now. The spectre of civil suits looms for Ghomeshi despite his acquittals on criminal charges, as do lawsuits he might file.

While civil law is heralded for its kinder, gentler nature, let’s be clear on one thing: when sexual assault is the issue, the law is always an ass.

In a civil trial, the sexual, medical, social media and other histories of the female identified persons involved are admissible as evidence and subject to even more public scrutiny, shaming and stigma than in a criminal trial.

Oh, a woman will have her own lawyer and all, but rape mythology remains the key mindset for courtroom practitioners, civil or not. The process will also cost her a shitload of money and may take years, decades even, to complete. If she wins, the financial rewards are small – although her lawyers will clean up.

And just as with criminal courts, civil ones have no power to order change. They’re all about the money awarded for damages.

Another thing that should not be forgotten as legal and media pundits gallop to “better” legal remedies for sexual violence is that peace bonds like the one applied to Ghomeshi (Section 810s in legal parlance) are pitiful pieces of judicial paper.

In hundreds of well-documented cases, peace bonds were a factor in the escalation of sexual and domestic violence, often resulting in the murder of women by men they knew. It’s something that workers in the anti-violence sector have always known.

While it’s safe to say Jian Ghomeshi will keep the peace with respect to Kathryn Borel, a 2015 Department of Justice research paper titled Peace Bonds And Violence Against Women has a different take on 810s.

Most participants in that study, including a Nova Scotia justice of the peace, argued that peace bonds are useless against persons who have a history of abusing their partners.

Peace bonds work for people who are otherwise lawful. They might stop petty nuisances, but they’re not going to stop a major crime. So before we embrace them, let’s all slow down and contemplate the risks of such “new” legal remedies for sexually assaulted women post-Ghomeshi.

If we are truly committed to change (which I question), let’s do it by taking the advice of experts in the field and their allies, who recognize the cock-ups of the Rape Shield Law, No Means No and other consent legislation.

Progressive at the time and in intent, they have made a scant difference in the abysmally low conviction rate and ultimately play into the financial and other state benefits of law-and-order agendas.

I am gobsmacked that in all the reactions to Ghomeshi we still assert that sexual assault law works or can be fixed. Decades of legal, academic and community based feminist research that decry those claims can move us forward and are at our disposal.

Black, Indigenous, racialized, trans and gender-non-conforming and other youths practise art and smarts, joy, rage and resistance to identify misogyny, racism, poverty and the consequences of global warming in our systems. Sex workers, migrant workers, immigrant, disabled and LGBTQ communities have also developed creative responses to violence. Artists have done it for centuries. Shifting the way we respond to sexual assault, approaching it through art, can let us “in” on a subject from which we usually run screaming.

Starting next month, for example, renowned artist Lillian Allen and I are taking our project Sexual Assault: The Roadshow on the road for three years to places across the province.

At each stop, local artists will work with local anti-violence agencies and community participants to create, curate and exhibit art that talks back to sexual assault.

On Friday (May 20), at Innis Town Hall in Toronto, Grammy Award-winning artist Mýa will sing for female- and male-identified people who have experienced sexual violence.

On Monday (May 23), the Comedy Bar presents Rape Is Real And Everywhere: A National Comedy Tour, fresh from sold-out performances in Vancouver. And there’s more.

Events like these can transform, educate and uplift us. Check one out or plan your own.

And dear Kathryn Borel: if you are reading this, this shift is for you, it’s for Linda Redgrave and Lucy DeCoutere and all the other women who named Ghomeshi as their abuser. It’s for Mandi Gray, whose trial resumes (yet again) on May 24 at Old City Hall. It’s for all the women whose names we know or do not, who report or do not. It’s for all the Jane Does.

Jane Doe is a sexual assault author, educator and activist. Read more of her coverage of the Ghomeshi trial here.