Just in time for Pride! 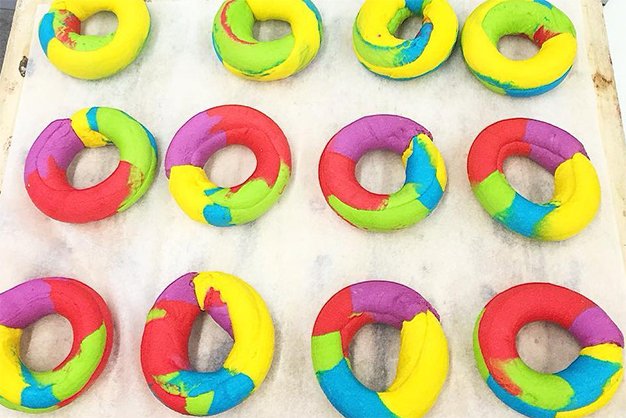 When rainbow bagels, a psychedelic breakfast treat created two decades ago by Brooklyn’s Bagel Store, went viral this past winter, the Internet had two collective thoughts: “That looks like Play-Doh” and “I kind of want to eat it anyway”.

The bagels, which come with a schmear of birthday cake-flavoured cream cheese, soon inspired lengthy lineups the likes of which New York had not seen since the Cronut (or every damn day at Shake Shack). Naturally, as is our wont with trendy food items, we Torontonians immediately began counting down the days until these delightfully unnatural little morsels would be available here.

Looks like that day has finally arrived (though not before they landed in the other bagel capital of the world, Montreal, at Dizz’s Bagel). The rainbow bagel has officially made its Toronto debut at What-A-Bagel, who have begun selling the treat at their 8010 Bathurst location at just 70 cents a pop (or $6 for a dozen).

Staff also say the 4884 Dufferin (at Steeles) and 7117 Bathurst (at Steeles) locations may soon carry them as well. Downtowners, looks like you’ll have to come up north for these – but hey, it’s better than a flight to New York.