Sit down, you’re rankin’ the vote 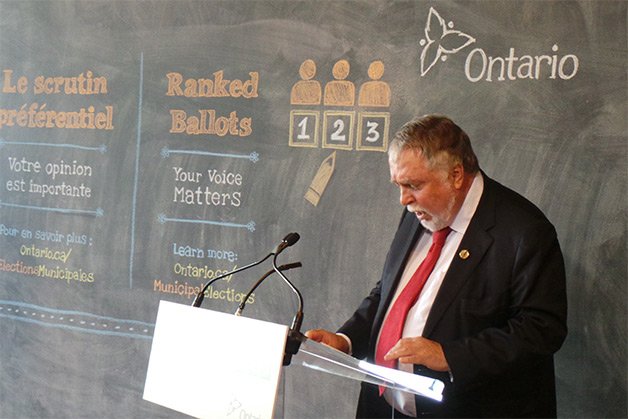 We can't think of the minister without crooning "Ted McMeekin in the free world" to ourselves.

“Thank you all for coming,” Ted McMeekin said. “I feel like Mr. Rogers.” The hyper-avuncular Minister of Municipal Affairs and Housing proceeded to sing — with surprising assurance — several bars of Won’t You Be My Neighbor?

“My kids grew up with that,” he explained. “Whenever I start the day I always sing that, just to kind of get in the mood for it.

“So today I am pleased to formally launch a review of the Municipal Elections Act.”

It was surely the cheeriest air with which anyone had ever uttered those words. But he had legitimately good news to share, and the MPP for Ancaster-Dundas-Flamborough-Westdale (it’s a real riding, look it up) was proud of that fact.

The provincial government plans to give every municipality in Ontario the option of using ranked ballots beginning with the 2018 civic elections – marking the culmination of eight years of advocacy by the groups Better Ballots, RaBIT and Unlock Democracy Canada, all founded by Dave Meslin.

Ranked ballots allow voters to rank candidates in order of preference. The first-choice votes are added up, and if no candidate gets more than 50 per cent, the last-place candidate drops off and their votes are distributed according to second-choice preferences. This is repeated until a candidate earns a majority.

If you find it confusing, the ministry has drawn a helpful graphic: 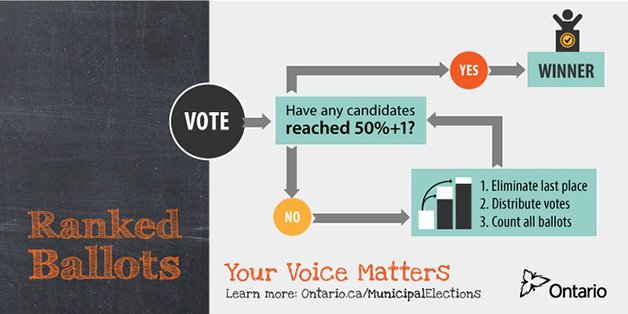 Ministry of Municipal Affairs and Housing

Without mentioning her by name, McMeekin cited the case of Christin Carmichael Greb, who was elected to council’s Ward 16 Eglinton-Lawrence seat with just 17 per cent of the vote last October.

“That should raise some flags, methinks. … A ranked ballot would have afforded the winning candidate a much higher percentage of the vote and a broader mandate.”

Ranked ballots could also make a dent in the privilege of incumbency and pave the way for municipal bodies that better reflect the diverse populations they represent.

And they would, in theory, lead to more civil elections. McMeekin, who’d run in four municipal and five provincial races, said he’d “had the feeling that sometimes people were running just to get that 23% of the vote that would put them over the top and they’d do anything they had to do to do that.” Because candidates in ranked-ballot elections are trying to earn the respect of their opponents’ supporters, there’s more incentive to play nice.

Under the amended Municipal Elections Act (MEA), a council would be able to switch to a ranked-ballot system simply by passing a resolution to do so. Further details have yet to be worked out.

The review of the MEA will also look at regulations concerning other aspects of civic elections: physical accessibility, third-party advertising, campaign financing, and how the rules are enforced. The latter two areas, especially, are in pressing need of updates and reforms.

We’ll explore them in depth at some later time, but for now Ontarians are invited to submit suggestions and comments through the links above until July 27.