Rap leads the way on day two of WayHome 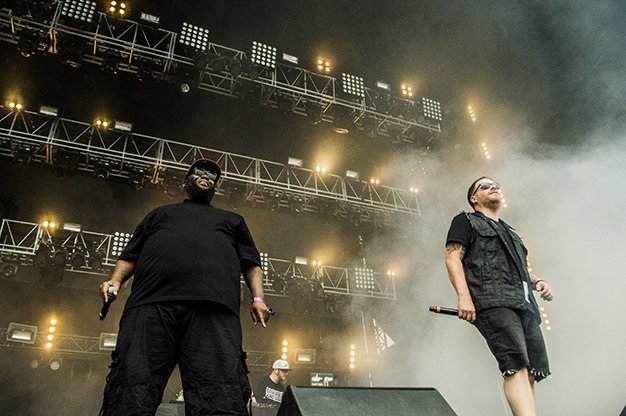 The UK has mastered the mega music and camping festival, where stacked, non-stop programming has you running from stage to stage first thing in the morning and till all hours of the night. But the leisurely mornings at WayHome are just what my summer ordered. Gates don’t open till noon, with the first band going on around 1 pm, leaving you to lounge, find food and file a report before the music gets underway. (Sleeping in isn’t as possible, with 10 am soundchecks blasting from PAs.)

Like Courtney Barnett the afternoon before, Toronto-based Alvvays got the day started right by sending out dreamy indie pop, boppy enough to keep beach balls flying, shoegazey enough to add sonic weight and melancholy enough to give you that so-sad-it-feels-good vibe. Playing mostly songs from their acclaimed self-titled debut (plus a similarly upbeat new one at the end), with few alterations from the recorded versions, Molly Rankin and Co. swayed and sang, paying little mind to the large numbers of surfer boys amid the massive crowd, singing at the top of their lungs and shouting “Marry me, Molly!” between songs.

It’s been easy to catch part of every act playing on each of the four stages, but Saturday’s late-afternoon programming made for the weekend’s toughest decisions. Check out Run the Jewels on the main stage (and how could you not when their walk-on song was Queen’s We Are The Champions, and when they ordered everyone to put away their selfie sticks, prescription sunglasses and phones because they were about to “Fuck your fucking shit up!”)? Or run to the other side of the field to see synth-heavy dance rockers Django Django (I did, and it wasn’t worth it)? See what squeaky-voiced weirdo rapper Danny Brown was up to on the mid-sized stage (in a nutshell: smokin’ and drinkin’, drinkin’ and smokin’)? Or maybe get in some T.O. love for the Highest Order, whose live shows have been fewer and farther between lately?

I did a little of all of the above, and the Highest Order were the most satisfying, out in the secluded WayAway woods tent, the Simone Schmidt-led five-piece wearing shades and leather pants and dishing out wah-wah-pedal-boosted psych country that sounded utterly delicious.

While Modest Mouse played Dramamine and other hits new and old over on the main stage, shortly after Broken Social Scene were filling in for a cancelled Passion Pit on the WayBright stage, and METZ were giving ‘er big time on the smallest one, WayAway, getting the fest’s first mosh pit going and generally threatening to burst neck veins and eardrums, as they do, white and red lights flashing in the descending darkness. But the fest waited for Kendrick Lamar’s 9:45 pm set before busting out the biggest light show, a far, er, flashier show than Neil Young’s the night before. (No one wants Young’s tunes set to strobes, after all.)

A sea of humanity spread out in all directions as the Compton rapper took to the stage, dressed in head-to-toe black and appearing confident but humbled by the massive crowd. The set was epic, vital, enhanced by a live band and full of love despite Lamar’s lyrics having grown increasingly more focused on and frustrated about social injustices, especially when it comes to black lives. That made for somewhat of a disconnect Lamar doesn’t really make party music, and this was a party crowd. It was also a hugely white crowd, dancing and spinning and seeming largely oblivious to Lamar’s impassioned lyrics.

Which isn’t to say it wasn’t fun, nor that hardcore fans weren’t also on hand. The set focused on material from To Pimp A Butterfly, which Lamar made no bones about wanting to win a Grammy for. But we also got plenty from his breakthrough good Kid, m.A.A.d city album (m.A.A.d City was particularly powerful), and even Section.80’s ADHD. He played late into the night, well past the 11 pm scheduled stop time, taking moments to express gratitude to fans who got onside at the start of his career, to ask us to wave lights in the air a cheesy move that’s still effective every time and pausing for a moment of silence near the end before bringing the energy back up with i (“I love myself!”) and the searing King Kunta, about the rebel slave.

But it’ll be awesome to see him play for a hip-hop crowd when he eventually makes his way to Toronto.

And for those still looking to party, the Growlers over on the woodsy stage offered up jubilant but slightly off-puttingly creepy garage rock, and then Bassnectar took things home with insanely bassy dubstep for the costumed, super-young revellers. Definitely time to call it a night.