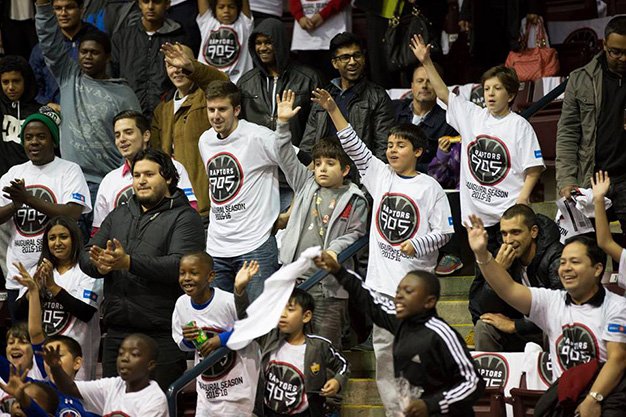 When the Toronto Raptors picked 20-year-old Brazilian Bruno Caboclo in the first round of the 2014 draft, ESPN analyst Fran Fraschilla summed up the basketball world’s surprise when he said that the player was “two years away from being two years away.” For what feels like forever, professional basketball in Canada has had the same relationship with its big brother to the south – always several leaps from the big time. Yet this position is changing for both Caboclo and Canada, and they’re changing it together at Mississauga’s Hershey Centre, where the newly minted Raptors 905 team calls home.

The Raptors 905 (a questionable name, but with our recent Drake-birthed obsession over area codes, perhaps it fits) play in the D-League, which is essentially the AHL of basketball – a place for prospects to get some minutes while they develop their skills. Caboclo, in fact, was one of the driving forces behind the 905’s creation for this very reason relegated to mop-up duty on his first D-League team, the top prospect required an environment with guaranteed playing time for improvement, which only an MLSE-owned franchise could provide.

The 19th and most recent team to join the league, the 905s will battle for a playoff spot and host an All-Star Game  this winter, just like the big boys at the ACC, only with understandably less fanfare. Their status as eternal understudies, however, has not stopped GTA hoopheads from checking out the product.

“Going to the game is a great experience,” reports Mikaela Berza, a Mississauga native and former Ryerson assistant coach who watched the the Delaware 87ers beat the Raptors 905 last month (125-109) in a battle of seemingly random numbers. “MLSE does a great job of making the fans feel involved, and really rewarding them for their presence. The arena is a good size for the team – there’s an NCAA feel to it. It’s important that we as fans get behind the team, since everyone has to do their part to build an experience here.”

Caboclo is honing his craft in the 905, but he’s not alone. Delon Wright, the Raptors’ 2015 first-rounder, was recently assigned to the team Lucas Nogueira, another Brazilian prospect, was promoted to the big leagues a few weeks ago, and is enjoying newfound levels of success. Yet it’s the Canadian content that stokes the fires of interest for many in attendance.

Sim Bhullar, a Brampton native who became the first player of Indian descent to appear in an NBA game late last season, currently anchors the middle of the team’s defense, a mountain of a man at 7’5″. Nick Wiggins, older brother of rising superstar Andrew (a #1 overall NBA selection and first Canadian to win the league’s Rookie of the Year award) is another GTA product featured on the squad.

In all, four Canadians have spots on the 905’s permanent roster, giving locals the opportunity to watch high-level Canadian ballers play in their home nation, a spectacle nearly impossible to behold before the team’s creation. One considers the possibility of the next Andrew Wiggins, Tristan Thompson, or Kayla Alexander (GTA natives all) watching from the stands, inspired by a team that their predecessors never got to see.

The unique circumstance isn’t lost on the 905 community, some 6000 of which turned out for the team’s home opener on November 17 (average D-League attendance two seasons ago was under 3000 the Los Angeles D-Fenders averaged a measly 385). In attendance was a contingent of TFC supporters, a group going by the name Inebriatti (you can probably guess the root word), who led the crowd in all manner of futbol-style cheers and jeers.

While hockey is undoubtedly the bedrock of our national sporting consciousness, there’s no arguing against the simplicity and global popularity of basketball, qualities that dovetail with certain demographics who may not be so crazy about sprinting around on ice.

Cost, accessibility, and global role models all factor into the sport’s nationwide explosion hockey is great, but it can be a heck of a hassle, especially in the ultra-competitive GTA where the price of playing isn’t always realistic for many families. Another ingredient that cannot be ignored: the rise of the big-league Raptors as a contender. Outgoing MLSE president Tim Leiweke, after observing the throng of rabid fans in Maple Leaf Square during the Raps’ 2014 playoff appearance, opined that “It takes you about one second to figure out where all this is going.”

He’s right – it’s all going up, going big, and the 905s are yet another crucial building block in the nation’s hoops ascension.

Get more info on Raptors 905 here.