Rob Ford, Drake's lint-roller, the people of Toronto – the dinos weren't the only ones with something on the line last night 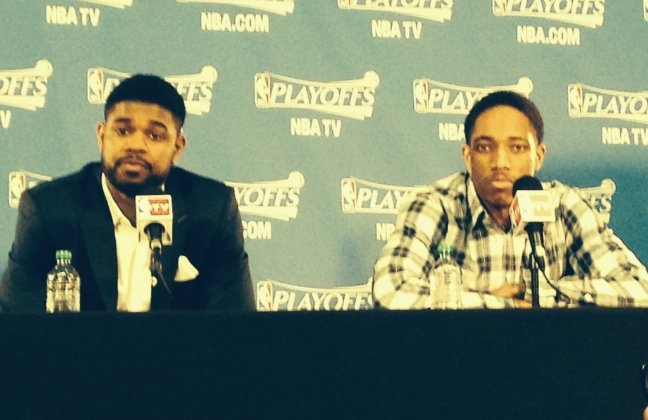 The Raptors scored a 100-95 victory over the Brooklyn Nets last night, evening their best-of-seven series to one game apiece. But they weren’t the only champs in the house. Here, a rundown of the winners (and losers) from Tuesday night at the ACC (and beyond).

DeRozan must have been pissed after being pretty much neutralized in game 1, because he was highly motivated to lay down an ass-whooping in game 2. After going a dismal 3 for 13 on Saturday, Toronto’s captain and star shooting guard reminded the ACC why he was a first-time all-star this year. Scoring 30 points – 17 crucial ones in the fourth quarter alone – DeRozan was in fine offensive form.

“It’s everything you dream about,” DeRozan said after the game. “Having that trust from you coaching staff and your teammates to have the ball in your hand and win the game for them, that’s big and I appreciate all 14 guys in that locker room and the coaching staff that have trust in me to take those shots in the fourth quarter.”

Upon leaving the ACC, I peeped DeRozan with his baby daughter and fiancée, who attended the game in matching black-and-white sneakers and red-and-white outfits. Officially the coolest NBA family.

The ACC gave up most of their colourful chants for game 2, but stuck with “KG Sucks! KG Sucks!” And while, admittedly, Kevin Garnett seemed a bit rattled at times, it was Paul Pierce who stunk it up most for the Nets, going 2 for 11 and missing two key, key shots down the stretch.

We deserved this one, Toronna. Our playoff woes are well-known, but we really came out for our Raptors in game 1. And I’ve never heard the ACC louder than it was in the dying minutes of game 2. Maple Leaf Square, was, once again, packed with spectators. (And then there’s the multitude of throwback jerseys, Raptors caps and We The North swag you can see sauntering around town these days.) Ready to get choked up? Check the scene outside the ACC last night.

Ask Rob Ford, and he’ll probably tell you that he was at the ACC with 18,000 of his friends. Sadly, no. Donning a long-sleeved red Raptors shirt – in contrast to the rest of the white-tee clad ACC – Ford was seated in the upper bowl of the arena, and, quite honestly, except for an appearance on the jumbotron, nobody really cared. To an egomaniac like Ford, that’s tantamount to disaster. If Rob Ford was in the stands, but nobody gave a shit, did it really happen?

We have Drake’s uncle to thank for a lot of things (see verse 2 of Look What You’ve Done, as well as The Winner and Too Much for other uncle references). Namely, lending Drake his car, encouraging Drake’s talent, loaning Drake money etc, etc. Turns out uncle Steve was right about Drake. Now he’s sitting courtside at Raptors games. Not bad. And while we love seeing a fam jam in the first row. When’s Drizzy gonna bring Rihanna?

Drake of all people should know that the cameras are always watching. So his sneaky attempt to lint-roll – yes, lint-roll – his pants mid-game was an interesting move. Especially since he was facing press-row. And especially since just three nights ago when asked about Jay-Z, Drake snarkily replied that he was “somewhere eating a fondue plate.”

Almost instantly gifs were created, the lint-roller got her own twitter account, and the insert-lint-roller-into-Drake-lyrics jokes began.

We appreciate a man who cares about his appearance, but lint-rolling is something that should be done before you leave the penthouse, Drake. Burning question: where did the lint-roller come from?