A BRIMFUL OF ASHA by Ravi and Asha Jain. Presented by Why Not Theatre and Soulpepper at the Young Centre. 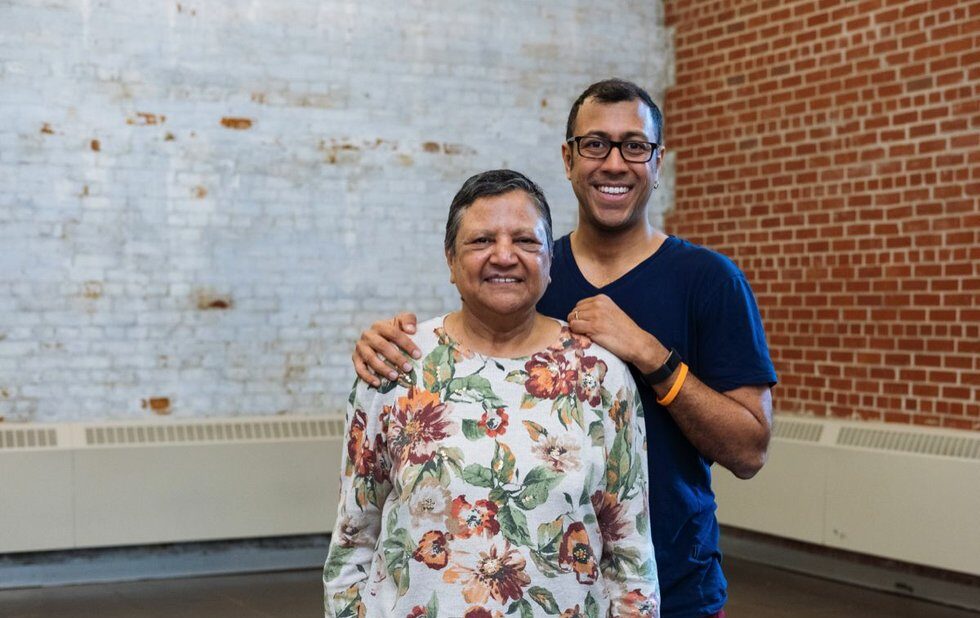 Does working with your mom sound like a dream job or workplace hell?

Soon, Asha and Ravi Jain are taking the stage for their count em 350th performance together.

Thats amazing enough, but its even more remarkable considering that the unlikely mother-son partnership behind their autobiographical world-touring hit, A Brimful Of Asha, began with a dinner-table argument and a challenge.

I was back in Toronto, living with my parents and working on a solo show about how they had tried to arrange my marriage, recalls Ravi Jain over the phone. I came home one day and told my mom, Im making this show and Im going to tell the world what a bad mother you are.

And she was like, Youre an idiot. If the audience heard my side of the story, they would agree with me and see what a terrible son you are.

And so I said, Okay, would you do that onstage? And she said, Absolutely, no problem.

While its not uncommon, working with a family dynamic in the room requires a different approach than working with friends, acquaintances or hired guns. That special familiarity circumvents normal professional boundaries, makes conflicts that much more personal and raises the overall stakes. Collaborating with real-life family in theatre is a high-risk but also high-reward proposition.

Ravis challenge to Asha resulted in Brimful, a comedy in which they spar over her attempts to meddle in his love life. But critical acclaim, box office success and seemingly endless remounts and tours were never a sure bet. In fact, before Brimful, Asha was a theatre newcomer and had never acted, and other family members worried the idea might totally tank.

My brother warned, Mom, youre going to ruin Ravis career! remembers Ravi. My concern going in was people judging her. She was shy about her accent. She loved to talk and to debate, but never in front of crowds. Brimful has now converted non-actor Asha into a seasoned performer.

This past summer, actor/writer Shari Hollett cast her own real-life teenaged daughter, Lucy Earle, in her family-memoir Fringe hit, For The Record. Unlike the Jains, Hollett and her partner, director Chris Earle, have immersed their children, Sam and Lucy, in theatre since day one.

Chris and I met in the Second City touring company, so our working relationship preceded the couple relationship, and extended to our children as well, says Hollett. When I was seven months pregnant with Sam, we did a Fringe show about pregnancy so he performed in utero! I remember that during the applause he was kicking so hard!

After working with Sam a few times over the years, Shari turned to Lucy for help with a show shed been writing about her own mother.

For Lucy, finally being asked to work alongside her parents (her father directed) was a dream come true.

The first play I went to when I was four years old involved my parents and Sam working together, and it was so weird, says Earle on the phone from Montreal, where shes in her first year of theatre school at Concordia. Seeing these people who were so casual around me up on stage in their own constructed world was fascinating, and a pivotal moment in my life. Looking back now, I was jealous I wasnt up there with them.

For Lucy, who acted in many productions while majoring in drama at Etobicoke School of the Arts, working with Mom and Dad had its awkward moments, too.

I remember at our first read-through, one of the characters I was playing was my moms old boyfriend, and I remember coming up to that scene and thinking, Oh my god, am I going to put on a voice? Am I going to, like, try to pull a move on her? What am I going do here? But then I just did it I lowered my voice, and they laughed, which felt good.

For Shari and Lucy, the key to managing the family dynamic in rehearsals was to enlist non-family member Isabel Mortimer as stage manager.

She was a great mediator and would get us back on track when anything got off topic or became too family-oriented, remembers Earle.

That changed the playing field so it wasnt just the parents working with their child, says Hollett. I never wanted to feel like Id just asked Lucy to unload the dishwasher.

When conflict did arise, Earle says the solution was space.

Conflicts were natural and unavoidable, she says. They happen outside of theatre because were a mom and a daughter, so times when we would argue about her not correcting herself on a line or something we would just take a little space and a couple of breaths away from each other.

The same is true for Ravi and Asha. Working on Brimful required both to negotiate and make concessions. She never wants to get together and run through the play or do a tech or dress rehearsal, says Ravi. She always says, Ill just say whatever comes through my head and thats infuriating. I need to rehearse ad nauseam. So our solution is to get her to watch a video of the play. Thats how we get her to rehearse.

I also recall a moment. I would give her notes, and she would mock me, Oh, the big director is giving me notes. But there was one day when she started giving me notes. She was like, This section takes too long speed it up! My first impulse was to say, Fuck off, you dont know! But I stopped myself and thought, No, if Im expecting her to listen to me, I need to listen to her, and I need to follow her impulses.

For Earle, the experience of exploring her mothers past onstage during her last summer living at home was amazing, but getting there required sometimes tamping down those familial feelings.

You have to remember to listen to your parents because theyre your parents, but now they are also your peers, and you have to be able to listen to them without putting the label of family on top of it, without automatically thinking, Oh, this is coming from my mom.

Hollett agrees. Its not for the faint of heart. No matter what the family dynamic, everyone has to be equal in the rehearsal hall. But, oh my god, its rewarding!

Ravi argues that their real-life relationship translates into a more authentic experience for audiences.

The audience knows were related, and they watch with a different kind of empathy. I feel like capital-C culture has gotten away from the reality of peoples lives.

He says bringing his mother into the theatre fold has been hilarious for audiences, but also elucidating for both of them.

My mom finally gets what I actually do for a living, and the amount of work and time that goes into theatre, he explains. But I also remember sitting in the green room at the Tarragon waiting to perform, and she was bored and said, What the hell, man? What are these people doing here? We should all be at home eating dinner with our families. And I thought, Oh yeah, its weird what actors have to do. We give up so much of our lives.

So have 300-plus nights of debating arranged marriage brought Ravi and Asha together on that issue?