It probably had more to do with collecting an early pension than a falling out with the PM. But the whiff of scandal persists 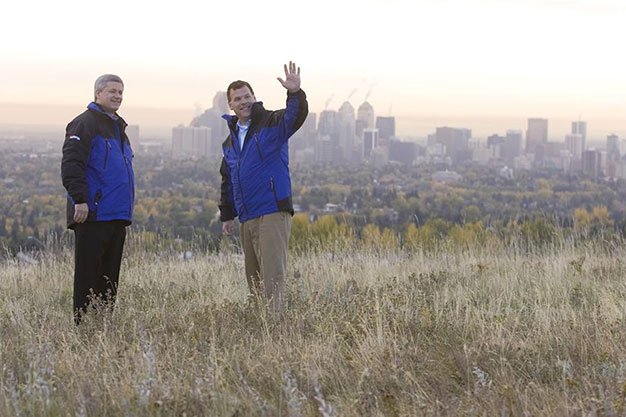 The spin After 20-plus years in politics, 10 of those on Parliament Hill, it was time for a change.

The reality The PM’s office was clearly caught off guard by Baird’s resignation. Harper reportedly heard through media reports of his foreign minister’s impending departure. It was only after news began to leak out Monday night that Baird reportedly sought a meeting with the PM to make his departure official, leaving the PM with no time for a smooth transition of power in a key portfolio on which the PM has staked his political reputation. And so the PM now finds himself in a war in Iraq with an interim foreign affairs minister at the helm. The whiff of possible scandal lingers. And conspiracies abound about Baird’s legendary lifestyle. Was there a falling out with the PM? Or is Baird simply abandoning a sinking ship? There’s some truth to Baird’s claim that he wanted to go out on top. Politically, there isn’t much higher for him to go in Ottawa, even if the HarperCons managed the improbable: another election win.

The spin Baird has a cushy job lined up in the private sector.

The reality More than a few unnamed sources were quoted on this point. But it doesn’t square with the facts. That the resignation happened so abruptly suggests otherwise. The kind of job offers that might flow to someone in Baird’s position as a jet-setting minister tend to be a few months in the making. Although there was some early speculation ofBaird joining the World Health Organization, the most recent reports suggest he had no firm plans save for a more typical soft landing with a directorship or two on Bay Street. The death of longtime friend Jim Flaherty is said to have had an effect on Baird. The minister didn’t want to die with his boots on, is how one Ottawa watcher put it to me. But somewhat overlooked in Baird’s decision is his age – and new pension rules that come into effect after this election. Baird’s 45 and under current rules he can collect his MP pension at 55. Under rules coming into effect after this election, Baird wouldn’t have been able to collect his pension until 65. Just sayin’.

The spin Baird was a good guy who actually made an effort to reach out to MPs on the opposition benches.

The reality Funny, isn’t it, how the old boys network always rally around one of their own when they call it quits, no matter how much of an asshole he is or may have been throughout his career? The narrative making the rounds is that Baird had grown in recent years. That he’d gone from political goon who would do the dirty work whenever he was called upon, to a seasoned political veteran. But don’t be fooled. There was no one more loyal to Harper’s cause than Baird. He was the PM’s designated attack dog and fixer. And he relished every snarling minute of it. Baird is every bit the opportunist he always was. That’s why he’s getting out now while he still can.

The spin No matter his politics, Baird remained true to his values.

The reality Baird started his goodbye speech to the House talking about values. And how government can be “a force for good,” which coming from a staunch Conservative who believes in less government comes off like a crock. Or maybe Baird has had an epiphany sometime over the last few years. What values Baird was talking about is unclear. But it came off as a reference to something personal. Maybe the real reason he’s leaving? Baird couldn’t have been talking about his government’s political values, which were often sacrificed for political convenience.

The spin Under Baird as foreign affairs minister, the stature of Canada has grown on the world stage.

The reality Can it honestly be said that Canada is more revered in the world now than when the HarperCons took over? On the environment, Canada’s big fuck you to climate change and efforts to stem the tide of greenhouse gas emissions came while Baird was environment minister. The HarperCons also pledged never to sell out human rights for the sake of trade deals, and then signed a $2.5 billion trade deal with China when markets started dying out in the US. For all the self-congratulations, the HarperCons have been very selective when it comes to protecting human rights. The feds’ unquestioning support of Israel in the face of worldwide condemnation over military operations in Gaza, is the most obvious example. Now we’re reviled like never before in the Muslim world, with extremists carrying out attacks on our soil for our policies in the Middle East. Then there’s the foreign affairs department’s Washington, D.C.-based Office of Religious Freedom established in 2013 to “speak out to protect and promote religious freedom around the world,” which could muster little more than the customary “concern” over the Saudis’ planned public flogging of human rights activist Raif Badawi last month.

The spin There was a falling out with the PM.

The reality In the predictable stroking that followed his resignation, Baird was commended in particular by political foes for his work promoting gay rights around the globe. Was it a shot at family values Harper? On that file, Baird seemed more often than not to ruffle feathers in the Conservative’s religious base, taking a stand against his own government’s attempts to re-open the same-sex marriage debate in 2006 – he was one of 13 HarperCons to vote against the move. And again in 2013, when he was one of 18 Conservatives to vote for including gender identity as a grounds for discrimination in the Human Rights code. Baird became the target of Harp’s fave feminists, REAL Women, for his condemnation of the treatment of gays in Africa. Although Baird’s stand on gay issues often came off as token to friends in the gay community, within an overwhelmingly socially conservative caucus, they had become a major point of contention. Were these the “values” Baird was talking about? It’s difficult to see how there could have been any falling out with Harper. Baird was not only a loyal foot soldier of the PM. He was a close friend of the PM’s wife, with whom he would often be seen at formal functions about town. It was for that reason that the PM would overlook his minister’s intransigence – and whatever else Baird and six of his friends may have been doing when they were vacationing free of charge at the official residence of the Canada’s High Commissioner in London.