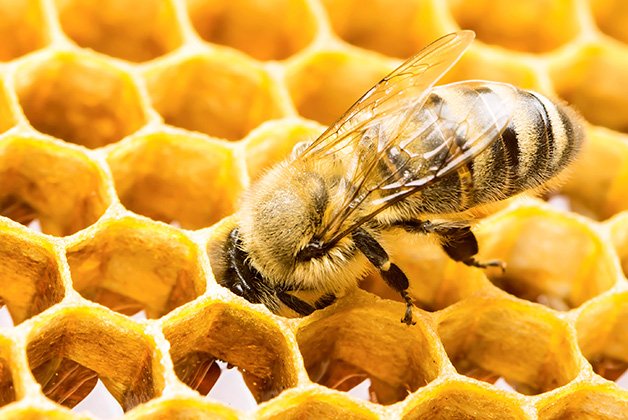 Have you seen those the full-page ads in the daily papers from “28,000 farm families” asking for “support from our fellow Ontarians”? They warn that the province’s pending regulations for neonicotinoid pesticides won’t actually benefit honeybees, but will instead strip farmers of the tools they need to keep feeding us local food, fuel and fibre.

The ad campaign, which is actually funded by CropLife Canada, a lobby group that represents big-name chemical and seed manufacturers facing neonics regulation, offers to help readers get “the facts straight” on honeybees. Thing is, the ads’ claims don’t quite add up when they’re put under the microscope.

THE CLAIM Honeybee colonies are growing (up almost 60 per cent since 2003), not collapsing, and honeybee production is up (by 29 per cent in the last year) across Ontario. The ad cites StatsCan numbers.

THE REALITY Perfect example of a half-truth. If you look at StatsCan figures, it’s clear that on a per colony basis, honey production has taken a nosedive over the last decade, down 40 per cent, in fact, since 2003, when neonics were introduced. Last winter was particularly brutal for Ontario, with 58 per cent of honeybees lost, according to a report by the Canadian Association of Professional Apiculturists. Still, demand for honey is officially on the rise. To keep up with that in the face of weakened hives, beekeepers have been replacing lost bees by importing package bees and splitting hives. It’s costly, but by doing so, Ontario Beekeepers’ Association (OBA) says they’ve been able to increase production despite bee deaths and dwindling hive productivity.

THE CLAIM The number of honeybee “incidents,” or deaths, reported during planting was down 70 per cent from 2014. Implication: neonic-treated seeds can’t be to blame.

THE REALITY That stat comes from a Health Canada report that called its own analysis incomplete. The report did, however, suggest a drop in bee deaths was likely the result of a cold, wet spring that meant corn was planted later, and bees weren’t as exposed to neonics. Also, with 58 per cent of colonies dead that winter, beekeepers say there were fewer bees around to be poisoned come spring. Either way, Ontario’s Ministry of Agriculture, Farming and Rural Affairs (OMAFRA) reported more pesticide poisoning incidents in 2014 over the two years prior.

THE CLAIM Eighty-five per cent of Canadian honey is produced in western Canada, where there are no known honeybee colony health issues related to neonics.

THE REALITY That’s mostly true. Health Canada says the primary problem is honeybee exposure to neonic-treated corn and soy in intense corn-growing regions, namely Ontario, which grows 68 to 70 per cent of all of this country’s corn and soy. If you look at overlapping maps of the soy/corn belt and Ontario bee yards, there are very few areas where beekeepers can place hives to avoid exposure.

THE REALITY Honeybees face a lot of challenges, but a recent global analysis of 800 studies on pesticides found that neonics are not just killing bees outright, but the nerve poisons are also weakening bee immune systems, making it harder for them to survive harsh winters and fight off viruses and parasites. As well, exposure impairs their navigation skills, making getting adequate nutrition tougher. So, yeah, neonics essentially make honeybees’ other challenges way harder to cope with. The OBA say they were able to manage mites, disease and pests for decades, but they’re unable to avoid the neonics used on over 5 million acres of soy and corn in Ontario.

THE CLAIM Ontario’s neonicotinoid regulations will not benefit honeybees.

THE REALITY Nice industry-friendly theory, but Health Canada’s Pesticide Management Regulatory Agency, a pretty conservative body, hasn’t minced words on this issue: “The current use of neonicotinoid-treated corn and soybean seed is not sustainable” – specifically because of its connection to bee deaths. OMAFRA’s own crop specialist has said only 10 to 20 per cent of farmers actually have pests that need neonic control. Accordingly, Ontario plans to restrict neonic use by 80 per cent by 2017 so farmers who could really benefit from neonics will still get ’em, but bees will get a much needed break, as will other pollinators at risk.