How to legally organize a demonstration in Toronto: Reasonable Doubt

Peaceful political protest has long been recognized as a protected form of expression and assembly. 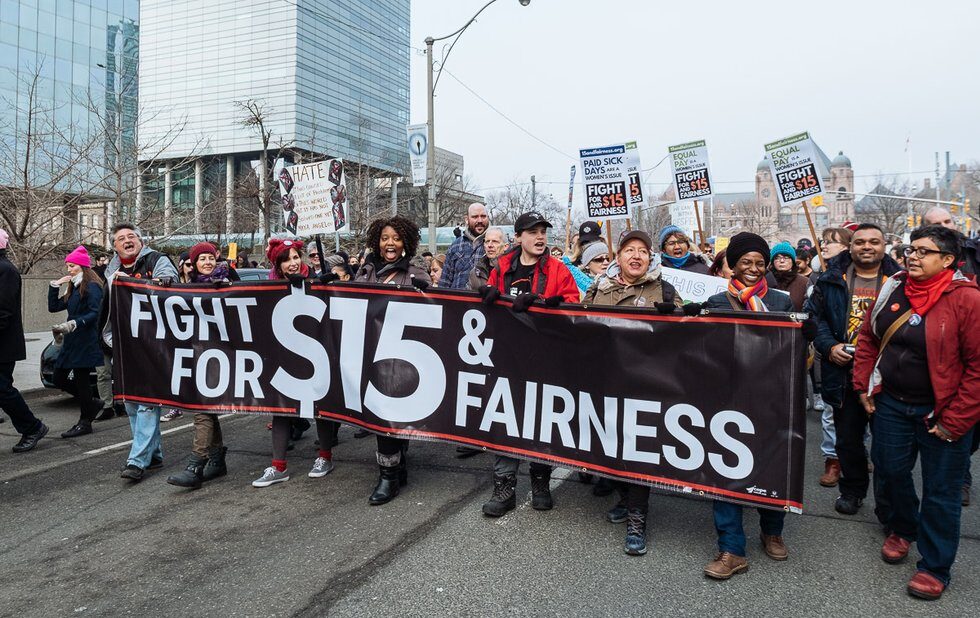 "Gabby" has a suggestion for Trump!|Paige Bishop and Kelly Berberick.|Stephanie

The shock and disappointment of Trump’s election came to a head Saturday when millions of people worldwide took to the streets for the Women’s March. It was an incredible sight to see so many women and their allies marching together all over the world – 60,000 strong in Toronto. There were daughters marching with grandmothers. Grandmothers marching with granddaughters. Young boys holding signs that said, “This is what a feminist looks like.” The march was one of the largest global demonstrations of all time.

In anticipation of four years of peaceful, progressive political organizing, it’s useful to know the bounds of protest in Canada.

The Criminal Code provides a variety of limitations on political protest, all with potentially broad implications. The Code prohibits unlawful assembly, obstructing highways, riots and causing a disturbance. There are also increased penalties for participating in a riot while disguised, such as when wearing a mask.

Municipalities have laws that may also restrict political protest, such as the disruption of traffic or noise bylaws.

2. Everyone has the following fundamental freedoms:

(a) freedom of conscience and religion

(b) freedom of thought, belief, opinion and expression, including freedom of the press and other media of communication

(c) freedom of peaceful assembly and

Peaceful political protest has long been recognized as a protected form of expression and assembly. Peaceful assembly and expression are arguably two of the most important rights in a functioning democracy, contributing to our aspirations for truth, self development and in protecting and fostering a vibrant community.

Charter rights are not absolute, however. Not all expression is legal. Not all assembly or association is legal. A Charter right may be curtailed by the law when it is “demonstrably justified in a democratic society.” The Charter does not protect violent forms of expression or hate speech, for example.

Most major Ontario cities allow you to apply for a permit or give formal notice to the police of a protest. The Toronto Police forms can be found here. Allow a few weeks for the application or notification process.

What if the police ask you questions at a protest? You are free to cooperate fully. Or you can refuse to participate. The choice is yours. The only information you must generally provide to the police is your name and your address otherwise you risk being charged with obstruction. Do not provide false information because that is a separate offence.

If you are worried about the conduct of a police officer or another protester, record the interaction on your cell phone. Cell phone videos are convincing evidence if charges are laid or legal action is taken – much more reliable then eyewitness testimony. Be aware, however, that police may search you or your cell phone after an arrest, without a warrant in some circumstances.

If you are detained or arrested, remain calm and be polite with police. You have the right to remain silent other than giving your name and address. You can also calmly advise the officer that you do not consent to being searched, but keep in mind that the police may legally “frisk” you if you have been detained or complete a full body search if you have been arrested. For more guidance on arrest and detention, see the BCCLA’s handbook here.

The Ontario Court of Appeal certified the G20 class action last spring, meaning it is now headed towards a trial to determine whether the Toronto Police breached Charter rights through mass detentions of protesters – also known as “kettling” – and if so what compensation the detainees will receive. The class action has likely already had a significant impact in modifying exaggerated police behaviour during protests – the risk of paying out millions of dollars in damages will do that. As a result, political protest in Canada has become a little safer.

Most protest marches in Canada are peaceful, safe events. But to take extra precaution, keep these tips in mind: apply for permits or notify the proper authority weeks in advance keep it peaceful be polite and calm with police know your rights and, bring your cell phone.