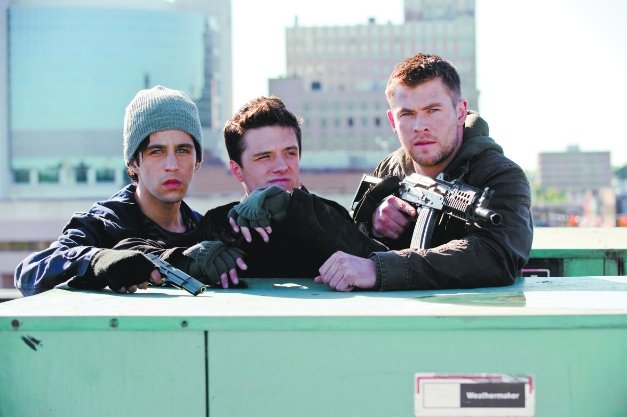 A remake of an anti-Commie, Reagan-era action movie sounds as appealing as thumb wrestling with Chuck Norris. But if you go in with low expectations, you might actually find Red Dawn a decent distraction at times (same goes for thumb wrestling).[briedbreak]

The new film adapts the original’s Cold War anxieties to today’s style of fear-mongering. The U.S. is attacked by the North Korean army for no discernible reason other than giving the U.S. a taste of its own medicine. They occupy the States in a fashion similar to Americans in Iraq, detaining prisoners in a football field set up to look like Guantánamo.

That leaves Chris Hemsworth’s marine and a pack of teens to assume the role of jihadists, mounting a terrorist campaign to defend their homeland. Hemsworth makes the most of hammy dialogue. The action, however, with teens wielding rocket launchers, is a mediocre substitute for playing Call Of Duty.

The movie’s muddled politics are equally fascinating and troubling. Is it a left-wing critique of the war in Iraq, a right-wing celebration of the red states’ eagerness to defend their country or a justification for universal firearm ownership just in case the Koreans do land?

Whatever it is, the NRA will love it.