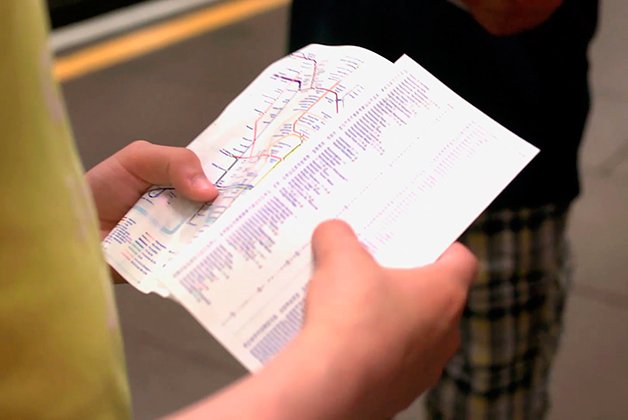 Artists On The Underground shows how a bit of creativity can touch millions of lives.

The Reel Artists Film Festival, put on by the Canadian Art Foundation, wears its lack of popular appeal like a badge of honour. These movies are unlikely to become hits. They’ll probably never be seen again outside of art galleries and museums. But the program offers you the rare opportunity to experience them with the other 150 or so Torontonians who would trek to the Lightbox to see a 90-minute documentary about a very large rock.

That would be Levitated Mass (February 22, 3:15 pm), Doug Pray’s very enjoyable study of artist Michael Heizer’s project to bring a large boulder to the Los Angeles County Museum of Art in the summer of 2012.

Pray’s doc tracks the project from beginning to end, starting with the detonation at a California quarry that split the 308-tonne slab from a rock shelf, and charting the long, complex process of transporting said rock (slowly, carefully and over several nights) to its current home as an exhibit at LACMA. Through it all, a sense of bemusement and goodwill surrounds the project, with Pray suggesting none too subtly that the human ingenuity required to make the thing happen is at least as artful as the thing itself.

There are no large rocks in Artists On The Underground (February 22, 7:30 pm), but lots of trains. Jared Schiller looks at the London Underground’s ongoing project to commission original art for the covers of its pocket Tube maps. A charming look at the way a small flourish of creativity can touch millions of travellers, the 40-minute doc is followed by a panel discussion with the filmmaker, Spacing senior editor Dylan Reid and others.

And while it seems out of place in a Toronto festival, BackBone: Vancouver Experimental Cinema 1967-1981 (February 23, 5 pm) offers a glimpse of key West Coast works, with historical perspective provided by interviews with directors Sturla Gunnarsson and David Rimmer, among others. It’s followed by a panel discussion featuring BackBone director Richard Martin, Gunnarsson and Chris Kennedy, executive director of LIFT, which is sure to be worth your time.