Cineforum has a new champion, and Rob Ford be thy name 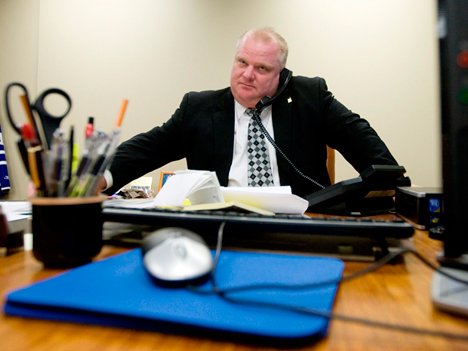 Reg Hartt stands up for his underground cinema. And, apparently, for Rob Ford.

In April 2010, Hartt received a notice of violation from Toronto’s Licensing and Standards division because of his less-than-conventional posters hung up around the city, advertising his living room movie theatre. Cineforum, a unique film theatre on Bathurst, just south of College, was shut down. See NOW’s report on that here.

But now, according to Hartt, Ford’s office has overturned the violation file and Cineforum is back up and running.

Lawyer Richard Zemla told Hartt that a man named Jamie Gillis was the primary reason for the city shutting down Cineforum. After visiting with Gillis, Zemla told Hartt that he had made numerous phone calls and written complaint letters to the Municipal Licensing and Standards to get him shut down. It seems he had succeeded.

“It was just one person making complaints and an office digging way deeper than they had to,” says Hartt.

He doesn’t think Cineforum should ever have been shut down, and once he realized it could be Gillis that was to blame for the whole incident, Hartt took matters into his own hands.

All it took was a call to Ford’s office to unveil the theatre’s curtains once again.

On Tuesday, Hartt got a callback from David Williams of Municipal Licensing and Standards, who informed him the file was closed and Cineforum was free to continue its screenings.

Hartt believes it’s all thanks to the mayor.

He says he always knew Ford was going to win the election and continues to support the win, “Ford is the embodiment of Jane Jacobs and I supported her, she was a friend, she was a fan, and I think Ford is a really good guy and I fully support his office.”

“[Cineforum] falls into a gray area,” says Vaughan. “Hartt doesn’t think he needs to make accommodations. If he is soliciting for money, it becomes a theatre,” he says of issues that may arise from its reopening.

“He is free to show films, but when you are advertising and asking for money, you are crossing the line.”

Contrary to what Hartt has stated on his blog, Vaughan claims there have been many conversations with him regarding his choices with Cineforum.

“I’ve told him, you have to decide if you are running a centre for film enthusiasts to come watch movies or a business, where you ask for money for a service, out of your home,” says Vaughan.

According to Vaughan, discretion is the key for Hartt.

The councilor says he has tried to work out a solution with him, but Hartt doesn’t want to listen. “If he stays off the radar and can get around the rules, then he will be fine. But if he chooses to snub his nose, and chooses to run a business, he is going to run into problems.”

Hartt’s posters were the underlying reason for Cineforum’s close after complaints were filed and the Licensing and Standards office had looked into them last year. Although Cineforum’s file has been closed and in Hartt’s eyes everything is back to the way it was, Vaughan still warns that the posters could lead him to trouble.

“His posters are his worst enemy,” says Vaughan.

Because the posters essentially advertise Cineforum as a for-profit theatre, it comes across that the theatre is a business run from within a home, which raises issues about the home’s capacity, fire hazards and the legality of running a business from home.

“Reg Hartt is a character and Toronto loves and thrives on its characters, but he can’t be an exception to all the rules,” says Vaughan, “I appreciate his folk hero status, to a certain degree.”