For anyone who needs a refresher, Wipeout was a game show seemingly sold on the pitch that face plants are. 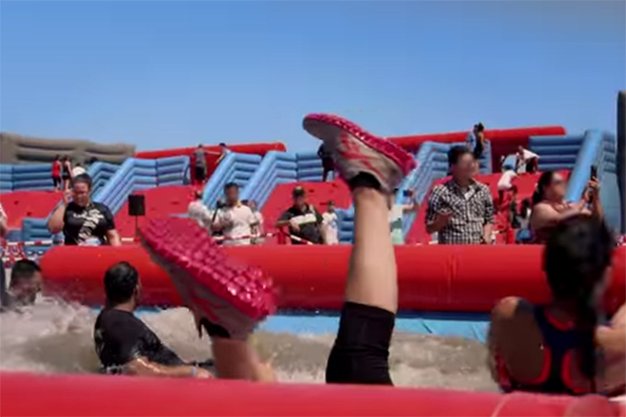 For anyone who needs a refresher, Wipeout was a game show seemingly sold on the pitch that face plants are funny.

Contestants were thrust into an obstacle course of ungainly bouncy orbs, stagnant pools and merciless rubber banisters waiting to take them out at every step. It was Crocodile Mile on steroids. Rarely did anyone ever make it to the end, and the resulting episodes were like one giant blooper reel. It was a massive success.

If you did ever watch the show, then undoubtedly you witnessed endless lines of people failing to make the same jump over and over, and eventually thought, I could probably do that from the hummus nook of your couch. Fortunately for fans of the show and zany converts, the chance to test your luck and see what you look like falling in a slow-mo replay is coming to Toronto in the form of a 5-km race series called WIPEOUT Run.

The WIPEOUT course will mount at the Woodbine Racetrack on September 12. Toronto will be the only Canadian stop on its North American tour, and the only place where maybe, just maybe, incoherent racetrack goers will attempt to bet on you like youre a horse.

Registration for the mammoth event is already underway. If youre looking for a way to start practising, I would suggest stepping on a rake and throwing a water balloon at yourself. Find out more info here: http://wipeoutrun.com/toronto/.