According to the Toronto Sun the troubled mayor is stepping aside 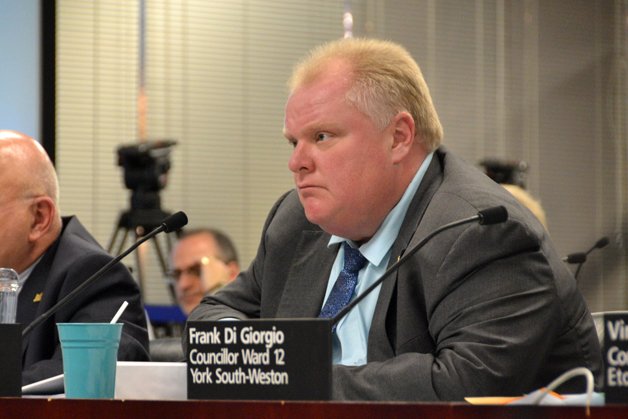 Six months after admitting he smoked crack cocaine in a “drunken stupor,” Mayor Rob Ford is reportedly taking a leave of absence to deal with personal issues.

According to a report in the Toronto Sun, Ford told the paper he is taking temporary leave from both his job and his re-election campaign in order to “deal with his issues.” The move comes after the Sun obtained an audio recording of an apparently inebriated Ford making lewd and bigoted remarks, some of them about mayoral candidate Councillor Karen Stintz in an Etobicoke bar on Monday night. Ford was not seen at his office the following day.

A separate story in the Globe and Mail reports that a second video of the mayor smoking crack has surfaced. According to the paper, the footage was secretly filmed on Saturday morning at the mayor’s sister’s house. The original crack scandal broke last May after three reporters viewed a tape of Ford smoking what appeared to be the drug.

The mayor did not answer his phone Wednesday night and his chief of staff did not immediately return a request for comment.

Ford faced widespread calls to step aside last fall in the wake of his crack confession, but steadfastly refused, denying that he had a substance abuse problem. Council stripped him of many of his powers in November.

The mayor was at City Hall on Wednesday but gave no indication that he intended to take a leave. Instead he spoke with reporters about Scarborough transit plans, and gave a tour of City Hall to a group of visiting school kids. He said he wanted to go this evening’s Toronto Raptors playoff game, but he didn’t have tickets.