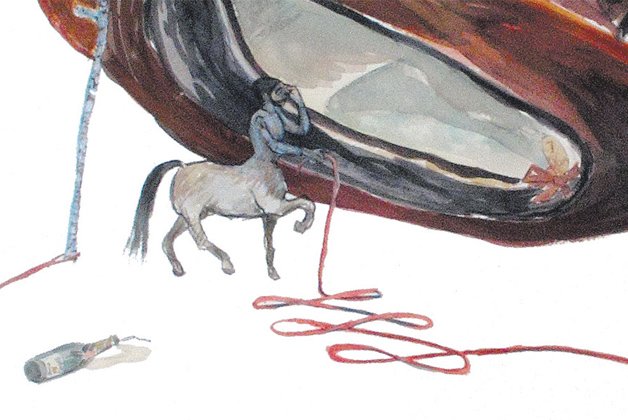 As a student, Eric Farache began making watercolour sketches of cherished and puzzling objects from his boyhood. He began to explore them as touchstones of memory and desire, building associations around his growing menagerie of objects and figures. Over time, these sketches accumulated and grew into the paintings seen in his current show, Quixtopia.

They come across as confessional and cryptic, as if we were reading a subconscious shorthand culled from the male psyche and its discontents. He litters each painting with the fetishes of boyhood fixation and fantasy: mythical creatures, toy action figures and the iconic women of men’s magazines.

Self-deprecating humour softens the chaos. In Night Moves, a centaur, lying in wait under a fedora propped up by a stick attached to a rope he is holding, hopes to catch a woman who has fled the scene, leaving behind a pair of high heels and panties. In pulling it he will only succeed in catching himself, however, a neat parable commenting on quixotic male desire.

In other paintings, his figures often sport Restoration-era costumes, riffing on that era’s grotesque lampooning of human desire and weakness.

Farache’s hand is deft and loose, its figuration suggesting the sketchbook of a naturalist or costume designer.

Figures are casually placed, seemingly jotted down as they’re noticed, with no overarching narrative or theme. But they do seem to speak to each other in unexpected ways and create unlikely wholes out of their many elements.

Restlessness and fragmentation drive these images. We are, Farache seems to be saying, part of what we see and fixate on, and all the fantasies we build around these things are fleeting and mysterious.