NOW MagazineNewsRevenge of the Stintz

Revenge of the Stintz 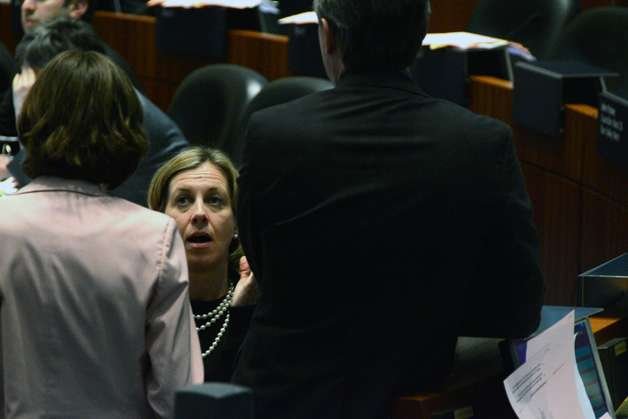 Karen Stintz in headier times - when she actualy believed in LRT and revenue tools to fund transit. Photo by Ben Spurr.

Karen Stintz has been doing a lot of smiling since she entered the race for mayor. It’s been a bit unnerving to watch, frankly – parading the beautiful kids in front of the cameras at her official launch and choosing a sunflower as her campaign logo.

Apparently, sunflowers aren’t just beautiful and a symbol of positivity. They’re “strong and bold and they always face the sun.” At least that’s what she told an audience at the Toronto Region Board of Trade after her launch. They’re a little like Stintz herself, supposedly. Hmm.

Sunflowers also tend to turn to face the direction winds are blowing fairest. In that regard, the sunflower motif fits. Stintz has wavered mightily when it comes to her transit plans. Those revenue tools she once deemed a necessary evil, for example, have magically blown away.

On the sweetness and light front, Stintz is clearly no sunflower.

Now that she’s no longer the only high-profile woman in the race, the snarly reputation Stintz is better known for showed itself Thursday upon Olivia Chow’s official entry into the mayoral sweeps. Apparently the Stintz camp has decided it needs to be nastier than the rest if their candidate is going to get noticed.

I’m no Don Guy or Dave Gene, the high-priced help that’s been hired to steer Stintz to victory, but how much traction the campaign will get positioning itself as Rob Ford light with a prettier smile seems more a crap shoot than sound political strategy.

Stintz was quick to jump onto that tax-and-spend socialist narrative Chow’s opposition seems intent on spreading. City Hall can’t afford a return to the days of David Miller, or so the theory goes.

Oh shit. The last thing we need is a mayor who actually understands the importance of investment in things like transit – under Stintz’s watch council’s subsidy to the TTC actually decreased. No, what the people really want is someone who’ll take care of the bread and butter issues, as Stintz likes to call them. As long as the garbage is picked up, who cares about Toronto’s international reputation right? Stintz might want to ask the money boys on Bay Street about that.

Perhaps Stintz’s jab was indirectly aimed at David Soknacki, the other conservative candidate, who ably served as Miller’s budget chief back in the day. But I digress.

On Friday, Stintz took to Twitter to claw at Chow again. This time she criticized Chow for declaring that she favours LRT in Scarborough instead of the three-stop “stubway” extension approved by council.

Stintz chastised Chow for being out of the loop, or just plain loopy on the subject. After all, Chow “has spent the last seven years in Ottawa,” while Stintz was working hard to broker the subway deal as TTC chair.

The Twitterati in the Chow camp went off the rails on that one, quick to point out the fact that Stintz supported the LRT plan before it became politically convenient for her to flip-flop. All true.

But I was more struck by the other bit of hypocrisy – the Stintz campaign’s official statement claiming that Chow is playing “old-fashioned politics” with transit of the kind “that pits the downtown against the suburbs.”

Well now, let’s decode that one. The LRT plan would reach more people, connecting more parts of Scarborough to transit and therefore the fabric of the city. That’s what Transit City was all about when it was conceived by Miller and Co. – linking the burbs to the rest of the city. It was as much a social justice as it was a transit issue.

That three-stop “stubway” extension will saddle taxpayers with property tax increases for the next 30 years. So who’s playing politics exactly?

Stintz is not the best person to claim any real connection to the burbs. Her sensibilities are clearly midtown.

Early in the campaign there was another tweet that got her in a spot of trouble. That, when she attempted to cast herself as everywoman: “I’m like you. I have a mortgage, kids, one car, and soccer games. Lets [sic] make it better.” Actually, that’s not the reality most folks are living in the have-not burbs.

Stintz said when she started the race that folks who’d never heard of her certainly will when it’s all over. She may be right, but for all the wrong reasons.