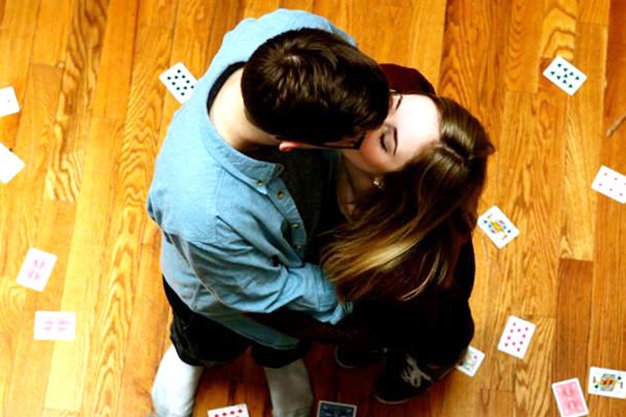 After selling out their run at the Fringe this past summer, the Howland Company had 52 good reasons to remount TJ Dawe and Rita Bozi‘s imaginative and touching relationship drama.

The concept is simple but powerful. It’s a pretty standard relationship arc following two 20-somethings – from coffee shop encounter to final embrace – but it’s divided up into 52 mini-scenes, with key words from each written on a different playing card. The deck is scattered and the scenes performed in random order. It’s modular theatre inspired by an iPod’s shuffle setting, and since four different casts take turns playing the couple at different performances, each show is unique (the one I saw featured Cameron Laurie and Hallie Seline).

The heart of the plot is a rocky romance, but there’s plenty of relatable humour. Anyone who’s been in a relationship will chuckle at the familiar foibles, frustrations and fears on display here.

Some scenes, like one about casual jealousy titled How Do You Know Her? are quick snapshots and get laughs from their deadpan brevity or by the sarcastic knowing smirk the performers sometimes share with the audience when retiring a scene’s card. Others, like one called First Time, reveal longer, deeper backstories for the characters and lead to intense emotional exchanges stemming from their seemingly incongruent hopes for the future.

In this performance, Laurie and Seline displayed palpable romantic chemistry but were just as effective in scenes taking place earlier and later in the story that required some cringe-worthy awkwardness. It’s easy to see how a different cast could put another spin on these moments, too.

Thanks to directors Courtney Ch’ng Lancaster and Paolo Santalucia, Laurie and Seline paced the performance so well that even though the scenes were in an order totally new to them, it didn’t feel random there was a clear beginning, middle and end. This is partly attributable to the human tendency to impose order on chaos, but also to the cast’s deep understanding of the material and extensive practice thinking fast on their feet about which sections of the story have been revealed and which remain to be told.

Unlike other recent attempts at shuffle-setting storytelling, 52 Pick-Up succeeds both as an intriguing theatrical experiment and moving narrative.