>>> Review: A Little Too Cozy marries Mozart and reality TV

A LITTLE TOO COZY adapted by Joel Ivany (Against the Grain). At CBC Studio 42 (25 John). Runs to May. 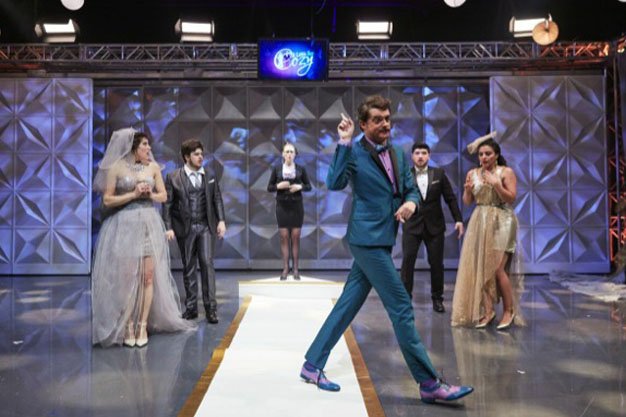 Opera meets reality TV in A Little Too Cozy.

A LITTLE TOO COZY adapted by Joel Ivany (Against the Grain). At CBC Studio 42 (25 John). Runs to May 21. $35-$95. againstthegraintheatre.com. See Continuing. Rating: NNNN

Against the Grain Theatre continues to make opera fresh, accessible and immediate with A Little Too Cozy, a reality-TV-dating-show-inspired take on Mozart’s Cosi Fan Tutte.

Director and librettist Joel Ivany‘s concept isn’t a gimmick, it’s appropriate. Cosi is Mozart’s cynical ode to romantic fickleness, a subject that’s right at home on shows like The Bachelor and The Bachelorette, where tests, temptations and lots of white wine can trip up contestants supposedly looking for true love.

Ivany deploys all of those things in his adaptation, which sees final two couples Dora (Rihab Chaieb) and Fernando (Aaron Sheppard) and Felicity (Shantelle Przybylo) and Elmo (Clarence Frazer) competing for $100,000 and a ring.

The betrothed haven’t met each other – they’ve only texted – but talent coordinator Despina (Caitlin Wood), along with sleazy host Donald L. Fonzo (Cairan Ryan), arrange it so the women meet two other men for dream dates while their “fiances” are away.

The logistics of the show-within-a-show don’t always make sense, especially during a silly (but not exactly funny) sequence involving tainted sushi.

But there are more than enough thrilling details to make this lots of fun.

The company has always found appropriate spaces to perform their works, and they’ve found a doozy in the big, airy CBC Studio 42, where supernumeraries can play black-clad TV crew members and we in the audience can feel like we’re actually at a live taping.

Snezana Pesic‘s sets and costumes are suitably brash and telegenic. But the venue’s high ceiling results in a loss of sound – this is one opera where mics might have improved things – making Ivany’s clever lyrics at times hard to hear. And the fine chamber orchestra, headed by conductor Topher Mokrzewski, is off to one side, creating an unbalanced sound.

What’s refreshing is that even with the updates and colloquialisms, Mozart’s glorious music – and the opera’s spirit – comes through.