Review: A Woman Is A Secret

A WOMAN IS A SECRET by John Patrick Shanley (Rip Jaw Productions/Storefront/SideMart Theatre Grocery). At the Theatre Centre (1115 Queen. 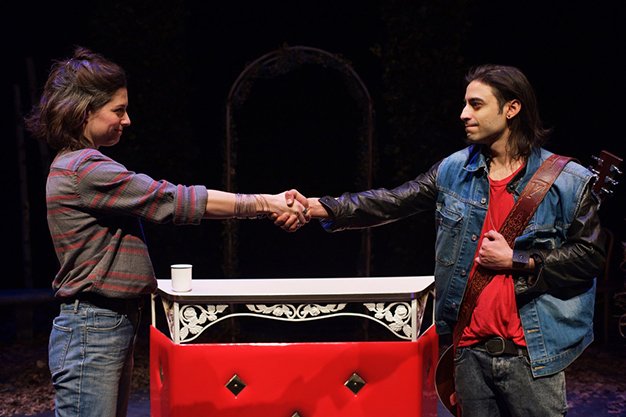 Katie Swift and Jade Hassoune spark off each other in A Woman Is A Secret.

Katie Swift and Jade Hassouné spark off each other in A Woman Is A Secret.

What a nice coincidence that the arrival of spring coincides with this warm and richly atmospheric production of six John Patrick Shanley shorts about love. Perfect to symbolize the end of that winter chill.

A co-production by three terrific indie companies – Rip Jaw Productions, Storefront Theatre and SideMart Theatre Grocery – A Woman Is A Secret benefits from sensitive direction by Andrew Shaver, who’s got a firm hold on the play’s tones and moods.

Shanley (Doubt, Moonstruck) is a first-rate writer able to set up situations, characters and conflicts in a few sharp lines of dialogue. Each piece has a fine dramatic arc and enough information about characters to lets us know where they’ve come from and where they’re going.

The night’s first half (each play takes about 20 minutes) is particularly strong, beginning with a piece about a bickering couple (Noah Reid and Karen Knox) whose encounter with a rude French server (Anna Hardwick) sheds light on their relationship. Second is a gem of a piece about two outsiders (Katie Swift and Jade Hassoune) who are waiting for their lives to begin. The third starts like a noirish two-hander involving a bartender (Trent Pardy) and a customer (Molly Flood), but takes a few sharp turns that are clever and deeply satisfying.

The highlight of the second half is a fascinating scene between a millionaire (Jonathan Higgins) and a pragmatic Polish emigre (Knox again) who knows what her assets are. And there are some lovely moments in the final piece, about a schoolteacher with the flu (Tony Nappo) and his encounter with a garden fairy (Martha Burns) who wants to have a child.

The only playlet that doesn’t work involves a former couple (Hardwick and Anand Rajaram) who reunite after she’s married someone wealthier. The writing feels too on the nose, and the performers lack chemistry.

It was a great idea to set them all in a garden, complete with trees, some scattered leaves and a trellis entrance where the characters make their appearances. As the show progresses, people who have appeared before stick around to watch or pluck an instrument or harmonize during a song.

Oh, yes, the music is a major part of this show’s magic. Before and after the plays, Matthew Barber sings standards in arrangements that make us see the works in a different light. Even during the plays he’ll offer up a jumble of notes to alert us to a switch in mood.

It all adds up to a magical, memorable night of theatre.