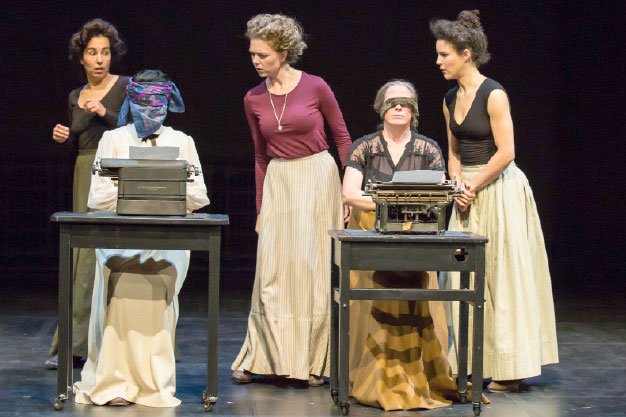 The release of the film Suffragette should raise awareness about England’s suffrage movement. So Factory’s revival of Linda Griffiths‘s 2007 play is a smart move. Not that the clever and engaging play needs the help of a substandard movie.

Set in 1880s England, Age Of Arousal centres around an all-female secretarial school run by the well-off Mary (Julie Stewart), active in the suffrage struggle, and her younger lover, Rhoda (Marie Beath Badian). They want to teach women modern skills like dictation and typewriting (!) so they can become economically independent.

Enter the Maddens, three sisters whose father has died and left them nearly destitute. The older siblings, Alice (Juno Rinaldi) and Virginia (Aviva Armour-Ostroff), aren’t sure how to get by since they’re beyond marriageable age and grudgingly sign up for lessons. But the youngest, Monica (Leah Doz), is busy flirting with men, including Mary’s cousin, the physician Everard (Sam Kalilieh), who also has an eye on Rhoda.

The period setting lets Griffith riff on lots of things, including contraception, the words “old maid” and “spinster” and the image of the fainting woman, which provides a hilarious – and very physical – end to the first act.

The cast is mostly first-rate. Rinaldi and Armour-Ostroff bite lustily into their showy roles, especially the latter, whose Virginia is amusingly fierce and frustrated before moving to Berlin, where she discovers another part of her identity. Doz’s presence and concentration draw your eye to her constantly, while Kalilieh makes the heavy lifting required of the sole male onstage seem effortless.

The relationship between Mary and Rhoda, however, doesn’t resonate as it might. (Is Griffiths saying something by naming them after two iconic 70s TV characters?) And Badian’s shrillness and wavering English accent don’t help matters.

But this is a fine play, and director Jennifer Brewin, working with a stripped-down set as part of Factory’s “Naked” season, manages to tell it with a lively spirit and intelligence. The lack of a set – there are some tables and benches – is bad for acoustics. But the space works beautifully during a scene set at an art gallery.