ANGELIQUE KIDJO and HSAO at Koerner Hall, Saturday, November 7. Rating: NNNNGetting a Koerner Hall crowd out of their cushy. 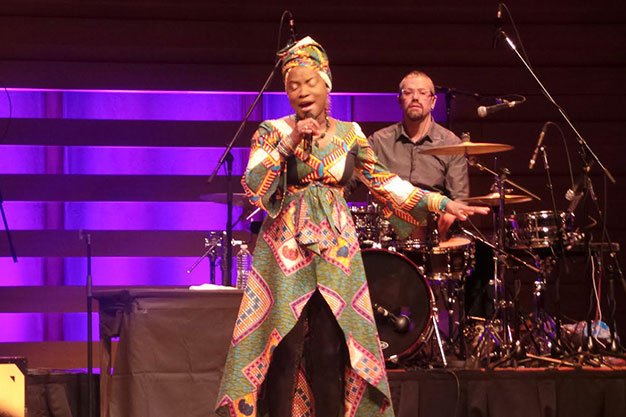 Getting a Koerner Hall crowd out of their cushy seats and dancing in the aisles is challenge enough. Getting the entire room on their feet, and then a good portion of them filling the stage, taking turns showcasing their moves, is even more impressive.

Benins Afropop legend Angelique Kidjo was a ball of tireless energy on Saturday night, and so was her very capable four-piece backing band. The impromptu show-ending dance party came after an hour and a half of their careful cajoling for the room to let loose Kidjo and crew leading by example, constantly moving and shaking across the stage, thanks in part to two drummers (one on bongos) keeping lively rhythm.

But the most compelling moments musically maybe because they were so infrequent were when Kidjo stood still and slowed down, and her guitarist traded his electric instrument for an acoustic one to accompany her. Eventually the rest of the band would join in, but not before Kidjos clear, calming vocals which were at times unfairly competing with the band were front and centre. A song meant to be from the perspective of a 13-year-old girl crying for help before marrying a man older than her father was poignant and powerful.

Between songs, Kidjo was unwavering in her ability to deliver messages of female empowerment, whether she was talking about teenage pregnancy, genital mutilation or women being the first casualties of war and the last ones at the table during peace negotiations. Her knack for so smoothly conveying such wise, serious and inspiring words somehow in lighthearted, funny ways between her sunny zouk-, reggae- and rumba-influenced tunes, all while keeping the mood and energy levels consistent, is a testament to her 30+ years of performance experience.