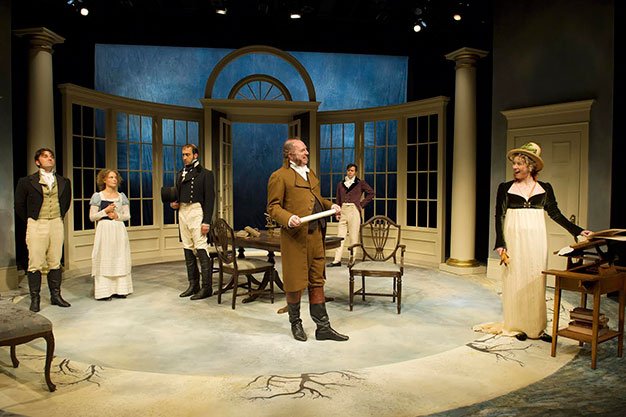 If you like to exercise your mind at the theatre and not merely be entertained, you wont find a better show than Tom Stoppards Arcadia, a 2013 Shaw Festival production that David Mirvish has brought to the Royal Alex.

In the 1990s, writer Hannah Jarvis (Diana Donnelly) pursues the history of a mysterious hermit who lived on the estate centuries earlier, while smug, self-centred academic Bernard Nightingale (Patrick McManus) tries to prove that Lord Byron was involved in a deadly duel there in the same period.

Each story feeds the other, Stoppard offering tantalizing bits of information that fill in the plot, occasionally providing red herrings as well.

Though the first scenes tempos are sometimes off and could be more focused, director Eda Holmess production is a model of clarity in terms of the various topics and plot lines. When, in the last half hour of the show, the two time periods share the stage, lines have been drawn so precisely that theres no blurring except at one moment when Stoppard intends it.

The Shaw actors are always a pleasure to watch, and for those theatregoers who dont get down to Niagara-on-the-Lake, the company defines what a strong performing ensemble should be.

Besworth is a curious, charming, determined Thomasina, whether shes wondering about the meaning of carnal embrace or trying to prove a mathematical formula, and Powells subtly seductive tutor clearly pulls in every female in the house. Underhays pert smile doesnt cover her demanding, jealous nature, while Bunkers versifier is a comic dunce more concerned with flattery than with his wifes reputation.

Some of the best scenes involve Donnelly and McManus, who set off dramatic sparks whenever they go at each other in rat-a-tat dialogue. Complementing their work is that of Harveen Sandhu as a young 20th century Coverly, whos as excitable as the 19th century Thomasina, and Martin Happer, a cool statistician who, like his ancestor, plays with equations.

Smart, surprising and cleverly plotted, Arcadia offers a fine workout in a theatrical gym that touches the heart as well as the brain.