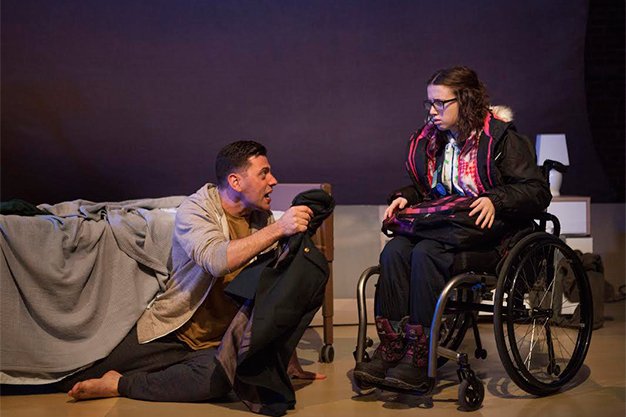 Every week in an Ottawa hospital, a schoolgirl eager to get one of her Girl Guide badges reads to a Canadian soldier who fought in Afghanistan. A simple set-up, but Colleen Murphys Armstrongs War uses it for a moving exploration of bravery, honour, hope and the power of writing.

The overachieving and endlessly positive Halley (Alex McCulloch), whos in a wheelchair, chose Michael (Paolo Santalucia) as someone to read to because they share a last name, Armstrong. On the surface, his wound isnt serious, but theres also an emotional scar he keeps to himself. Though only 21, Michael already has too much knowledge of life and death.

The two have secrets they dont want to look at and that come to light over the course of the show, Murphys adept script allowing those mysteries to surface in a believable way that deepens each character.

As they read Stephen Cranes Civil War novel The Red Badge Of Courage together, Michael is inspired to write his own grim war story, which in turn is countered by Halleys more optimistic and though shes not aware of it, also humorous version of the events.

With Ken Gasss sensitive direction, the production draws us into the pairs confrontations. Neither wants pity, and each, in her or his own way, looks toward a future that assuages past pain.

Marian Wihaks set, lit expressively by Rebecca Picherack, moves the action easily from the hospital room to the Kandahar desert and a limbo-like, meditative space.

Santalucia offers the more rounded figure, often throbbing with unspoken emotion and a fiery anger that explodes when Halley touches sensitive memories. We even watch Michaels leg injury heal as one scene moves into the next the play is structured by the weekly reading sessions.

McCulloch captures the motor-mouth preteen in early scenes, concerned only with her own issues, but she could bring more nuance to the role later in the play. She shines, though, reading Halleys story, which reveals as much about the 12-year-old as about the characters she describes.

Armstrongs War explores with compassion and an understanding of what its like, on several levels, to be in battle and suffer for that conflict, no matter what the outcome.