BEDROOM FARCE by Alan Ayckbourn (Soulpepper). At the Young Centre for the Performing Arts (50 Tank House). Runs to June. 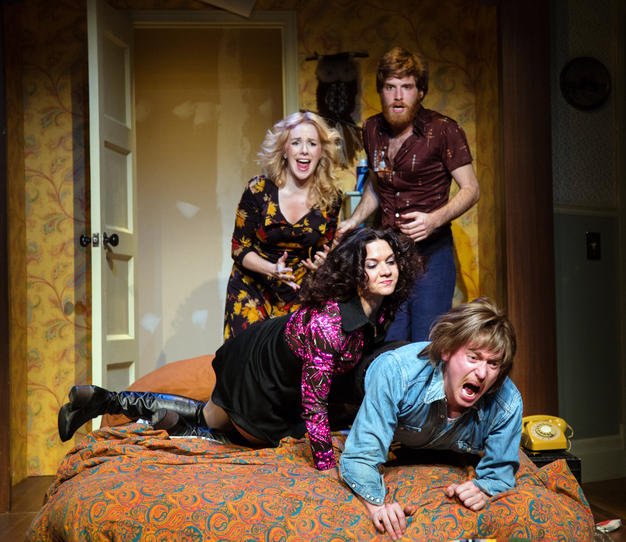 After Soulpepper‘s hilarious production of Alan Ayckbourn‘s The Norman Conquests, a trilogy of interconnected comedies, their take on the playwright’s Bedroom Farce doesn’t quite pay off in laughter as it should.

The premise is there in the title. Over one night, four couples experience farcical ups and downs. The older Ernest (Derek Boyes) and Delia (Corrine Koslo) are celebrating their anniversary, but their post-dinner sleep is interrupted by the goings-on of their son, Trevor (Ron Pederson) and his current wife, Susannah (Amy Matysio), whose fighting has earlier spoilt a party thrown by Kate (Katherine Gauthier) and Malcolm (Gordon Hecht) because Trevor has paid attention to his ex, Jan (Caitlin Driscoll). Jan’s boyfriend, Nick (Alex McCooeye), meanwhile, is back in the couple’s bedroom nursing a bad back.

Four couples three bedrooms sexual jealousy a bit of skin groovy 70s fashions: it should be a no-brainer. But while there’s lots of fun watching the silly plots unfold, much of the humour seems forced. And the situations – particularly the construction of an Ikea-style piece of furniture – are far-fetched even for farce.

The Malcolm-Kate relationship is the least defined, which is problematic because their bedroom is in the centre. And neither Hecht nor Gauthier has much to do or say.

Pederson is better as the floundering Trevor, who’s oddly well matched with Matysio’s high-strung Susannah. And although he’s stuck in bed for much of the two-hours-plus running time, McCooeye demonstrates impeccable timing and physical grace.

Boyes delivers another of his stiff-upper-lip Brits, but the best performance comes from Koslo, who perfectly understands the rhythms and inflections of this kind of play. It’s a wildly funny turn, and you don’t notice that she’s trying.

Director Ted Dykstra orchestrates the action skilfully on Ken MacKenzie‘s delightful period set, particularly during the party as coats are flung on the bed to announce the arrival of unseen guests (and then taken off as those guests, upset by the fighting, leave.)

Creighton Doane‘s delightful score and sounds evoke the mindless fun of a 70s game show and prime us for fun more successfully than some of the writing and acting.