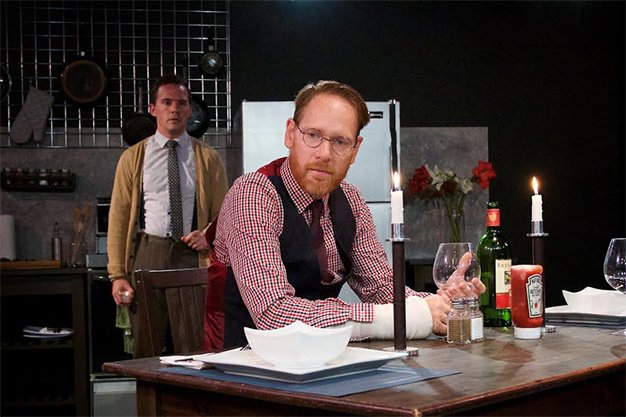 And then it goes far away from the ordinary, especially given what or who is on the menu.

Gordon (Andy Trithardt) has written a personal ad seeking a well-built man willing to be slaughtered and eaten. The empty refrigerator is ready to be filled with appropriate body parts. The shy Henry (Daniel Pagett) shows up at Gordons door, though he doesnt fit the bill in terms of body type.

Oh, and theres an unexpected visit by Gordons mother (Maria Ricossa), who just happens to pop by.

Its arguable that theres another character, too: the audience, who are witnesses to what Gordon intends to do. He and the others regularly break the fourth wall to address us.

What follows, with the central narrative based on a true story, is an often funny evening of courting, backing-and-forthing, a discussion of sexual orientation and a few instances of potential gross-out activities.

Taylor adds another layer to the action, cleverly building in moments of magic realism and thoughts about reality and memory that give nuance to what were watching.

The success of the show lies in the chemistry between Trithardt and Pagett, excellent at defining their characters push-pull relationship, right down to the final moment of tenderness between this symbiotic pair. What they do is unusual, but we can easily understand their basic motivations and emotions.

Trithardts Gordon is alternately coaxing, demanding, charming and whiny, depending on his mood and focus on his culinary goal. He also plays the audience with skill, sharing philosophical thoughts with us and sometimes taking a viewers laugh and building it into the dramatic moment.

In Pagetts hands, the initially nervous Henry finds freedom and peace, at least initially, in lots of wine and pain killers. We eventually learn he has a tragic back story, but not before we watch the dinner go through a wide variety of mood swings.

Director Kat Sandler, so skillful at helming her own scripts, here conducts the plays rhythms with style, pacing the flow so that moments vibrate between the comic and the upsetting.

The only problem is Gordons condescending mother, who metaphorically runs her white-gloved finger over her sons psyche and finds it far from clean. The hitch isnt Ricossas chic performance but rather the use Taylor makes of the figure. Striking in her first few minutes onstage, the character unnecessarily makes her dramatic point several times over. Still, Ricossa has a few fine moments near the shows end, coaxing out Henrys history and helping wrap up the narrative.

The design team also contributes to the evenings success, including Tim Lindsay, whose sound design underlines the action with some ironic romantic pop melodies, Jenna McCutchens set, in which the everyday can flow into the grotesque, and Melissa Joakims lighting, which helps define the jumps from one reality to another.

Big Plans offers a succulent comic evening, especially if your theatrical taste runs to the unusual.