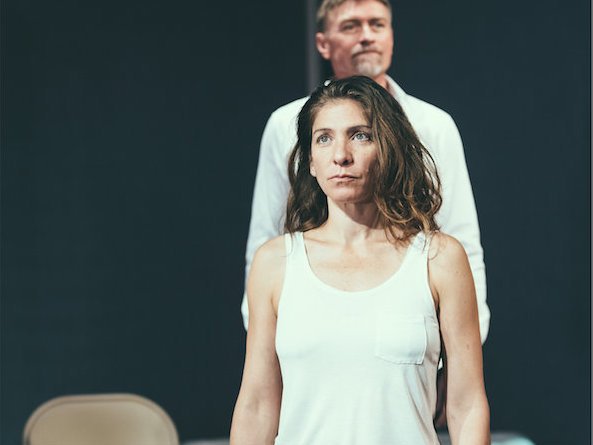 The political becomes very personal in Body Politic, Nick Greens look at the Toronto publication that helped define the Canadian queer community in the 1970s and 80s.

Chronicling the 16 years from the rise of the BP collective to its dissolution, Green focuses on a few memorable episodes, notably the 1977 article Men Loving Boys Loving Men and the 1981 bathhouse raids, which prompted the BP to help mobilize a substantial rally against the police.

Providing a context for the material is a contemporary story involving Phillip (Geordie Johnson), one of the magazines founders, and Josh (Aldrin Bundoc), a young barista he picks up. Their intergenerational discussion, which often becomes an argument, offers two different viewpoints about being queer.

We also meet, as Phillip recalls them, the Marxist Calvin (Jonathan Seinen), the angry Steven (Cole Alvis), partners Victor (Alvis) and Brian (Craig Pike), and Deb (Diane Flacks), the only woman on the BP collective.

This is a play about memory, and as Phillip wanders in and out of his, past and present blur. Some of Greens best writing involves Phillips two worlds echoing each other, sometimes with the older mans ghosts watching Josh. The playwright also nicely captures the excitement of the BPs first issues, presented as a counterpoint of overlapping voices.

Its perhaps understandable that a history this size cant be fully played out in a two-hour show some of the characters could be fleshed out more and some issues be further developed.

The office raid and trial following the publication of Men Loving Boys Loving Men doesnt cut as sharply as it might would some sort of staging rather than just a narration help? but the conjuring up of the brutal bathhouse arrests and subsequent demonstration is exhilarating.

The show has wit and heart, much of it brought to life through the relationship between Phillip and Deb. Under Alisa Palmers direction, both Johnson and Flacks nail their characters.

Johnson captures the intellectual who is nervous and awkward in social situations but whose passion sometimes explodes with excited anger. Flackss Deb is a poet with a sense of humour, and though she sends Phillip up, loves him deeply, just as he loves her.

Her fiery speech bringing together and inspiring the various individuals at the bathhouse demo is a highlight of the production, as is the confrontation she has with Pikes Brian over the involvement of women in the movement.

Greens frame narrative, in which both Phillip and Josh learn something, is as vital as the tales from the 70s and 80s. For some, this will be a reminder of history for others, an important history lesson.