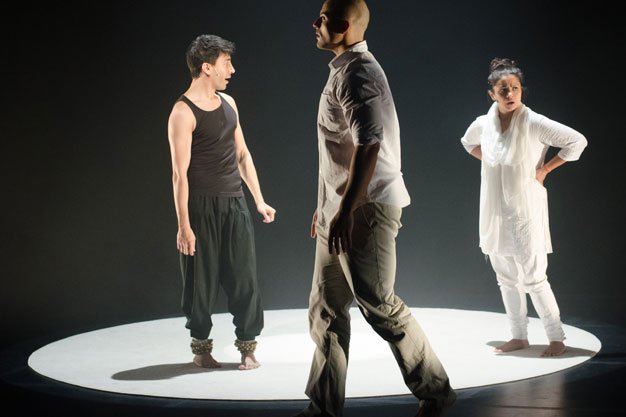 Inside the Factory Theatre Mainstage space, you’re surprised by a thick fog engulfing the room, but from the moment Bombay Black begins, this visually stunning and beautifully acted production shines through the haze.

Poetic and haunting, the play is set in modern-day India in an apartment shared by an exotic dancer named Apsara (Kawa Ada, in non-traditional gender casting) and her mother, Padma (Anusree Roy). When Kamal (Howard J. Davis), a blind stranger, shows up to engage Apsara’s services, he reveals long-concealed family truths that alter everyone’s life.

Director Peter Hinton originally conceived this revival of Anosh Irani‘s play with an all-male cast, but a last-minute production change brought in Roy as the mother. She excels here, slowly unleashing her scorn for her daughter and society. Padma seems to inflate with power when she believes her revenge is near, then deflates with the pain of being forced to relinquish control. The character could have been more nuanced in the script, but Roy’s rich performance makes sense of this emotionally barren mother’s cruelty.

With dignity and grace, Ada transcends gender as the female dancer. Bells encircling her ankles add a dimension of sound and give the appearance of shackles. Ada also choreographed the production, with evocative dances that highlight the growing connection between Apsara and Kamal. Davis’s mythic blind soothsayer inspires both Apsara and the audience to question their beliefs as the story unfolds.

Gorgeously lit by Jennifer Lennon, Hinton’s production plays with illumination, darkness and shadows. Kamal’s monologue about living in blindness gets recited in the dark. Spotlights pick up swirls of theatrical haze, conjuring drugs, pollution and the dreamlike qualities of Irani’s words. The elaborate lighting eradicates the need for a set. And Hinton’s unhurried pacing ensures the audience absorbs every detail and dramatic turn.