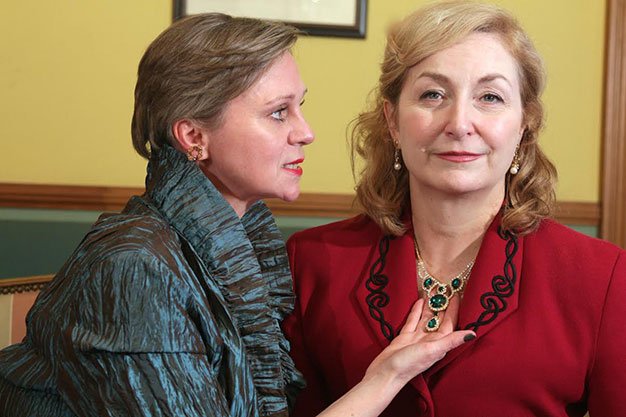 In David Mamets hands, theres nothing bitchier or funnier than a pair of former lovers, one of whom wants to make up and the other who has an itch for the taste of younger flesh.

Boston Marriage, an old-fashioned term for two females who live together, is a Mamet rarity: a play for three female characters that has the same zingy dialogue as his more testosterone-fuelled scripts. Here, though, its often expressed in the formal rhythms and arch vocabulary reminiscent of a writer like Oscar Wilde.

The two protagonists are Anna (Catherine McNally) and Claire (Deborah Drakeford). The former has recently acquired a male patron along with a fabulous emerald necklace. The latter, who hasnt seen her older companion for some time, wants to bed a young acquaintance in Annas house, using Anna as her beard.

They are constantly arguing over past peccadillos, slagging each other and trying to make up age is often used as the metaphoric slap across the face. When Claire calls Anna an evil old bitch, Anna responds that she isnt old, or maybe only a bit older than Claire. What? responds Claire. Have they repealed the calendar?

Mamet cleverly mixes this waspish pair with Annas seemingly inconsequential maid (Charlotte Dennis), who brings tea and lets them know cook has quit and that the stove needs mending. Her superiors never miss a chance to belittle or condescend to her, but she eventually plays a crucial part in their lives.

Director Kelli Foxs fine production, performed in the elegant drawing room of Campbell House, blends 19th century period costumes (by Laura Gardner) and carefully modulated rhythms into an entertaining and at times thoughtful look at relationships and what it means to grow old gracefully.

The company handles the sometimes anachronistic dialogue with sharp zest. At first ingratiating and then betrayed, McNallys put-upon Anna is quite the drama queen, but theres method in the madness of her over-the-top pronouncements. Drakefords sensual Claire, determined to have her way, shoots telling glances at the audiences when she scores a point.

And dont count out Catherine, the servant whose betters constantly mistake her name and her country of origin. Shes more aware and knowledgeable than they suspect, and in Denniss performance the supposed underling both deflates the others lofty words and proves her worth in furthering their plots.

Its Catherine, too, who has a few secrets of her own, offering truths about the nature of relationships. Her thoughts help prepare for an ending that never loses its love of language and proves both wise and sweet in suggesting a rapprochement between the two women of fashion.