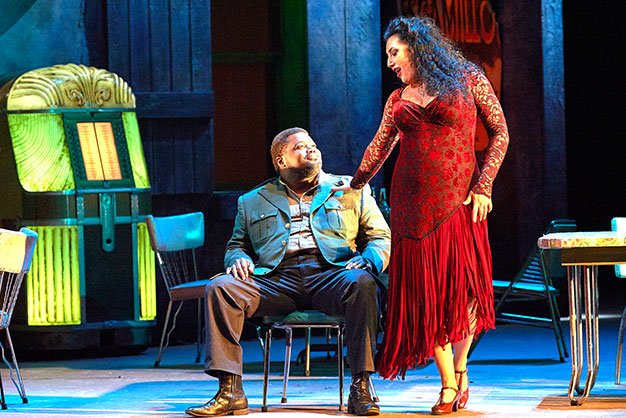 Carmen, Bizet‘s tale of lust, jealousy and death, is one of the most popular operas in the repertoire. Director Joel Ivany doesn’t do anything particularly innovative with it, but he does offer up a clear, persuasive take that’s missing only some fire.

If you want hits, Carmen delivers them, from the dangerous title character’s seductive Habanera and Seguidilla to bullfighter Escamillo’s strutting Toreador Song.

While Anita Rachvelishvili (who alternates in the title role with Clementine Margaine) has a smoky, mysterious presence and a powerful voice (even if it’s a tad wobbly on top), she doesn’t exactly exude sexuality, and one of the problems with this production is the lack of chemistry between her Carmen and Don Jose (Russell Thomas), the stolid corporal she’s supposed to seduce and enrapture.

Ivany has difficulty moving big crowds on and off the stage, but when it comes to the central story, he makes sure the audience knows what’s going on. The final act is stunning, as Ivany, with a nod perhaps to Julie Taymor’s The Lion King, has his cast and extras – hawking everything from toy bulls to cigars – walk through the theatre and down the aisles for the lead-up to the climactic bullfight. It’s a brilliant touch.

As the opera progresses, and the stakes get higher, Rachvelishvili and Thomas heat up dramatically. And Simone Osborne and Christian Van Horn are expressive actors as well as singers as Micaela and Escamillo.

Conductor Paolo Carignani draws some beautiful colours from the COC Orchestra, but the tempi could be livelier, and overall there should be more dramatic range. My test for any production of this familiar opera is the lesser-known quintet in the second act, which should sparkle and shimmer and make you smile.

Under Carignani, it’s merely pleasant. Just like this production.