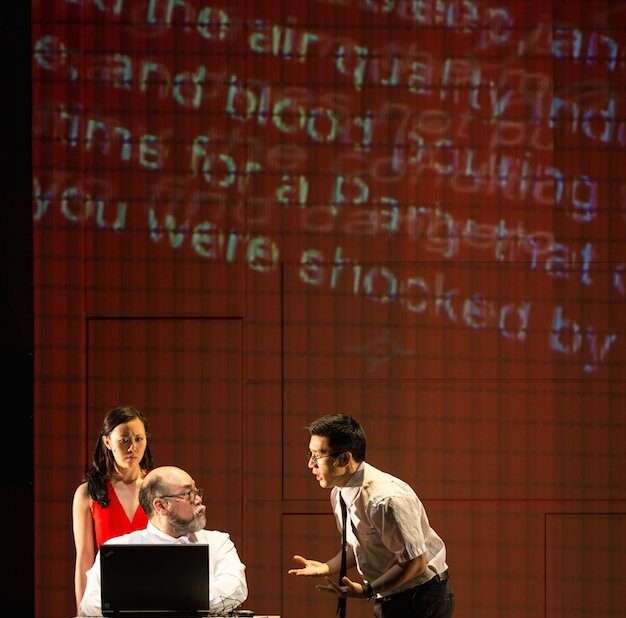 Lucy Kirkwoods Chimerica has a good story to tell actually, a few of them, including a suspenseful thriller but the central narrative and figures are too often sidelined by overblown writing and production.

The title is a nod to the contemporary connections and contrasts between America and China, involving individuals, economics and politics.

At the plays centre are photojournalist Joe Schofield (Evan Buliung) and Zhang Lin (Paul Sun-Hyung Lee), who meet soon after the 1989 Tiananmen Square uprising. During that historic episode, Joe was in the right spot at the right time to shoot the iconic image of the Tank Man, who confronted a series of government tanks sent to put down the student protest.

Twenty-three years later, when Joe visits Beijing, Lin suggests that Tank Man is still alive. Eager to discover the anonymous figures identity and believing that he now lives in the States, Joe sets out to find him.

That story has a number of related narratives, including Joes involvement with his pressured editor (Ross McMillan) and with Tessa (Laura Condlln), a business analyst testing the Chinese market for Western sales. Lins life is intertwined with that of his brother, Zhang Wei (Richard Lee) and his ailing neighbour, Ming Xiaoli (Diana Tso), but just as important are memories of his earlier self (Norman Yeung) and his girlfriend, Liuli (Jasmine Chen), whose lives together play out before Lins eyes.

Judith Bowdens turntable set and massive central wall seem never to stop moving, which is eventually a distraction, and though Michael Waltons lighting and Deco Dawsons outstanding video design define the plays many locations, I wish the story were told more simply.

The result is that we end up not caring about several of the key characters, a problem not with the performers but rather the writing. The Americans are largely two-dimensional, though Buliung and Condlln do what they can with their back-and-forth romance.

Buliung captures Joes self-centred aspect well, including the photographers belief that his actions are motivated by compassion. Condlln has the plays most striking speech, which looks at Western merchandizing in China its a nuanced monologue that lets us into her growing humanity and angst and makes surprising use of the Tank Man photo.

The key Chinese figures are better developed: theres real feeling in the relationships between the Zhangs, Lin and Ming Xiaoli, and the young Lin and Liuli.

But the thriller aspect has a payoff, thanks in part to Paul Sun-Hyung Lee. Zhang Lin, who begins as agreeable, funny and friendly and turns into a rebel who accepts the tragic consequences of his actions, is developed both in the writing and in the actors heartfelt performance. His arc is a rich emotional journey that lets us peer into the mans soul.