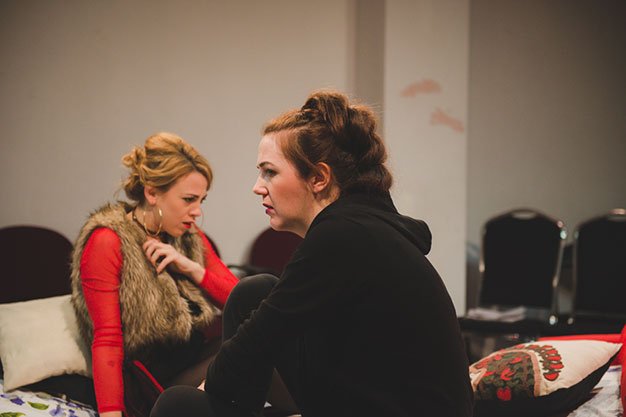 Three indie companies Soup Can Theatre, safeword and Aim for the Tangent use a theatrical daisy chain to link four plays in Circle Jerk, staged in the intimate lemonTree Studio.

Last summer the groups asked members of the public to suggest lines of intriguing dialogue that the three playwrights would use in their new scripts.

The final line of one play would be the first of the next, and the final play would conclude with the opening line of the first production.

Its a clever concept, and the evening includes some live chamber music also inspired by those four lines of dialogue.

The pieces of music share a playfulness, though of different sorts. They start with a sweet, Clair De Lune-ish composition by Marla Kishimoto that turns intentionally comical when a clarinet goes off-key, followed by Pratik Gandhis sometimes meditative, sometimes jazzy score preceding the second play. Later in the evening we hear Peter Cavells piece, full of dissonance, organic sighs and a climax, and Patricia Stevenss melody, which begins with an Irish lilt before it turns disruptive in terms of the sound and action by the musicians.

The plays, all of them two-handers, are more of a mixed bag.

Writer/director Justin Haighs The Session presents a confrontation between a sharp-tongued nuclear safety-system supervisor (Allan Michael Brunet) and a young, calming therapeutic workplace counselor (Matt Pilipiak) trying to help the angry older man deal with a personal problem. Despite some good lines, the show rarely moves beyond a talking-heads presentation Pilipiaks performance is fine but Brunet could be less stiff.

Scott Dermodys Dust Peddling: Part II, directed by Joanne Williams, deals with bondage, meditation and yoga, not necessarily in that order. A man (Dermody) and a woman (Lisa Hamalainen) work out a sexual contract, the audience positioned as voyeuristic observers of the close-up action. Dermodys writing is imagistic and alliterative, with allusions to Alan Ginsberg and Wikipedia’s discussion of orgasm. The two actors work well together, but the text is sometimes too dense to take in on a single hearing.

The piece goes on a scene or two longer than necessary, but under Crones direction, the actors exhibit a lot of skin along with an entertaining chemistry and shared dirty talk. A banana is central to the action dont expect it to remain in its skin and Plouffe does a very funny dance near the end.

The best show is Wesley J. Colfords Sex And This which, despite its title, has little to do with sex and more with attitudes toward death and the surprises that life tosses us. Two friends (Tiffany Deobald and Carys Lewis) are about to go off to a party when they learn a friend has met a tragic end. What should they do? Attend the party? Mourn? Tell others? And if so, how?

Along the way, the dark comedy also explores social media as well as this isnt as strange as its sounds a link between vodka and tampons.

Director Jakob Ehman gets fine work from Deobald and Lewis he handles Colfords witty script with fast-moving energy but isnt scared to make effective use of silences, too.

Aim for the Tangent Theatre safeword Soup Can Theatre