NOW MagazineCultureMusicals>>> Review: Come From Away tells an energetic, heartwarming tale about 9/11

>>> Review: Come From Away tells an energetic, heartwarming tale about 9/11

COME FROM AWAY by Irene Sankoff and David Hein (Mirvish Productions and others). At the Royal Alexandra Theatre (260 King. 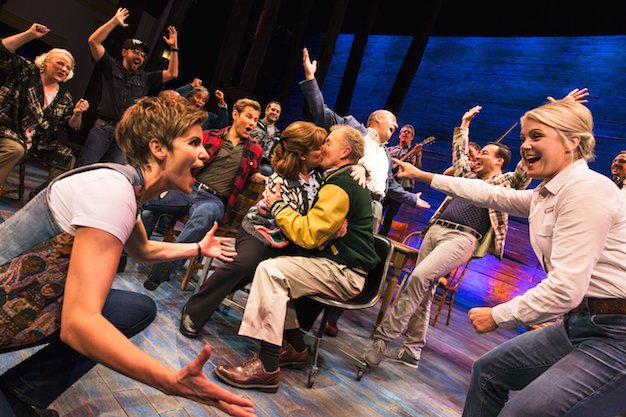 Need a show to lift your spirits? Head over to Come From Away, an upbeat, inspirational and often rollicking demonstration of the hospitality of Newfoundlanders.

Based on the true story of how the residents of Gander provided food, lodging and warmth to the passengers of 38 planes forced to land at their airport immediately following 9/11, Irene Sankoff and David Heins musical is worth celebrating.

A Canadian show developed locally at Sheridan College with the help of Michael Rubinoff and heading to Broadway next year, it features a finely tuned ensemble of performers, backed up by first-rate musicians under Ian Eisendrath. The production gets a magical staging by director Christopher Ashley and choreographer Kelly Devine.

I wasnt drawn in right away, despite the lively opening number. I found the jokes corny, the characterizations broad. But when we met the passengers who land unexpectedly in Gander for reasons they dont yet know, the details of characterization grew sharper natives and visitors all became more real.

The cast of 12 morph into dozens of characters, each actor creating memorable figures we believe in and care about.

Theres Petrina Bromleys Bonnie, in charge of the local SPCA and worried about the animals on the planes Jenn Colellas Beverley, a pilot concerned about her passengers as well as her family in the States Rodney Hicks as a black American dubious about the local hospitality Kendra Kassebaum as the towns only TV reporter Chad Kimball and Caesar Samayoa as a gay couple, both named Kevin, uncertain about how unsophisticated backwater Canadians will react to them Lee MacDougall and Sharon Wheatley as passengers drawn to each other, despite their differences Astrid Van Wieren as a schoolteacher with a big heart Q. Smith as a New York mother anxious about her son Joel Hatch as Ganders multitasking mayor and Geno Carr as its town policeman.

There are many fine, emotionally true moments, among them Van Wieren and Smith commiserating as mothers of firemen the treatment of an Egyptian (Samayoa) whos looked on suspiciously because people think him a Muslim different cultures who dont speak the same language communicating by means of a Bible and Colellas feminist song about how she became a pilot and what the legacy of September 11 means for her.

This is a true ensemble show: theres hardly a song that doesnt become a group number, with everyone contributing to the storytelling.

And speaking of contributing, pay attention to Beowulf Boritts design, which features a barnboard backdrop and a forest of trees with roots that spill over the stage into the audience two of the trees, raggedly chopped off, suggest the World Trade Centers twin towers.

Sadly, the one aspect of the show that doesnt succeed is its tunes. While the lyrics are strong and the plot engaging, in many cases the music doesnt stand out. There are exceptions, such as the bar number where several visitors become honorary Newfoundlanders, and a multicultural prayer scene in the midst of this turbulent world, but theres little else thats memorable.

Even so, Come From Away, enthusiastically performed and splendidly staged, will bring you to your feet for the curtain call, applauding along with the rest of the excited audience.