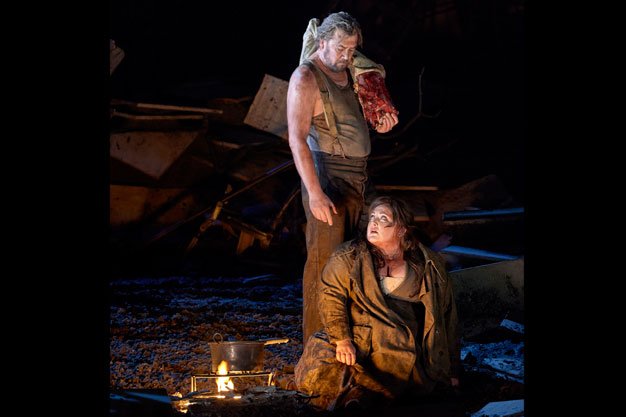 Dimitry Ivashchenko and Heidi Melton lustily bite into their roles in Die Walkure.

If Wagner‘s Ring Cycle is the Mount Everest of opera, Die Walkure – the second of the cycle’s four works – is the most popular part of the climb. It features the best known “numbers,” including the immortal Ride Of The Valkyries, and the fewest slow patches. Sure, it takes a while to scale – four hours and 45 minutes, including two intervals – but the Canadian Opera Company‘s revival is a thrilling musical drama.

That’s evident from the first notes, when conductor Johannes Debus and the 110-piece COC orchestra confidently and precisely attack the score to evoke a trek through a forest, which will eventually lead to incest between twins (twincest?), a fight to the death, a marital squabble and a very moving scene between a Norse god and his fierce warrior daughter.

This production, directed by filmmaker Atom Egoyan and designed by Michael Levine, needs to be seen in the context of the entire Ring to be fully appreciated. (Next season the COC’s remounting the third work, Siegfried.) But you can glean ideas about change, the move from the stuffiness and constraints of the Victorian era – represented by restrictive bustles and grand white doors that represent the old guard, Valhalla – to the twisted jumble of iron and metal of post-industrial-age warfare.

Wagner’s epic drama deals with archetypes, and there are plenty of symbols that need no explaining: swords removed from trees, fire that only the true hero can cross and a ring as all-powerful as the one found by Frodo. These things are directed with clarity so general audience members will feel them in their gut. I’d forgotten how powerful a bit of staging involving fire near the end was it works on a narrative and emotional level.

And recurring leitmotifs in the score – did I mention how great the orchestra sounds? – tell you a lot about what’s going on.

Then there’s the singing. You need stamina, power and authority to ride over those rich, complex harmonies and make these characters come fully alive. In the masterpiece of a first act, Clifton Forbis, Heidi Melton and Dimitry Ivashchenko bring Game Of Thrones-worthy earthiness to their dangerous love triangle, the passions clear and palpable.

Janina Baechle and Johan Reuter make the struggles of their battling couple, Fricka and Wotan, funny and effectively cringeworthy. And Wotan’s fierce warrior brood, the Valkyries, are lively and characterful, their voices meshing in an unbelievable swirl of sound.

But it’s Christine Goerke‘s Brunnhilde who emerges most triumphant. With her silvery voice, flashing-eyed dramatic instincts and reserves of power, she’s an ideal Wagnerian soprano. After she’s done singing, it’s a surprise to discover the Four Seasons roof is still there.